December at Dungeness and Rye

Work and weather seem to have been against me this month and I’ve only managed a couple of trips out.

I’m probably in the minority here but I love this time of year and especially when the temperature really takes a dive. The addition of frost and the fantastic sunrise and sunset lighting always give me good ideas for what I’d like to attempt to photograph. There have only been a couple of small cold snaps down here in the South and they have yet to freeze over any larger water bodies. When the larger lakes freeze it often changes the behaviour of some birds that are normally difficult to see as they come out into the open to forage. Bittern and Water Rail are good examples of this. I might not have had the frost but the lighting was certainly fantastic on my first morning out to Rye. 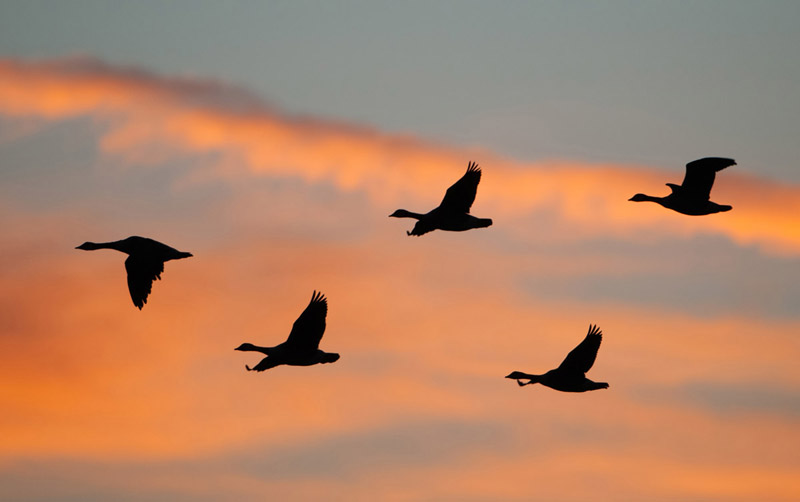 I find it difficult to get good images of flocks of geese despite there being great numbers around at this time of the year but really liked this image for the lighting and the shapes of the geese.

I also have a favourite spot at Rye to attempt to photograph the Barn Owl. I never tire of trying to get images of these amazing birds and I’m often there before sun up when the bird is just an ethereal white shape gliding in the half light. Anyone who is involved in wildlife photography will be more than aware that often the best laid plans lead to no photos as your target species either doesn’t turn up or won’t come close enough for decent shots. I mentioned earlier about frosty images and perfect light and whenever I see the post in the following shot I am reminded of several days where I stood hidden and motionless pre dawn,  in sub zero temperatures, watching an incredible sunrise over frost bitten fields only to be staring at a blank post the entire time. The perfect image was there, it was just missing the owl! 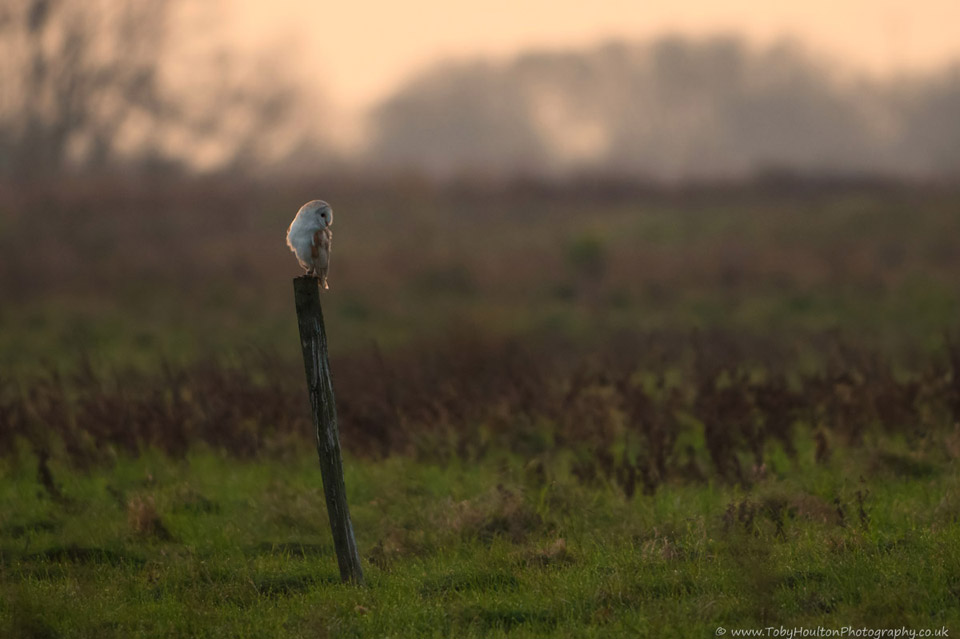 Having heard reports of a Bittern being seen, my next stop was the hide at Castle Water. My wife and I crept in, making as little noise as possible and I slowly opened one of the windows. The first thing that caught my attention was a Little Egret fishing the margins just over to the left and close enough to get some great images. At this point I was moving very slowly at full stretch to lock the window in place when I looked ahead to see a beady pair of eyes staring right back at me. The Bittern was in the closest reeds and I had been spotted. It’s at these moments when you just hope it’ll ignore you, I even slowly looked half away so that I wasn’t making eye contact but the Bittern had other ideas and launched from the reeds as I was still in (slow motion) full stretch. The chance of photographing a Bittern at close range are few and far between so I really wasn’t impressed with myself that I’d just ruined an opportunity. To top it off, the Little Egret also took it’s cue from the Bittern and was gone. ARGH!

I didn’t give up however and continued waiting in case the Bittern decided to drop back in. I’d love to be able to say it did but it actually stayed on the other side of the lake for the next couple of hours. I took a couple of shots of it “hidden” in the reeds and when it looked like it was about to move I trained the camera on him and waited until he took off (I say he – I have no idea how to sex a bittern! maybe I should look that up) – 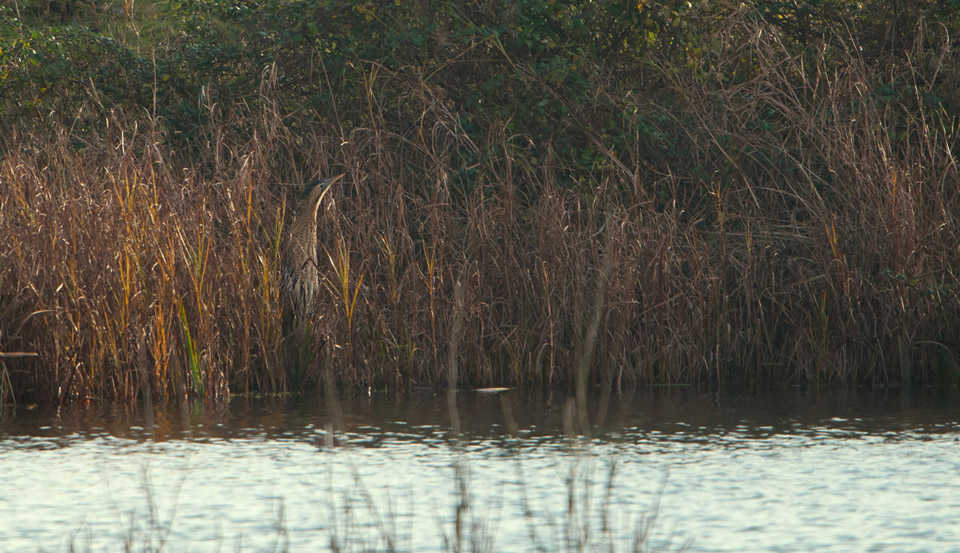 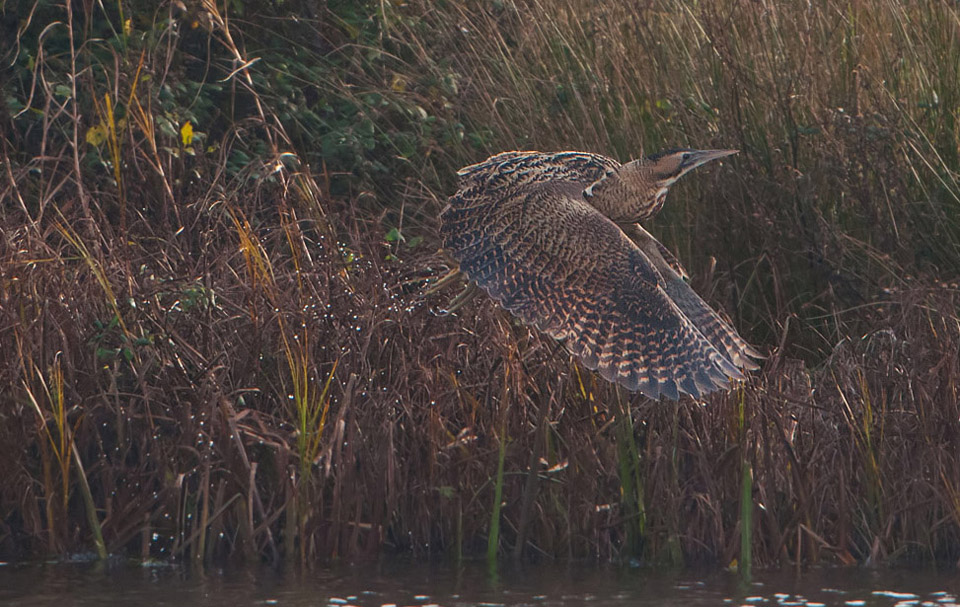 a Bittern erupts from the reeds

Although I’ve mainly concentrated on the “wow” birds, there were hundreds of wildfowl out from the hide and you will always see Marsh Harrier here, no pictures this week but that’s what keeps me coming back.

My next trip which incorporated both Dungeness and Rye Harbour with my good friend Mali were slightly unusual in that I have finally got fed up of waiting for the Nikon D300 replacement and picked up a Nikon D7100 and this was my first time using it. I’m sure now that i’ve spent some money the mythical D400 or D9300, or whatever it’s going to be called, will show up imminently. Here’s (still) hoping.

The first bird to get the D7100 treatment was a female Stonechat. Not particularly close but worth just seeing how the image would turn out now that I had the extra megapixels to play with. Not to bad although I’m never a fan of birds perched on barbed wire. It’s not going to win any prizes but I was happy with the detail when zoomed in when viewed on the camera. 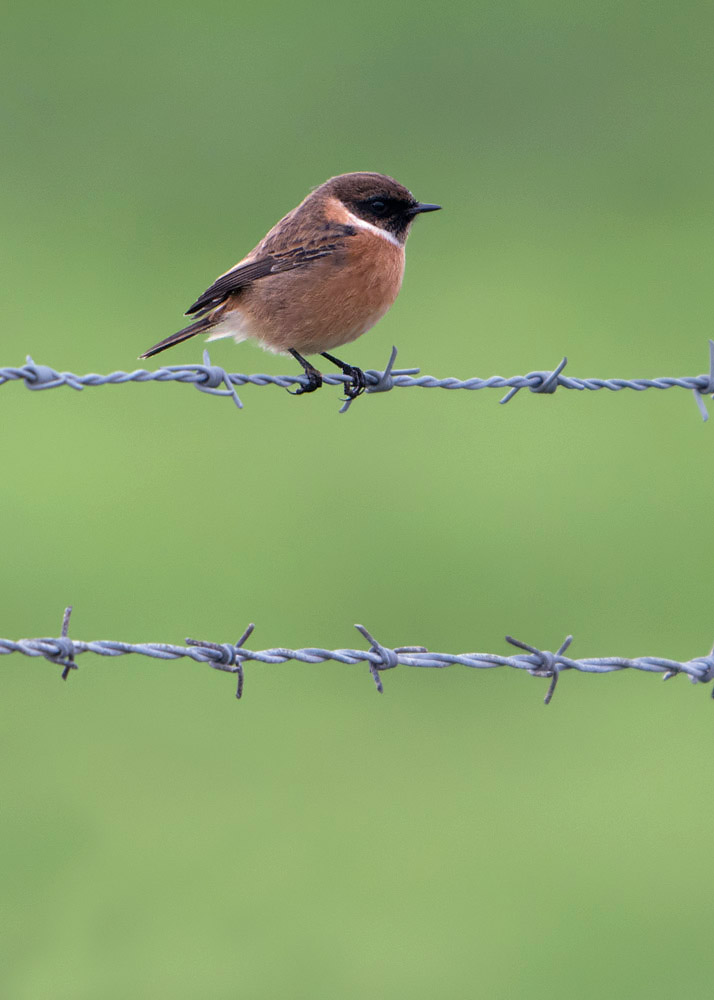 The next opportunity wasn’t so well taken but we found Coots fishing close in to one of the hides and, despite underexposing and having to lighten it up a bit (so introducing more noise than the 800 ISO that i was using) it was good to see plenty of detail available despite the very large crop here – 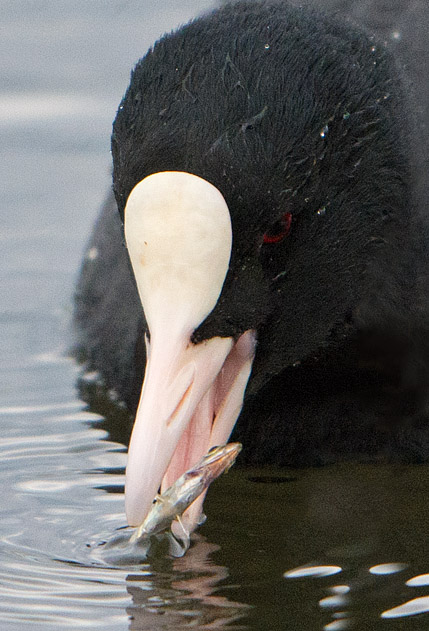 The stars of Dungeness were in no doubt. I had chosen Dungie as I knew there had been a few Great White Egret around and, as it’s a bird I had not yet photographed, I wanted to try to get a few shots. I have seen them here in the past but more often that not, they are over the far side of the lake out from the Dengemarsh hide. This time though they were very visible. I say they as there must have been either 4 or 5 birds on the reserve. At one point I could see 3 in my field of view alone. I wonder if these are soon going to be as “common” to see as Little Egrets? 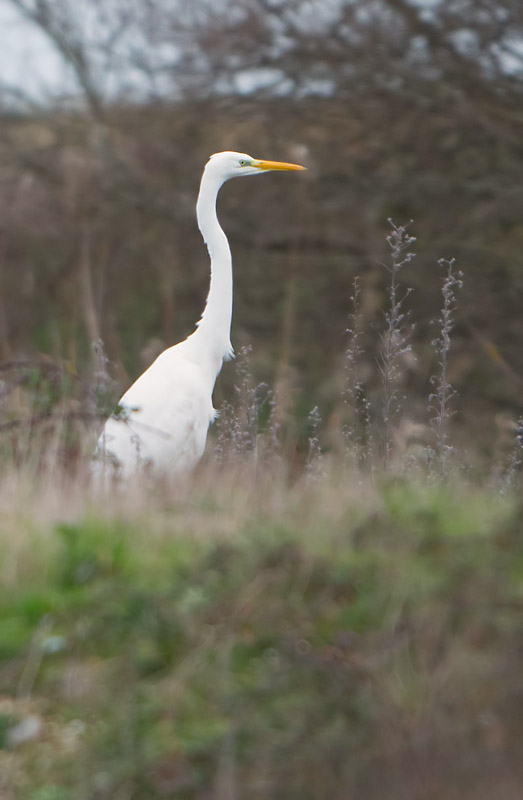 At the hide closest (before?) the visitor centre Mali pointed out a viewpoint and from here I could see two Great White Egrets. When they then started flying towards us it was all eyes to the camera to see if we could capture a decent flight shot. The sun was in and out behind the clouds and, as is tradition, I blew the highlights on many of the images. Even with my experience I still find this challenging. This one however, was properly exposed  – 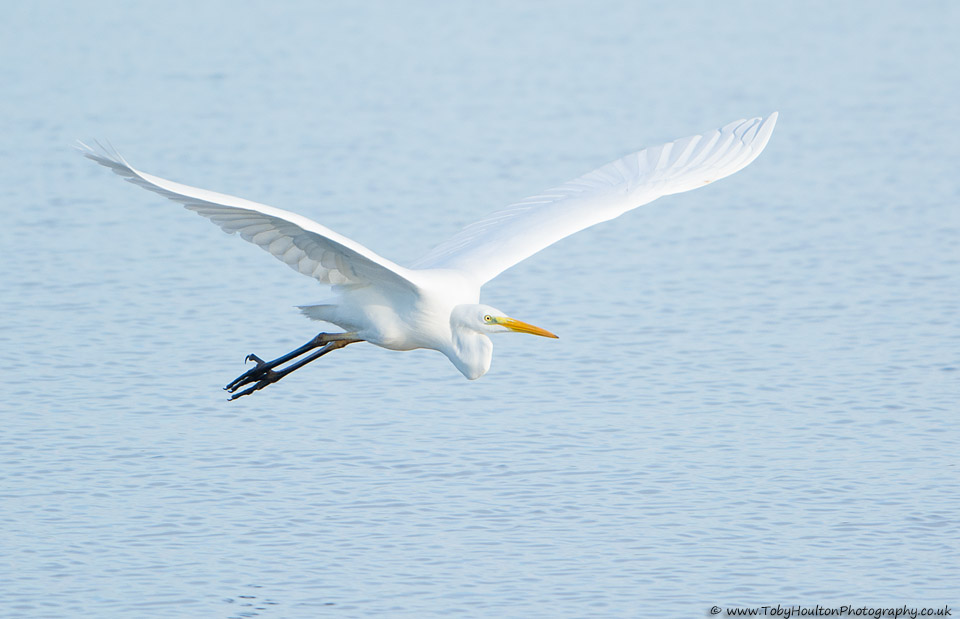 The final shot of the Egrets that I’ll post today I’ll have to thank Mali for. After the birds had seemingly flown past and landed just round the corner, Mali went back into the hide to see if he could spot them. He didn’t see it but at the very moment he was in there I got the best fly past of the day – Thanks Mali! I have no idea if he did spook the bird when going into the hide but I’ll take any help I can get!

After the great views we had of these large birds (around the size of a Grey Heron) we headed back to Rye Harbour. Not the best time to attempt to see anything to be honest but of note were the number of Little Grebe around and fishing close to the hides. 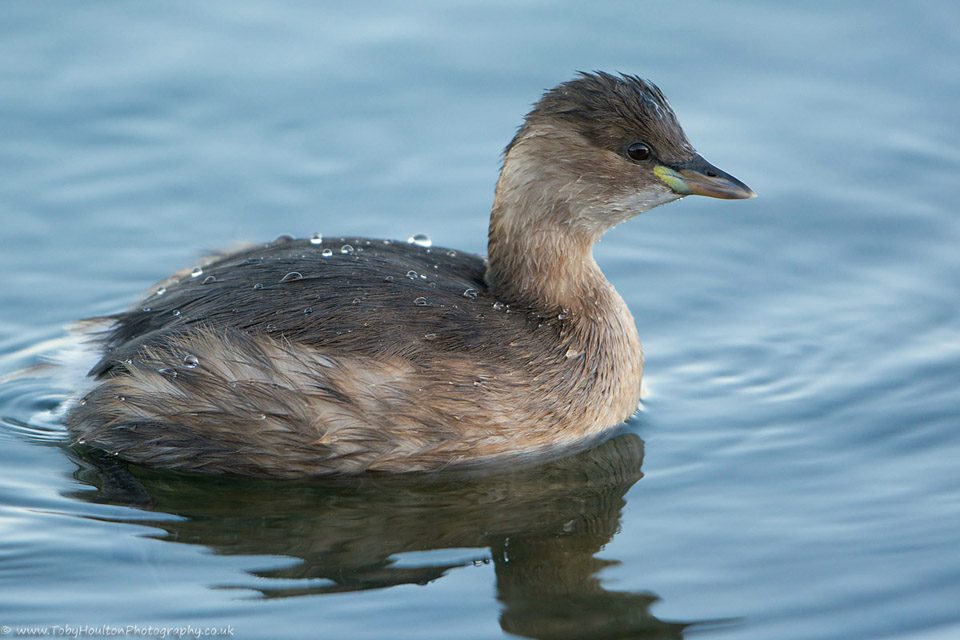 I’m writing this just a couple of days before Christmas and hoping to get out over the holiday period. Fingers crossed!