A Tale of two Foxes

Regular readers of my blog will know that my suburban garden is as much a wildlife refuge as I can make it. Deep hedges, areas of long grass and weeds for cover and insects (well that’s what I tell the wife anyway), 2 ponds and birdfeeds spread around. I also put out food for my crepuscular and noctural visitors in the form of peanuts and odd scraps. I make no apology for this, it gives the animals a small boost to start the night and allows me to watch and share in their adventures and, if lucky, a few photographs to remember those moments.

Despite the ridiculous press that urban / suburban foxes sometimes receive (I’m not saying incidents don’t happen but put it in perspective against dog attacks and the mess some of the owners leave) I have always found the local foxes to be very wary indeed. In fact my visiting badgers were much happier to ignore me and carry on than the foxes were.

Last year that somewhat changed when, on rising for an early photo session start, I saw a trio of bouncy fox cubs rolling around the garden at 4.30 am. My original blog is HERE. At the end of the article you can see the proud mum and maybe notice that white spot just visible on her front left leg. From those 3 cubs I know that one certainly didn’t survive. This year I’ve found that one of the females definitely survived.

The mum is still a regular visitor and I grabbed a snap back on the 21st March. Again see the white spot on her leg.

Female fox that visits me most nights 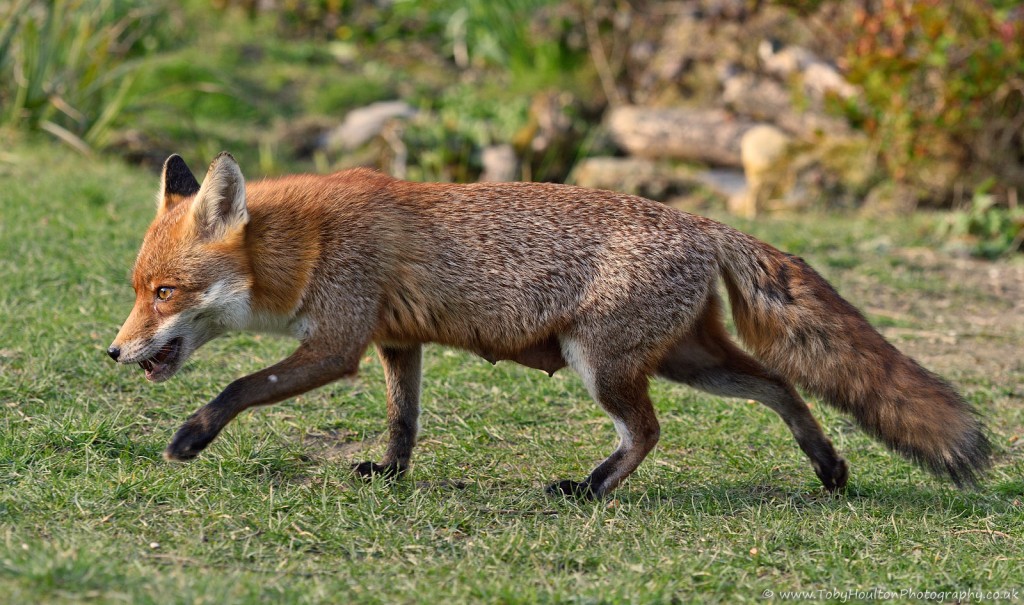 I guess I’m a sucker for a chance at more photos of cubs and made sure she had something to take them every evening. Soon she was joined by one of last year’s females and again, it was VERY obvious that there are young to feed very close by – 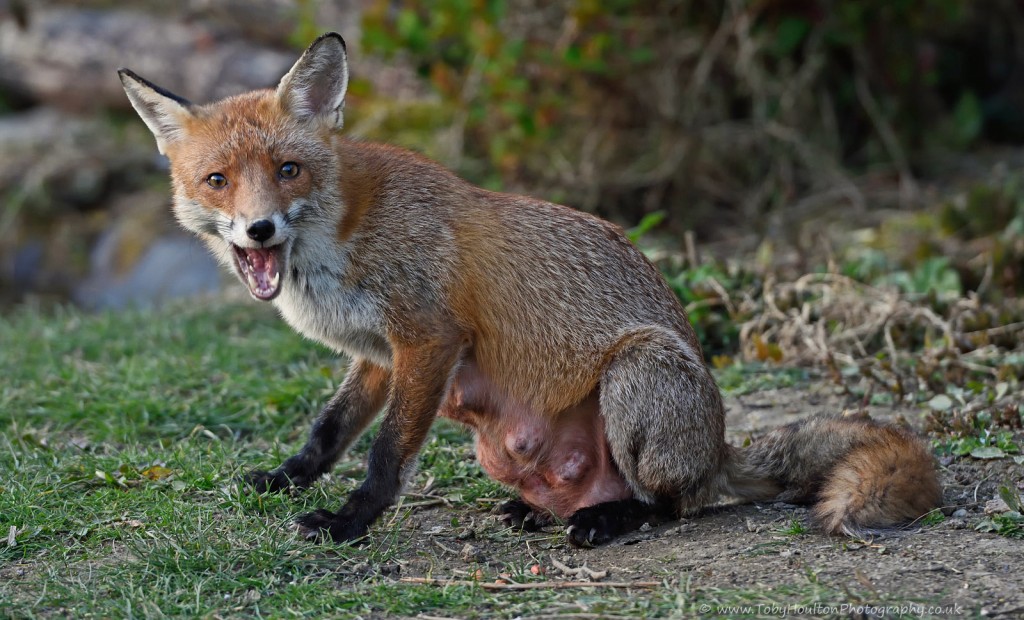 It’s been a pleasure watching these two in the evenings. They don’t often show up at the same time and I’m wondering if they were raising the same family. I’m trying to find out if the daughter could possibly come into milk to support a litter that her mother gave birth to. They both visit, collect food (sometimes stopping to eat themselves) and head off in the same direction each time. I have an inkling where they may be denned but as these are all mature gardens it’s difficult to know for sure. One thing that is clear, my immediate neighbour who has no time or care at all for wildlife has completely stripped his garden of all cover and the majority of the mature trees. Where I’m guessing the cubs played last year is now a no go area with no cover at all. I guess some people just want a tidy but lifeless garden. Shame.

The two girls have been busy back and forth each eveing and I’ve been fortunate to be able to try and get photos that normally would be out of the question. They are not bothered by the cameras at all and are happy for me to be rolling around on my conservatory floor while I attempt to get portraits or shots of them eating, drinking, scratching and..well…anything of interest…. 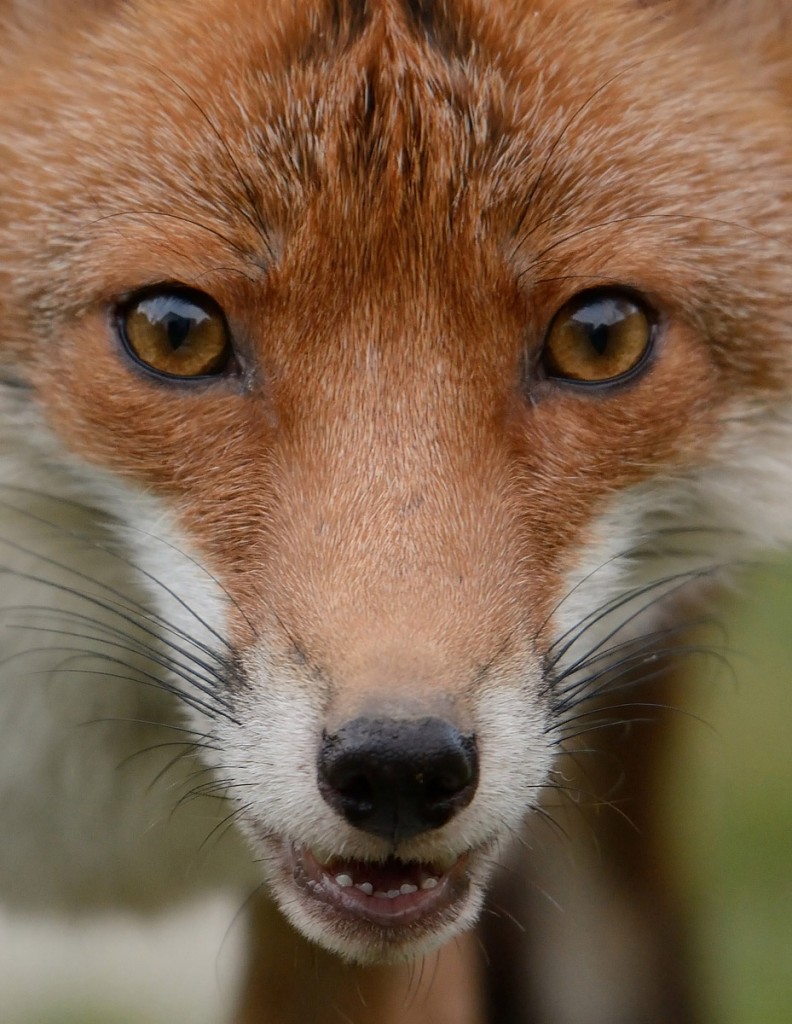 The young vixen (one year old) even comes and has a look to see where her food is. I often find her sitting on the back doorstep or curled up around 10 feet away. I should point out that i do NOT and WILL NOT hand feed even though she probably could be encouraged. I want to give her an extra chance but I don’t want her to get into trouble by approaching other humans, especially those that believe foxes are somehow a threat to them. When I touch the door handle she will back off to a sensible distance…. 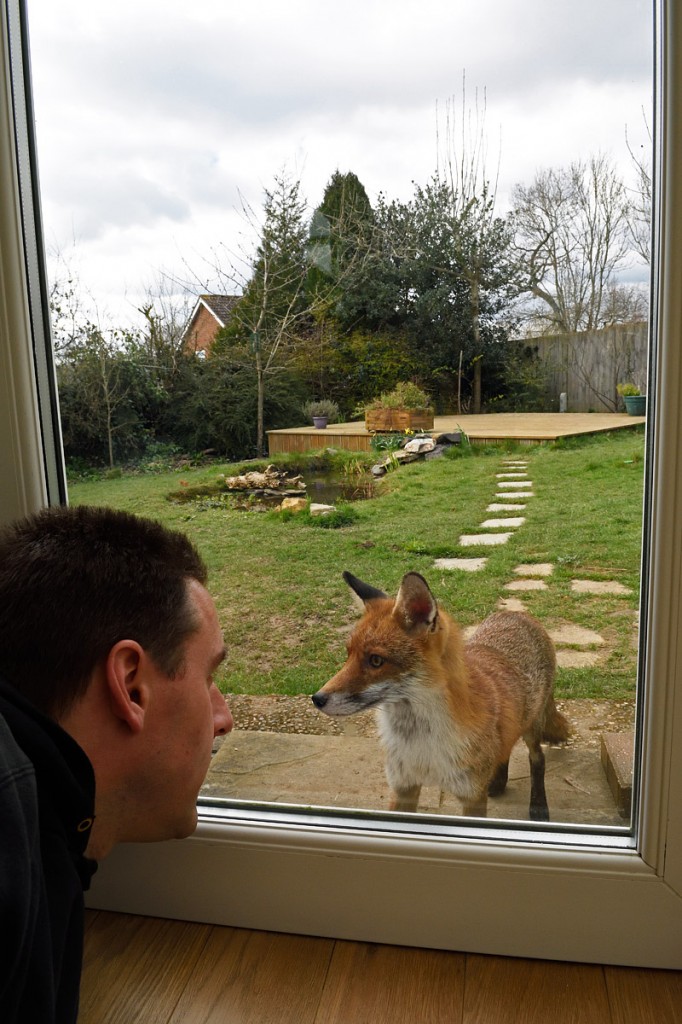 Red Fox vixen watching me through the door

So despite seeing last year’s cubs on April 28th, as I write this I have yet to see hide nor hair of this years young. I have a sneaky suspicion they are still around as food is still being taken in the right direction but both vixens are not showing much in the way of milk so I’m guessing they are weaned (at around 6 weeks old). However, not all has been happy in the fox camp. Both vixens suddenly developed limps as did a dog fox that I occasionally see. Very weird. My suspicious mind was wondering if some of my less wildlife friendly neighbours has caused this but I honestly can’t tell. I’m now thinking that maybe they have had a falling out with the badgers as the older vixen disappeared for a week to 10 days and when she re-appeared she had clearly been in a serious fight. She has lost her good looks with a serious injury above her left eye which is affecting her jaw also. She is lucky to have not lost the eye. I’m not going to post any images of this as it looks quite distressing. The good news is that she is otherwise fit and healthy, still has vision in both eyes and is capable of feeding herself and her offspring.

At the same time, the younger vixen (who we refer to as “daughter”) is not recovering. She has a really sore front paw which, when I took some photographs of it, I can see is infected. I’ll be off to the vets this week to see If I can get anything for her as it’s now been weeks with this issue.

For now I’ll leave you with a couple of images of them at their best. Fingers crossed that the cubs will be coming to our little refuge sometime soon. 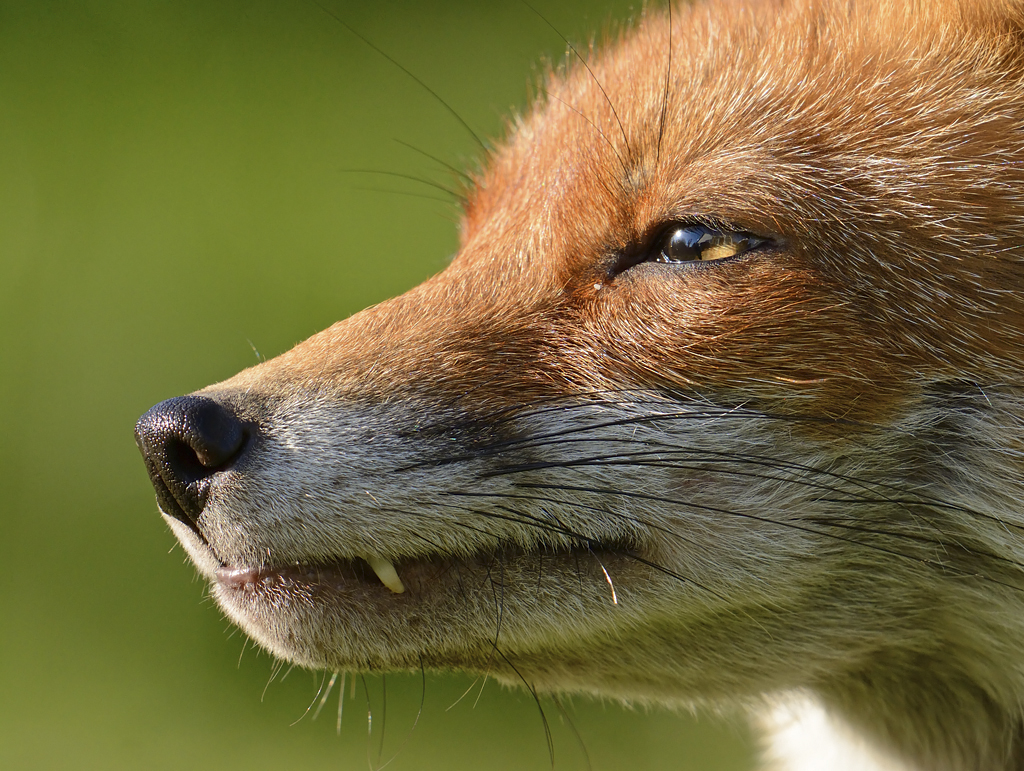 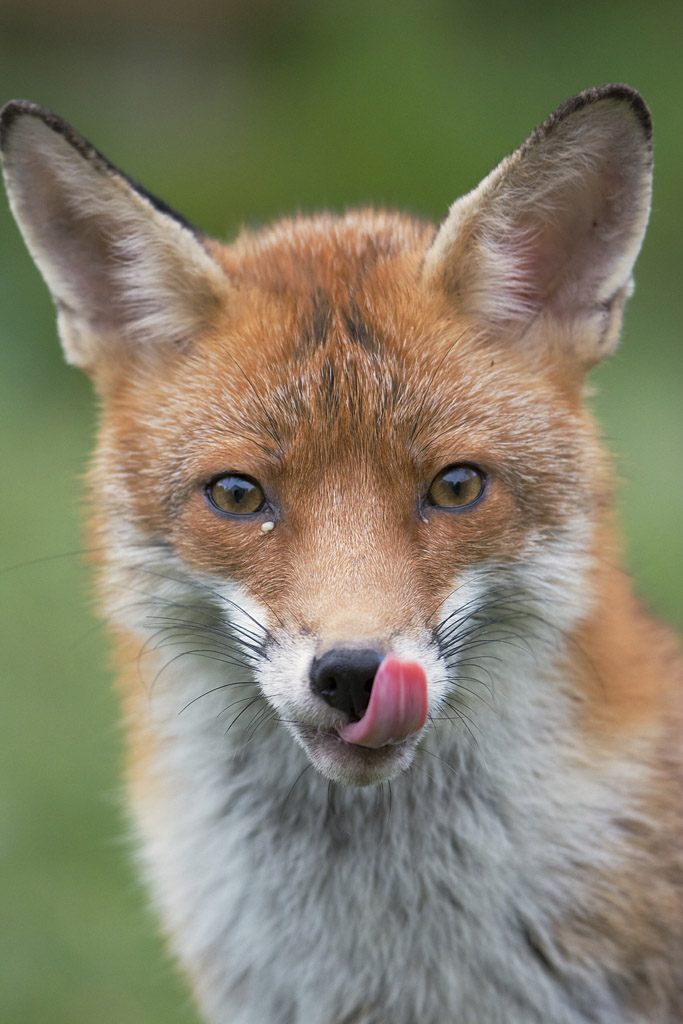 Something tasty this way comes 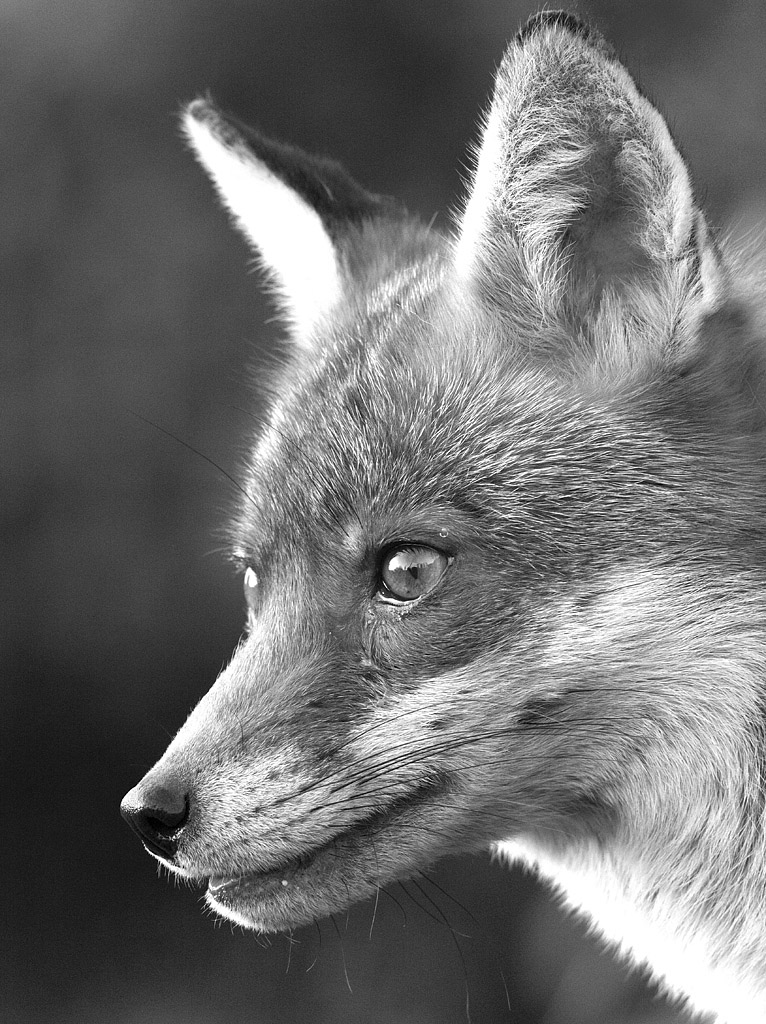 Portrait of the older vixen showing her good looks

Hope you enjoyed the images.

It’ll be no surprise to anyone that follows my blog or is familiar with my “work” that I have foxes visit the garden every night. I’ve never actually known where they den and can only assume that they are in one of the many mature gardens that surround us. I have seen young foxes before but none that I could ever describe as a cub. All that changed at the end of April.

Rising at just before 5am to go out with the camera I took the obligatory glance out of the back window and to my surprise there were 3 bouncing little fox cubs fighting and playing in the garden. I just had to wake my wife to also come and watch. it was way too dark to try and get any kind of photos so we just enjoyed the moment. Roll on a couple of evenings later and once again they were out. it was almost dusk with little light but I managed to get a couple of shots – 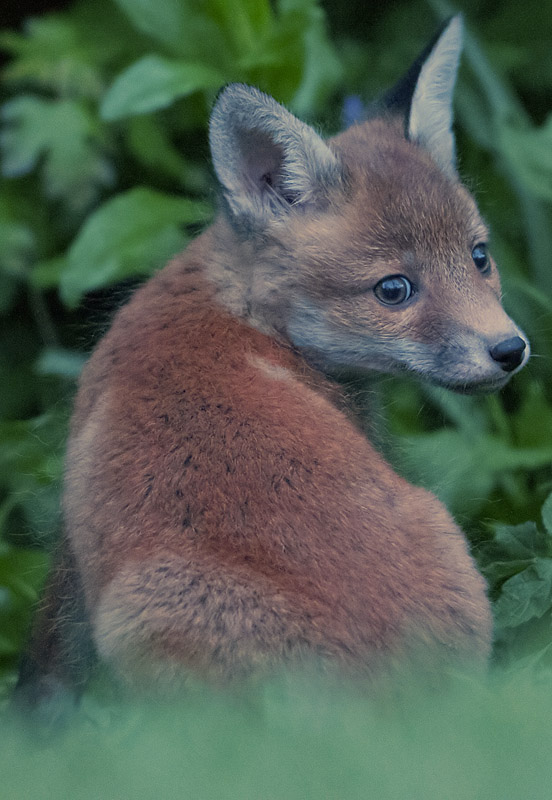 Considering how low the light was I was lucky to get anything at all, they barely stop moving and as I hadn’t planned ahead and got my flash units in place I was restricted to very slow shutter images and high ISO. The image above is 1/25s at F4 and ISO 3200, not bad for a D300. 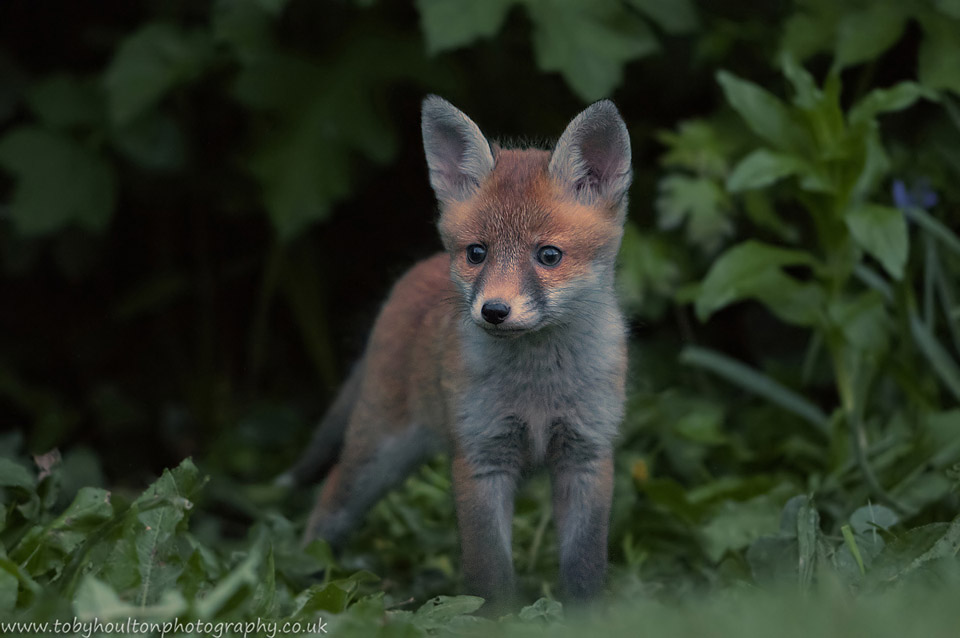 You can clearly see how young these are and I’d estimate around 5 weeks old based on information i’ve since looked up online. I would also assume that as they won’t stray too far from the safety of the den at this age that they are denned just through our dense hedge in the neighbours garden. Such an opportunity just can’t be passed up so over the next couple of nights I spent hours laid out on my conservatory floor with the lens pointing out of the door to try and capture some of their antics.

For those interested in the technical info behind the shots – the following are taken with a Nikon D300 with a 70-200 f2.8 VRII lens and a 1.4 converter and are lit by two SB600 flashes triggered remotely by Pocket Wizard Plus X units. 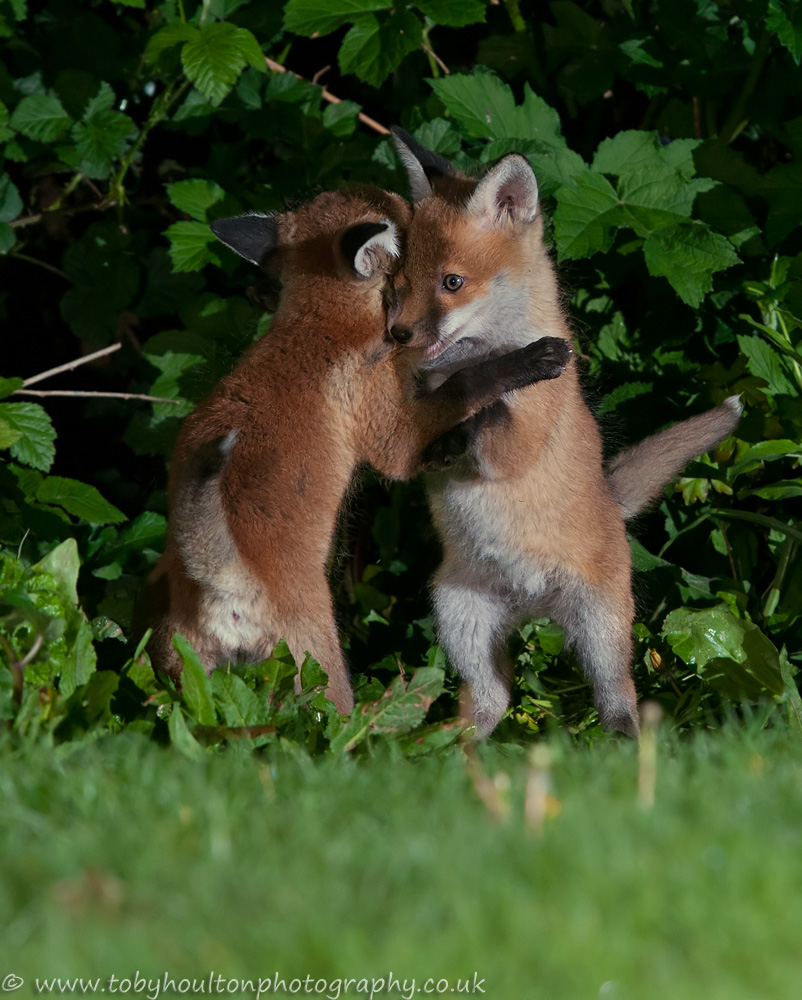 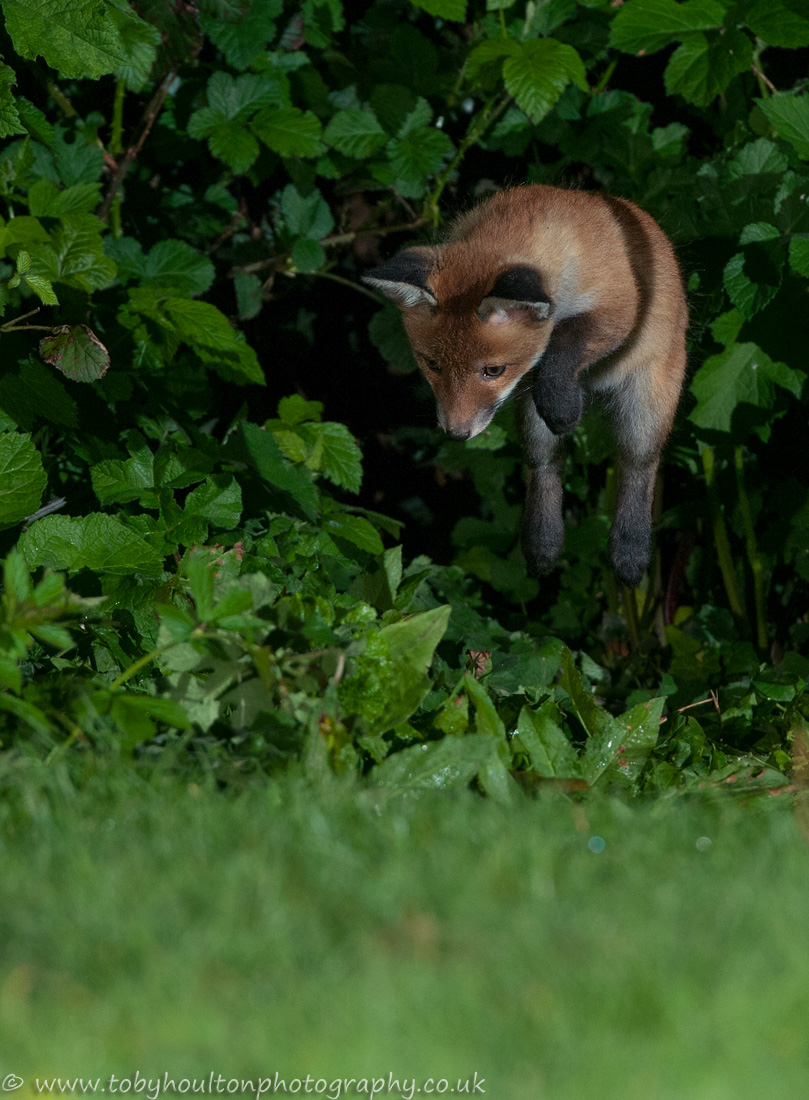 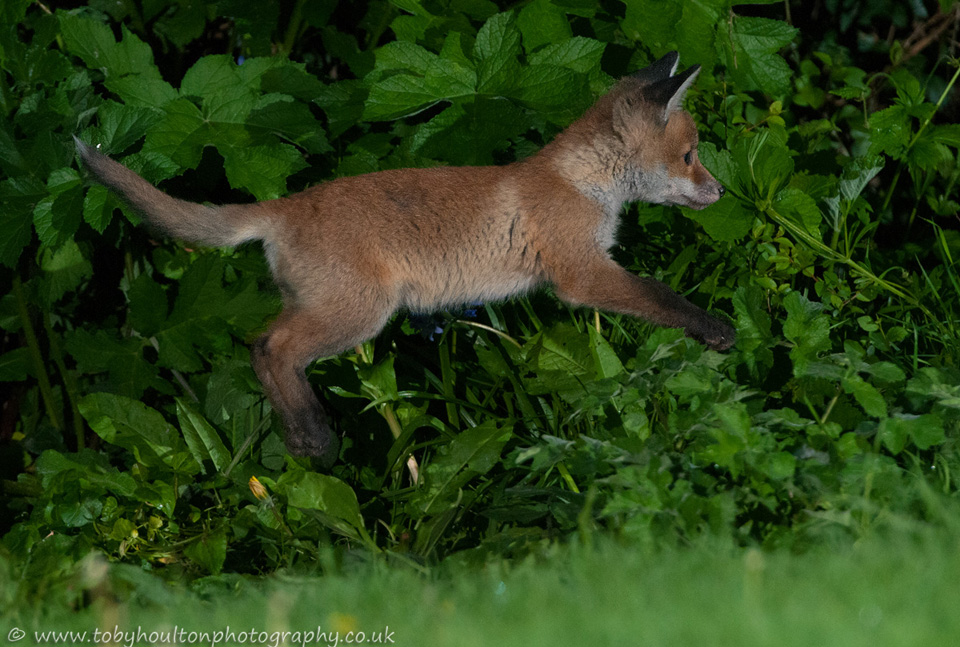 It was difficult to stop myself giggling at their antics and at times I couldn’t believe I was watching this from the comfort of my own home! 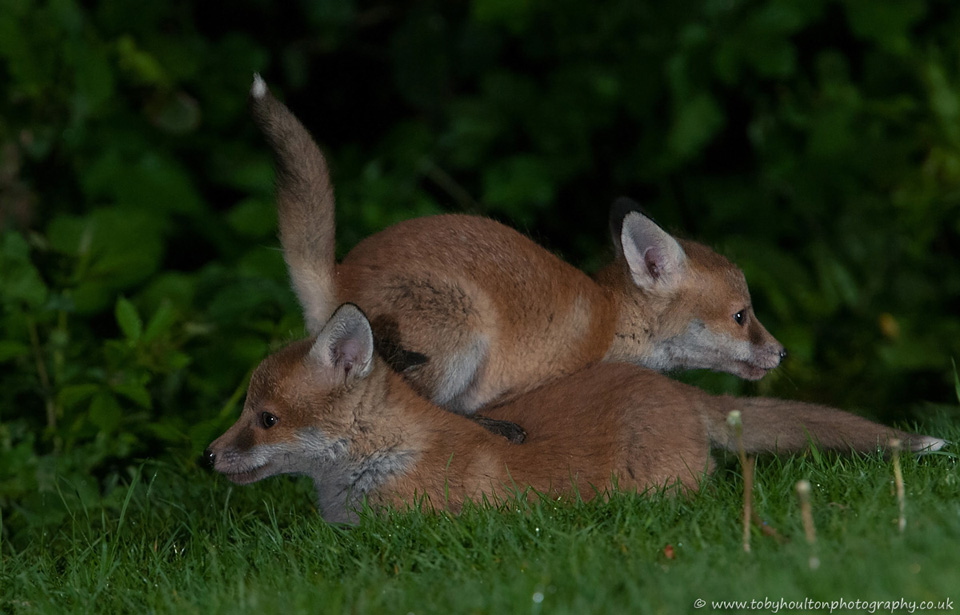 Fox cubs having a bundle 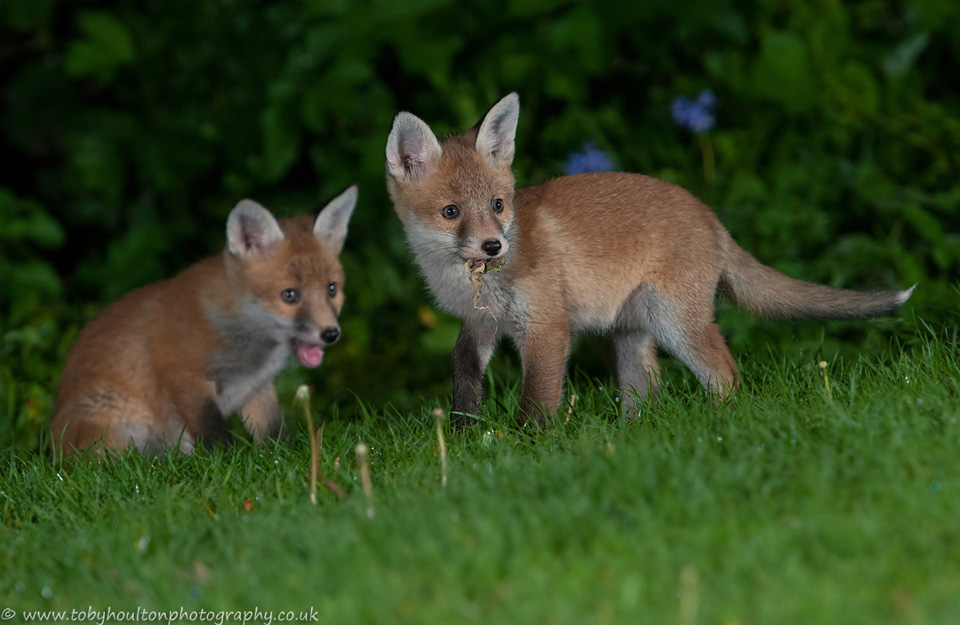 Having such a privileged view of the goings on let me see scenarios and situations that I’ve never seen before. Firstly was the cubs obsession with the blanket weed that I had removed from my pond. I pile this up next to the pond to let any insects that happen to be caught in the weed a chance to get back in the pond (although I’m very careful when removing it). Weirdly the cubs loved this stuff and I’d find it strewn around the garden in the morning. On this night I saw that at times they would actually eat it too.

More worringly I wondered what would happen when the envitable meet up with my other regular nightly visitors, the badgers, occurred. I have twice witnessed the vixen chasing the badgers off away from the cubs (after hearing noise from indoors, not while getting images) and it reaffirms the danger that mothers will risk to protect their young. It wouldn’t be good news for the fox if the badger stood its ground and fought back. This scenario will be playing out across the country as it’s not unusual for foxes to actually den within an area of the badgers sett.

The youngsters certainly knew to keep their distance – 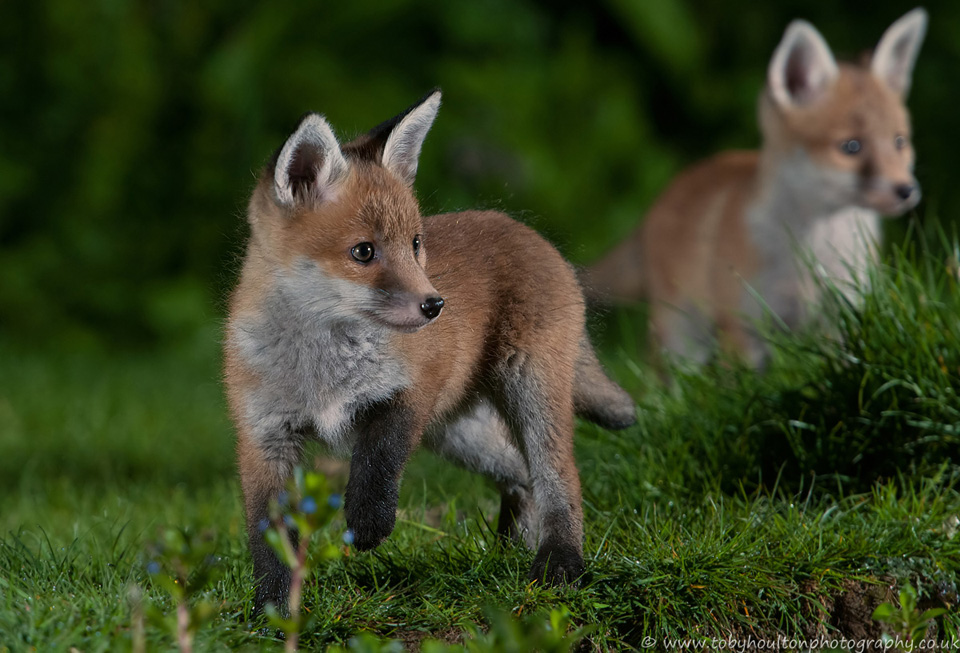 Fox cubs have spotted a badger 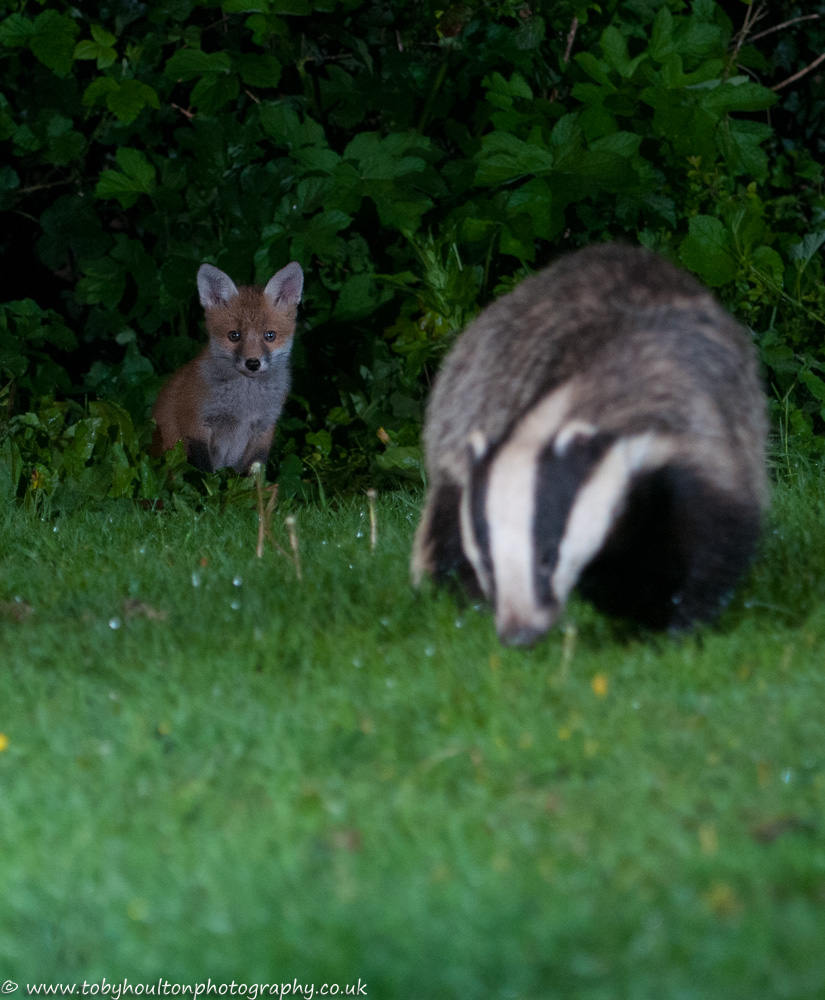 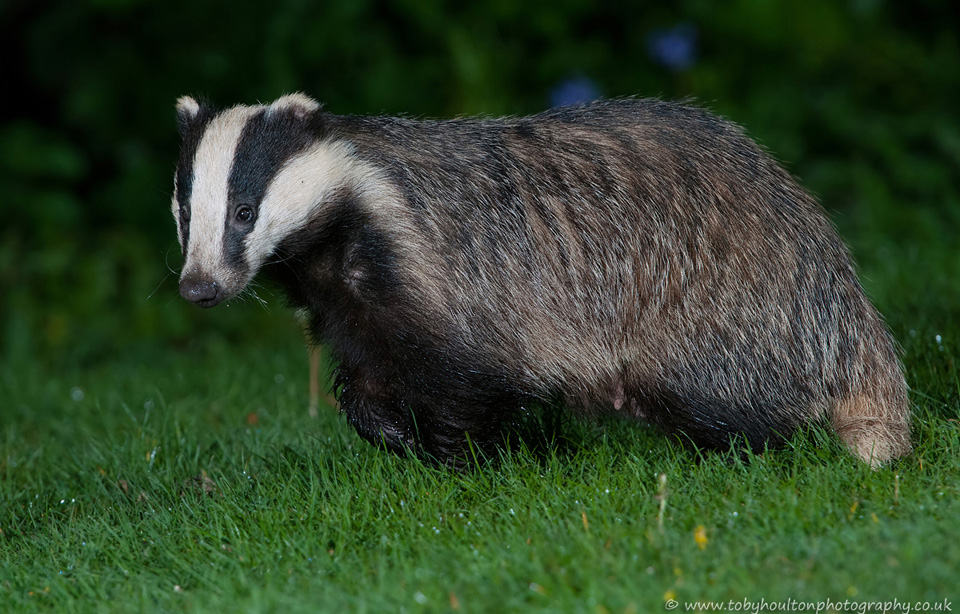 Occasionally I was also lucky enough to spot the cubs in the garden in the middle of the day which triggered a mad scramble for the camera and a stealthy creep to the conservatory door and wincing as I opened the door and it squeaked. I needn’t have worried as the cubs were quite oblivious to my presence and more more interested in soaking up the sun. 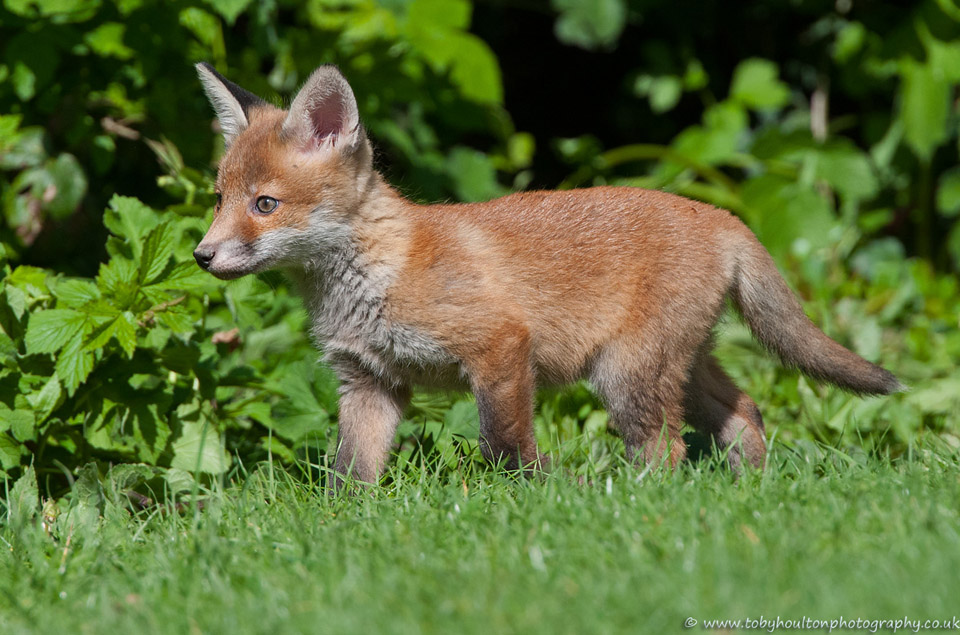 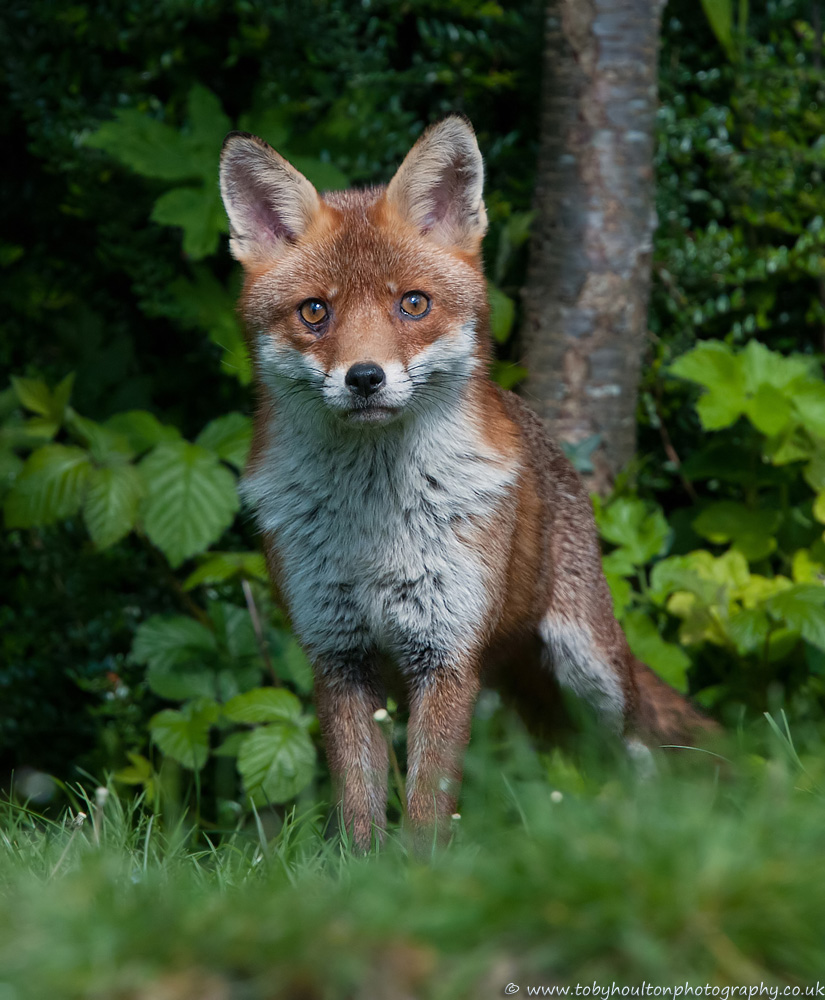 You’d be forgiven for thinking I’ve been doing nothing else but photographing the cubs and that’s not too far from the truth. I have been out elsewhere and have added new images to the latest images gallery. Hope you’ve enjoyed the images as much as I’ve enjoyed taking them!