I was sat right at the water’s edge of Loch Fleet, the smell of the sea, beautiful crystal clear water, flocks of Sanderling and Dunlin whirling around the mouth to the sea and the ever present call of Oystercatchers, when it really hit me. I live here now, this is my local area. As I’m thinking this in a slight state of disbelief, a Common Seal surfaces in front of me and i’m treated to a flypast by Red Breasted Mergansers and Goldeneyes. 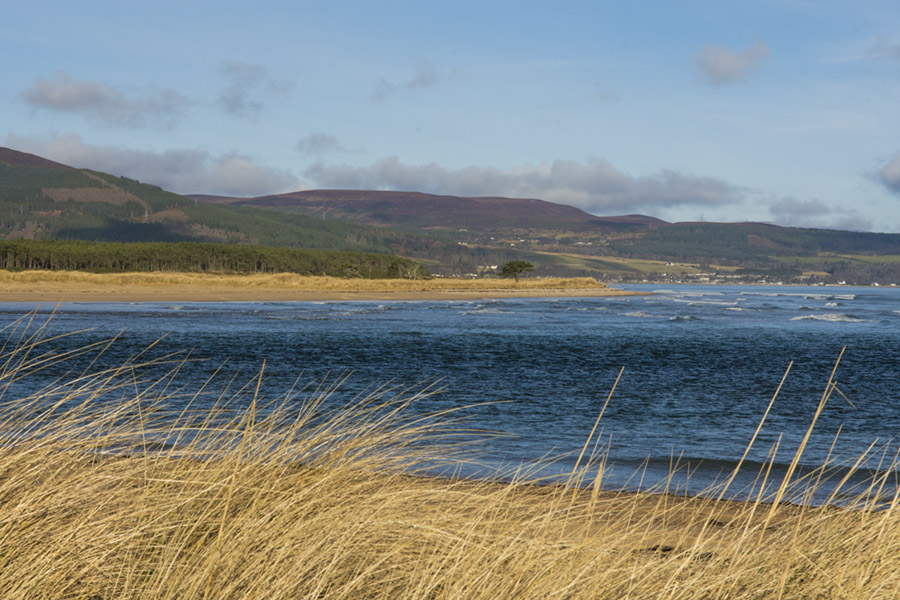 I guess I should go back a bit and explain. My wife Maria and I have been talking about moving away from the south east of England for some time. For us, just too many people, too much traffic, not enough space, so I started looking at jobs in Scotland. The logisitics of what would be required were pretty daunting to be honest but we were determined to make a significant change. Then whilst at work I was given an idea. I didn’t know If it could possibly happen but at worst the answer would be no. Why couldn’t I keep my existing (IT based) job and work from home in another location. A plan was hatched and I started asking questions to see if it was possible. When I get the initial nod from my line manager I’m starting to think this could be possible. A few weeks later when I’m sat with my senior managers explaining the pros and cons and how my plan would work I was given the go ahead and I realised our lives are about to significantly change.

Fast forward a few months, we’ve sold our house and are yet to find anywhere in Scotland to live. We are living with family and all our possessions are in storage. We spent the summer up and down to Inverness and looking at properties in a wide area around the Cairngorms and all the way to the west coast. The main requirements being quiet and secluded with space and wildlife (especially for photography!), decent internet connection and within a couple of hours of an airport. I’m a creature of habit and this really did turn our lives upside down. Moving is stressful enough without actually wondering if you’ll ever find a property. One we did find one we ended up not being in a position to make an offer and lost it.

During this time family, friends and work colleagues were really supportive (for which I am really grateful). It was an emotional rollercoaster to say the least.

I remember people saying “things happen for a reason” and I feel now that we are settled in the Northern Highlands that really feels true for us. Whilst the house we lost felt like a disaster at the time, we really did find the right place in the end. Nestled in a very quiet secluded location on a single track road but only 3 miles or so from town (Tain) with everything we could want locally. A trip to Inverness (heading south!) is a 45 minute drive. Perfect.

So, as this is a wildlife blog, what’s it like? A quick explanation of the area. Single track road for a few miles with lots of “wet” woodland to either side. Down a small private road, our property borders a farm field (low scrub, heather and young pines) on one side, croft land on another with lots of mature pine trees. We have a couple of neighbours with large mature gardens similar to ours – mature pines, some low scrubby bushes and hedges. We have a large area of grass front and back and a large pond at the back which seems “natural” (unlined) as the ground in lower areas is quite boggy. 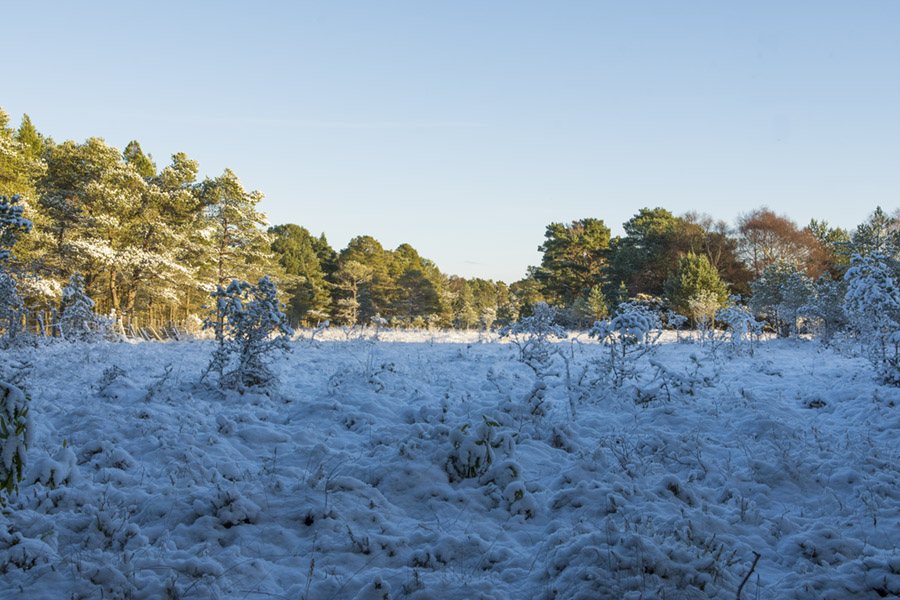 Well we were hoping for Red Squirrel (and were told they had been seen here) but this is looking unlikely despite being plenty of pine forest very close. I’m told there are Pine Marten around although I’ve not yet caught any on the camera trap. There are deer which are mainly seen on the croft / farm side of the fences, mainly Roe but I have seen a young Sika also.

If you are one of those that “follows” me you’ll be aware I do like to encourage as much as I can into the garden to be able to watch and photograph. I almost have a blank canvas so really putting some planning into what to plant to encourage the most wildlife.

So who are the stars so far? I’ll let the images talk – 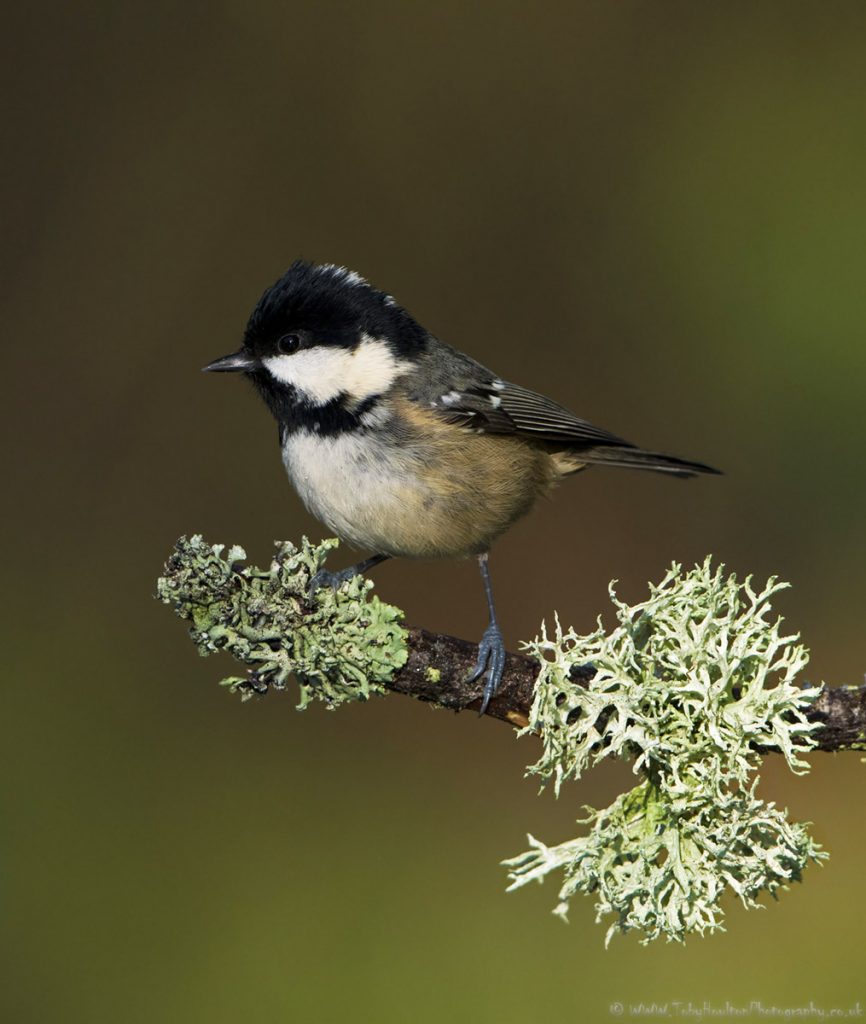 Constant traffic from these little birds, almost fearless, will come right up to you. 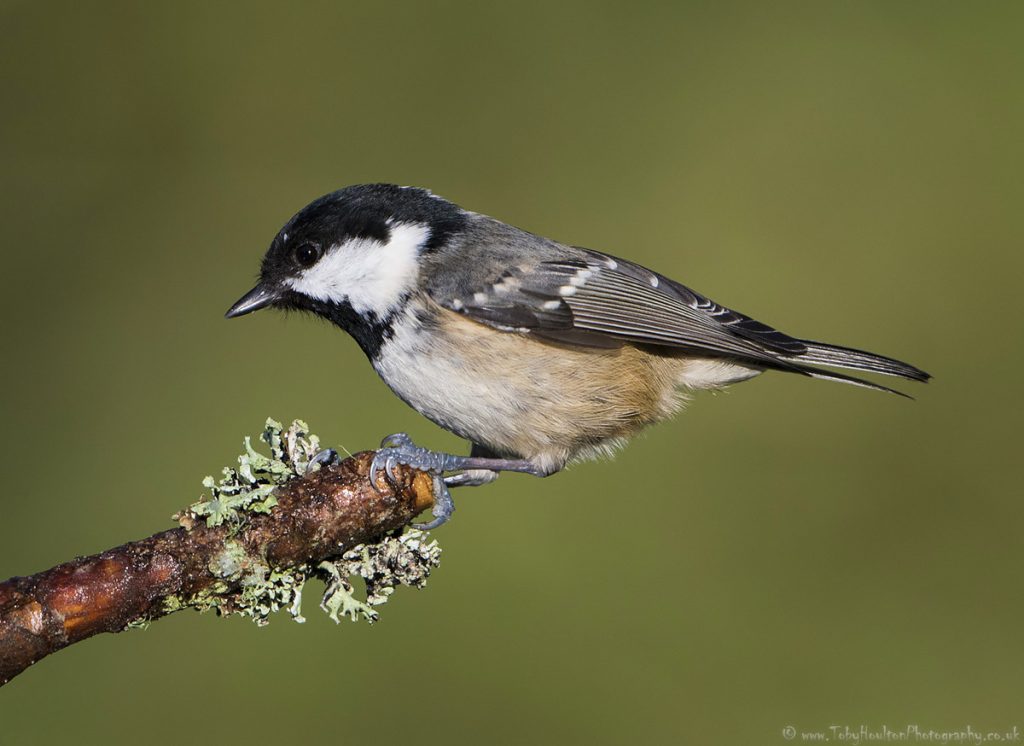 The mouse like Treecreeper is always present. This really is a bonus, thinking of some interesting ways to photograph them in the future. This one found a juicy morsel underneath the pine bark despite the freezing conditions. 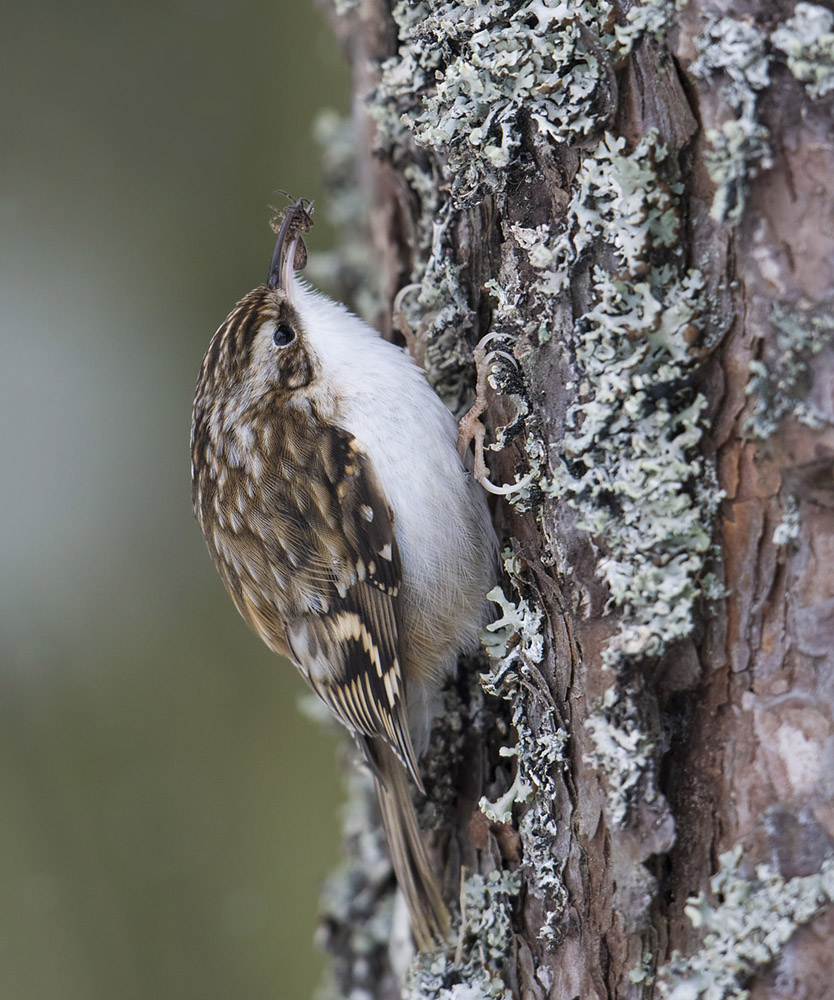 Another bird that is here in high numbers are the Chaffinch, large flocks visit the feeders are and ever present flitting through the branches. A large flock of around 40 birds present during the snow, feeding on what i had put out to help all through the harsh weather. 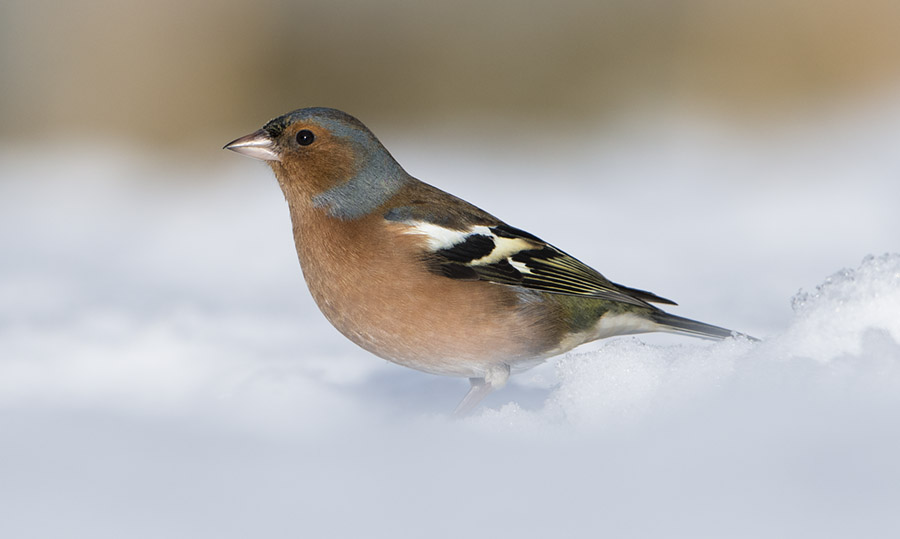 One of my (if not one of the nation’s) favourites that visit a few times a day in a small flock is the Long tailed Tit. Such beautiful little birds. Stand still when you hear them and you may be rewarded with extremely close views. 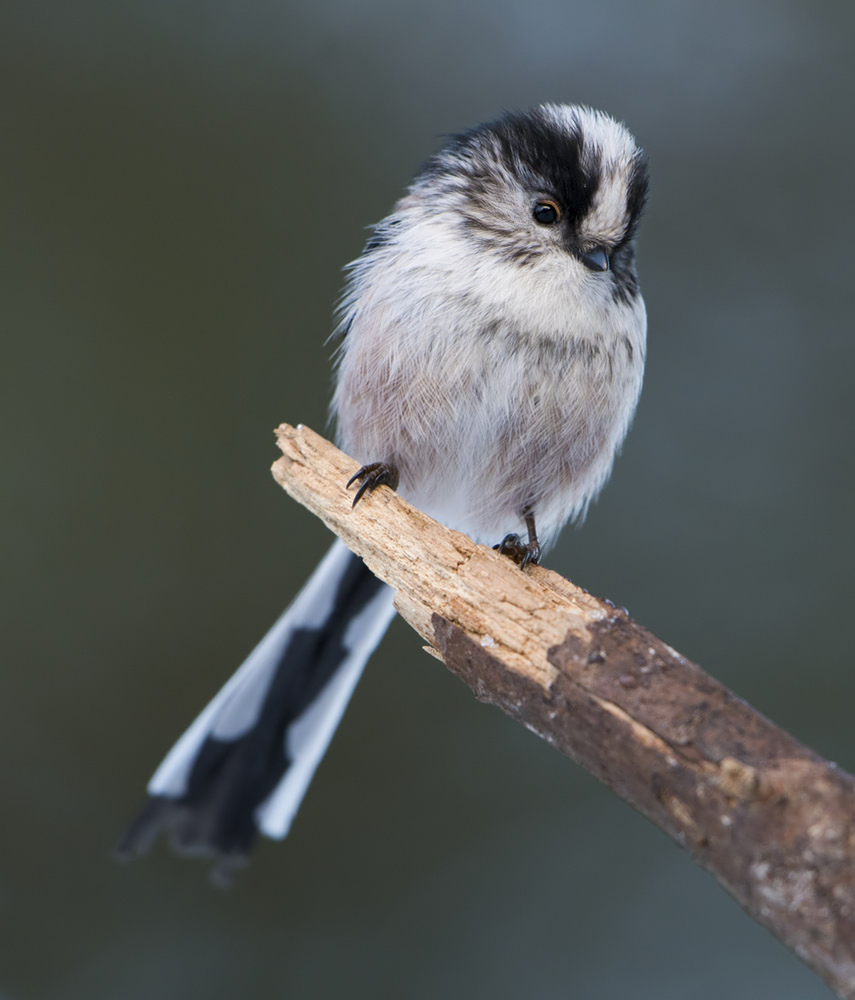 There are of course all the usual garden culprits, lots of Blackbirds, Robins, A few House Sparrows, Starlings and Dunnocks, along with Great Spotted Woodpecker, Great and Blue Tits, Hooded Crow (probably my only real Scottish visitor so far  – and no images yet), the inevitable Wood Pigs (my new name for Wood Pigeons).

It took a larger niger seed feeder to encourage the Siskins down and I am pleased to say they are here everyday at the moment. Feisty little birds with an ego much bigger than they are… 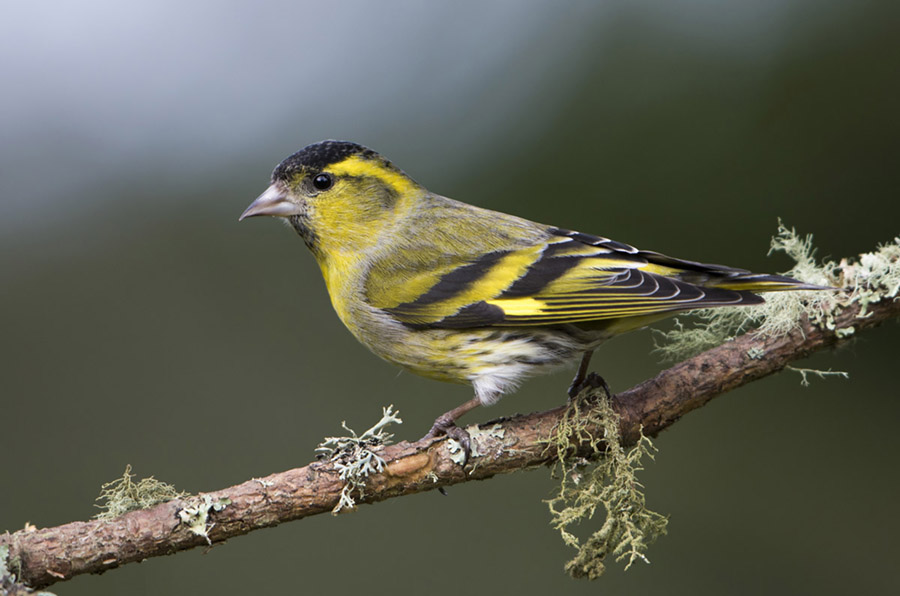 Here’s a bird I never thought I’d be photographing in my garden.. 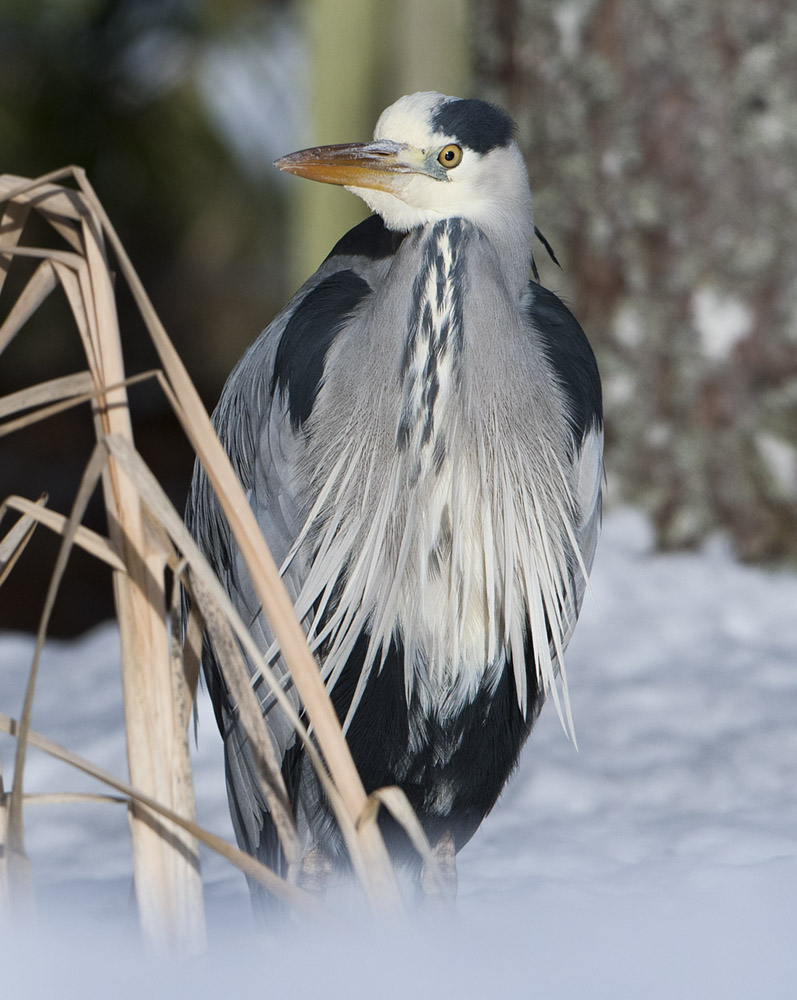 The wintry weather also brought in a few very welcome visitors. I took a half day off to see If I could get any images of the redwings that I had seen the previous day although it had been a fleeting visit. Really pleased I did, I was treated to a very memorable session with the birds sometimes almost too close to focus on. They were there for the apples I put out through the winter.

To get images like these I lay flat on the snow, cover my body with a bag hide, wear a balaclava and make sure I make no sudden movements. Not always needed of course but what better way to photograph your subject when it doesn’t even know you are there? 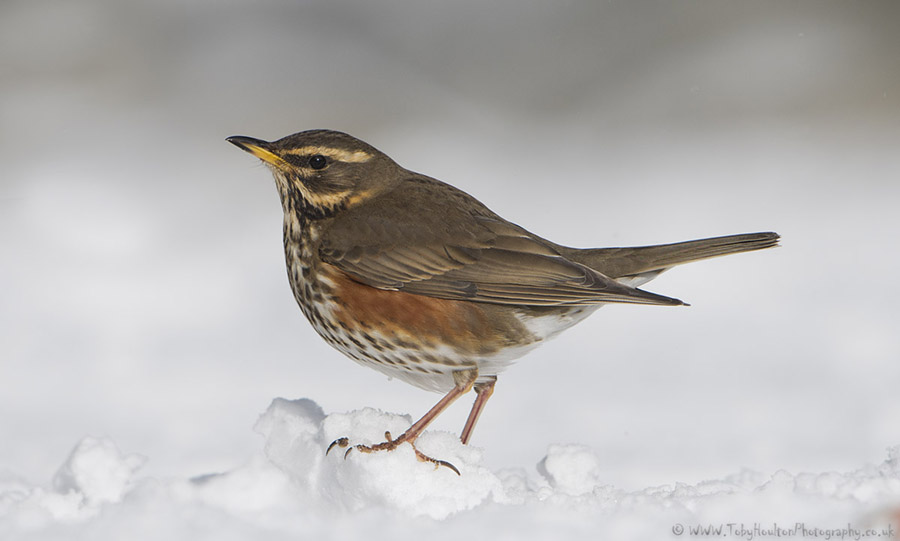 I was honoured to have this chosen as image of the week on Birdguides website. 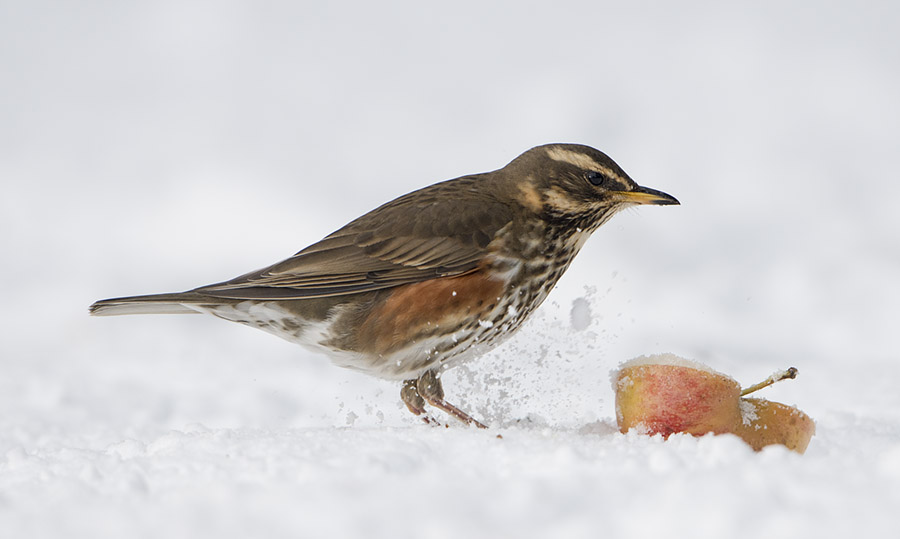 Redwing with apple in snow

Another bird I hear regulary (but have not yet seen) is the Tawny Owl. Every evening we are treated to a chorus of calls from the nearby woodlands. Looking forward to seeing If I can encourage them to the garden. I have a great spot for an Owl box so will put one up to hopefully attract a nesting pair next year.

It’s now April and I’m reliably informed that spring is late this year. Other than the skeins of geese that regularly flew over, the only migrating bird i’ve spotted from the garden was a fantastic Osprey. Not a bad sight when you are sat at your desk working! I’m really looking forward to seeing which migrants will be joining the regular garden birds. I’m hoping for Spotted Flycatcher and Redstart but only time will tell.

Apart from the migrants I am seeing lots of nesting activity. There are Blue Tits in box the boxes I made and put up (i’m not that “handy” so was fairly pleased with how they turned out), Coal Tits nesting in the wall of the house (there was a decent hole where a pipe previously was which I meant to investigate and fill up – oh well that can wait until the end of the season now) along with House Sparrows and Starlings under the tiles near the chimney. 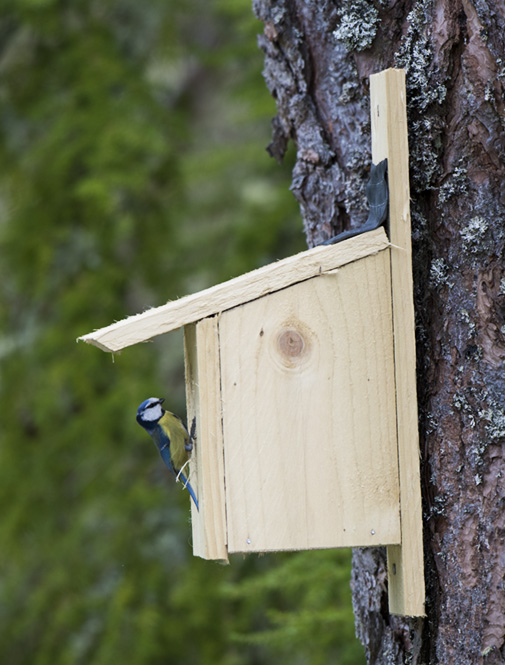 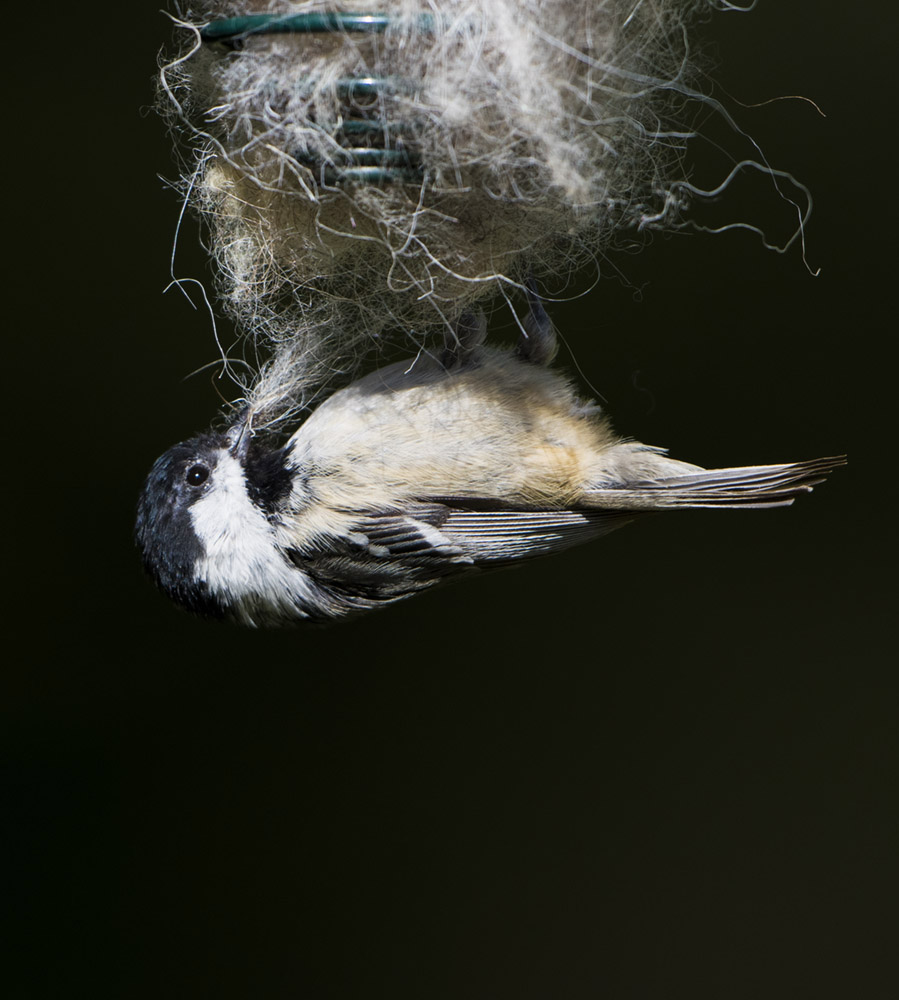 We are starting to feel like we are settling in and it really does take some getting used to. 5 months in and we are still getting moments of “I can’t believe I live here!” We have so many places to explore (Cairngorms, loads of coastline, lots of uplands, woodlands, Channonry Point for dolphins) I can only guess at what I might be lucky enough to see. I’ll be sure to update you when i’ve visited some of these places and have some images to share. I’ve also not yet met many photographers but guessing as the summer season starts I might see a few more lenses out and about.

I started by mentioning Loch Fleet and I guess that’s a good place to end as well. This is fast becoming my new “local” spot and I’ll be concentrating on this area in my next blog update.