It’s been a dream of mine to visit this area on the west coast of Scotland and this year I finally organised a week in Ardnamurchan followed by a week in Northumberland. I have been up to the Isle of Mull before but flew, and the restrictive nature of flying on the gear I can take saw us agreeing to drive all the way. I live on the south coast (Hastings) so it’s a pretty long trip so an overnight stay was organised for Gretna Green to break the journey.

Leaving Gretna we had a relaxing drive as we skirted Glasgow, then through stunning scenery around Loch Lomond and through Glen Coe, finally arriving at the car ferry at Corran for the short hop across the water. Once across the water we followed the road to Salen (and grabbed some food shopping) and on to where we would be staying for the week. The drive along single track roads (quite safe with passing places) and the amazing scenery was a sign of things to come. With pristine woodland, mountains and lochside I could quickly see this was a nature lovers paradise. Another 30 minutes drive from Salen to just before Ardslignish saw us arrive at our accommodation at Lochside Follies.

There’s always a moment just as you arrive when you hope that where you’ve chosen lives up to your expectations and wow, did it! 4 unique self catering properties, along with the owners house dot the hillside in some of the most beautiful scenery you could hope for. We had chosen “The Folly” which sits alongside a byrne at the bottom of a wooded slope and faces Loch Sunart and the far hills. In front were well kept gardens, then the (very quiet road), across which was a large area of ferns, low trees and marshy areas through which well cut paths led to the water’s edge of the loch. 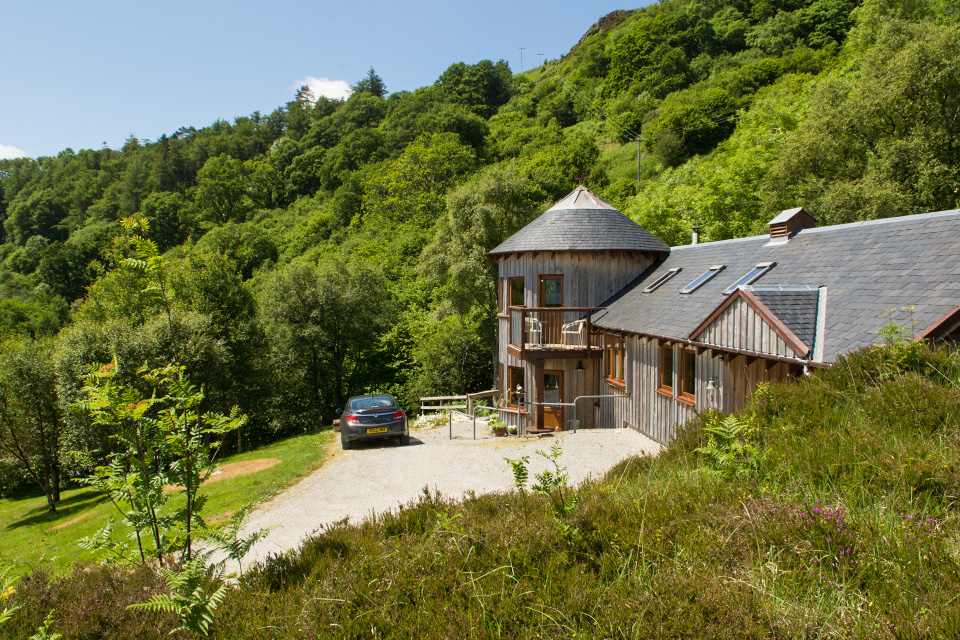 There is a steep walk up behind the Folly – this is the view, well worth it… You can just make out the Ruin (another choice of accommodation but don’t let the name put you off!) towards the bottom of the image. 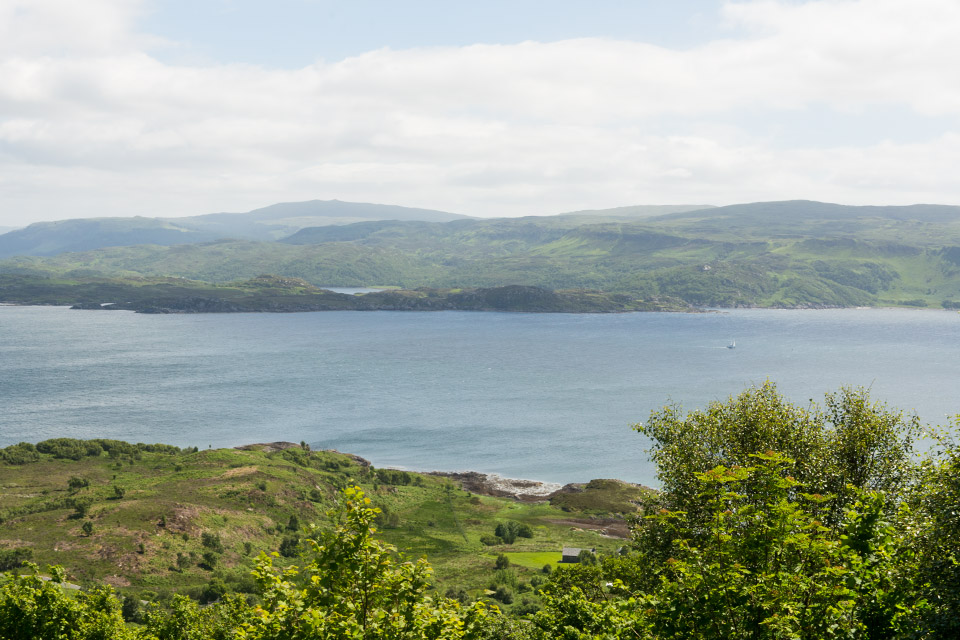 The great thing about this location was the very friendly welcome and that we were free to wander anywhere on the extensive grounds. I’d already checked it was ok to put up camera traps and a hide just in case I wanted to use them.

Wildlife photography was the main reason for visiting and I was really encouraged by reports of Pine Marten in the visitors book. Our first walk down to the shore line (all within the grounds of the property) revealed Common Seals lounging in the bay just offshore and a shoreline that we were told holds Otters. We also spotted Red Deer just outside the perimeter. Birds were calling from all around, some I was very familiar with such as Whitethroat, Yellowhammer, Chaffinch, Pipits and Song Thrush and others took a little investigation to find out what they were, such as Siskins and Redpolls. After a long day there was just time to set up the camera trap and bait an area with peanuts and peanut butter to see what might be tempted during the night.

I couldn’t help but get up early and wander with the camera. I walked slowly down to the shore line listening to the birds and watching for larger animals. I walked quietly along the shore line and onto one of the small peninsulas just in time to see an otter heading inshore with it’s catch and so hastily grabbed a few shots – 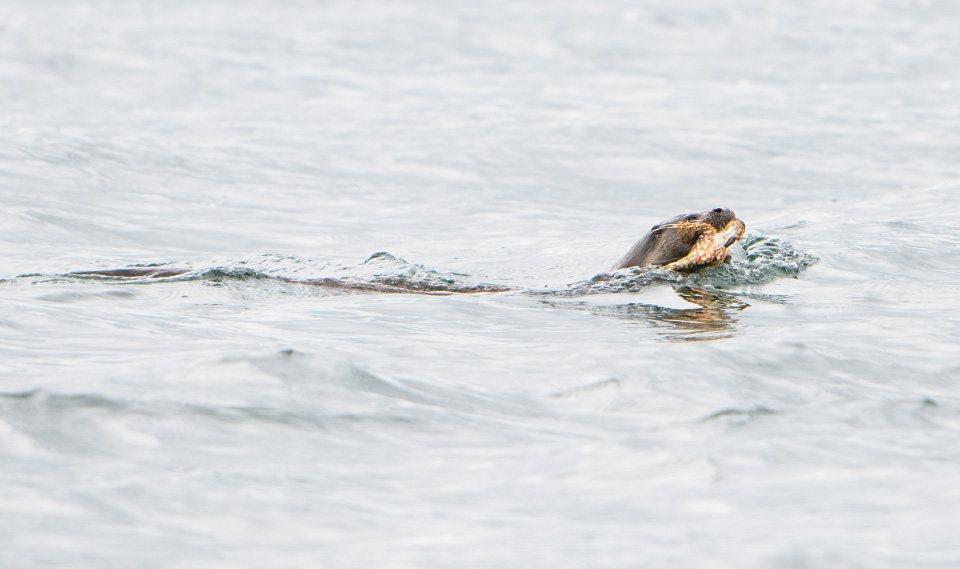 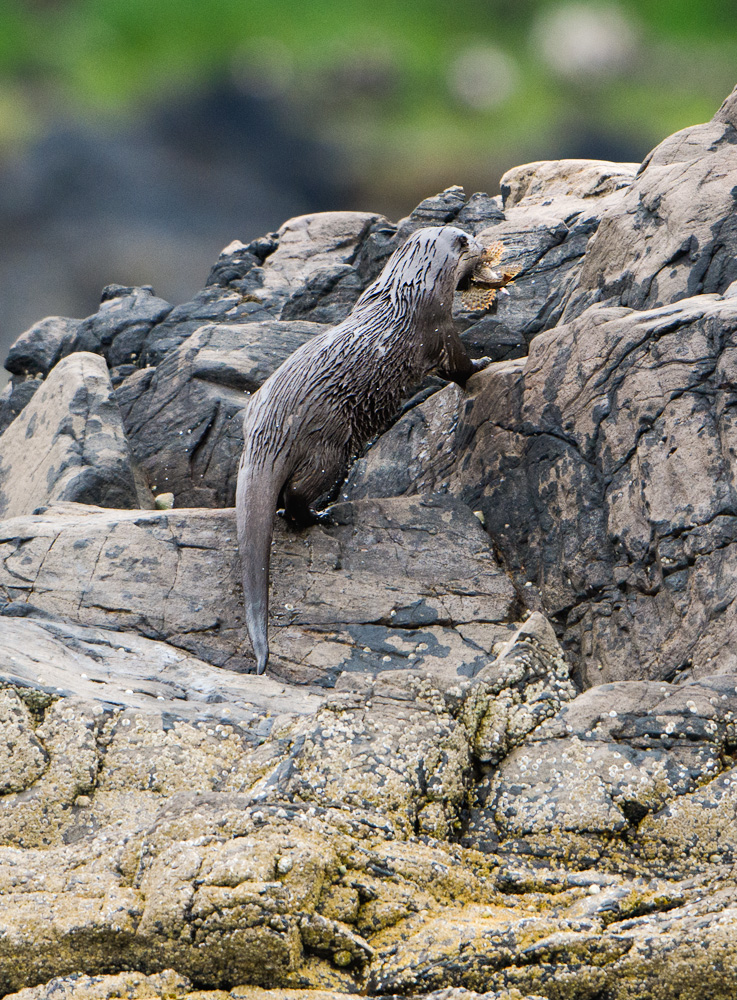 Otter with meal on the rocks

I think my inexperience with these animals meant that the otter was well aware that I was there and headed straight over the rocks without even having a look back. Not the otter images I had hoped for but a great sighting even so.

I didn’t take many more images that morning but I did grab my trail cam on the way back in and had a quick check to see if it had been triggered. I was delighted to see that there was indeed some clips, and, even more exciting was that when played back there was no doubt of a Pine Marten in the area. Game on! I now knew that I would be setting up my remote camera and flashes that evening to try to get some shots. I’ve included one of the clips below. The quality isn’t great but there’s no doubt about the animal that triggered it. One tip though…If you are going to put out a trap with a view to finding out what visits when, it helps if you actually set the date and time ….DOH! 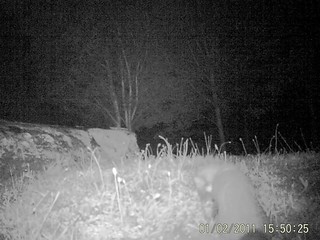 The light wasn’t the best later in the day but I took some time to photograph birds that were visiting the bird table. There were so many Siskin around, a bird that I tend to only see in winter, and not every year, that I jumped at a chance to get some decent close up shots. It’s surprising just how yellow these little birds are – 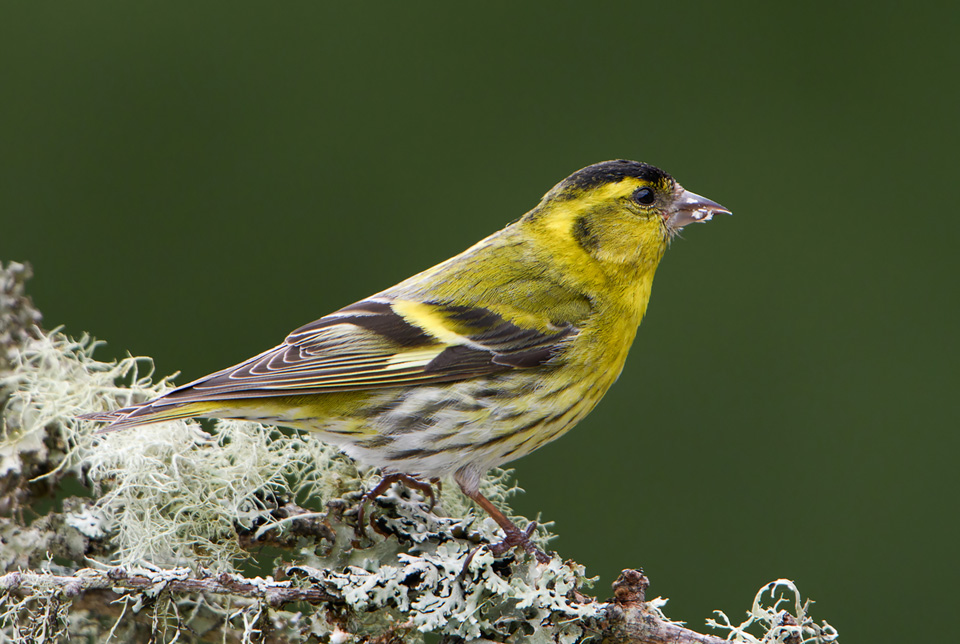 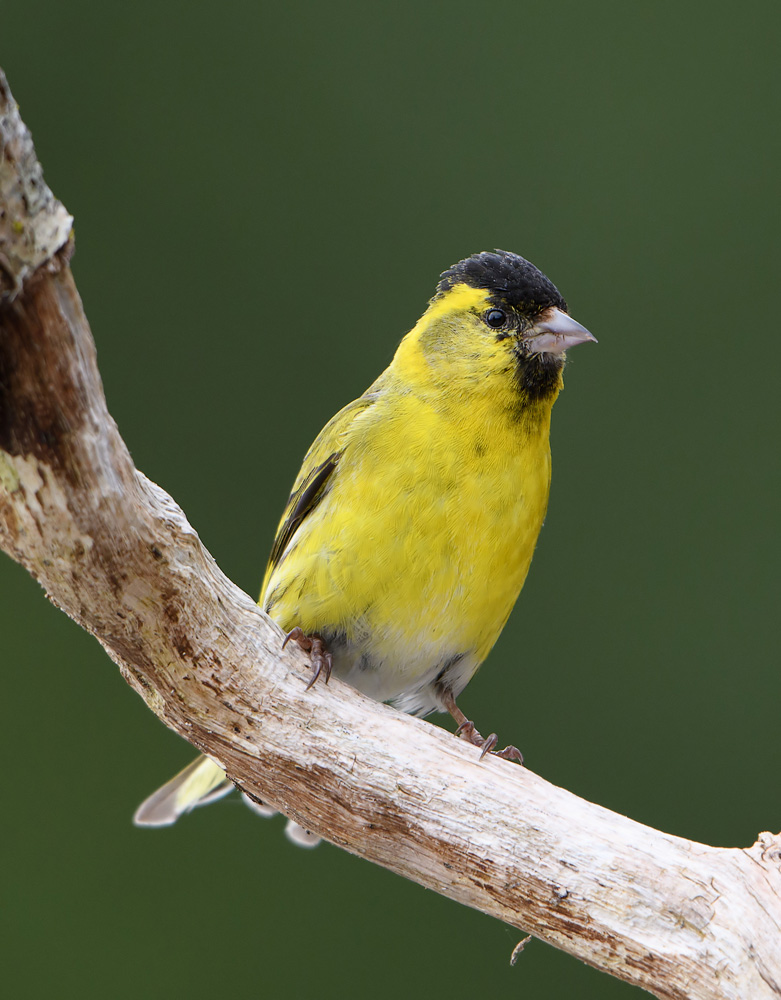 There were plenty of the more common birds that I would expect to see such as Chaffinch, Blue, Coal and Great Tits, the odd visit from the Blackbirds and Robins and also the Great Spotted Woodpecker. One other visitor that I definitely don’t get to see in my garden (in fact have ony seen a couple of times at all) was the Redpoll. Another small finch that wasn’t shy. 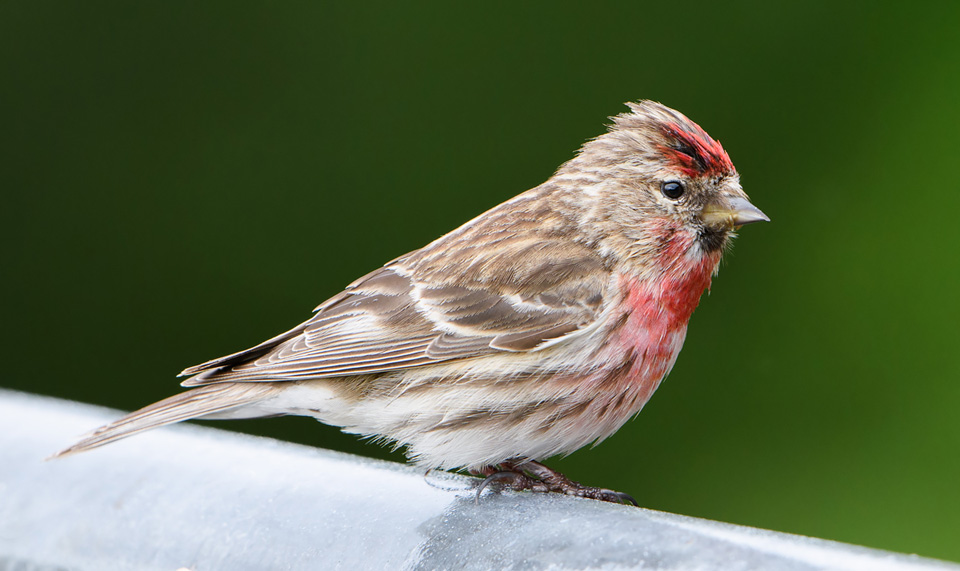 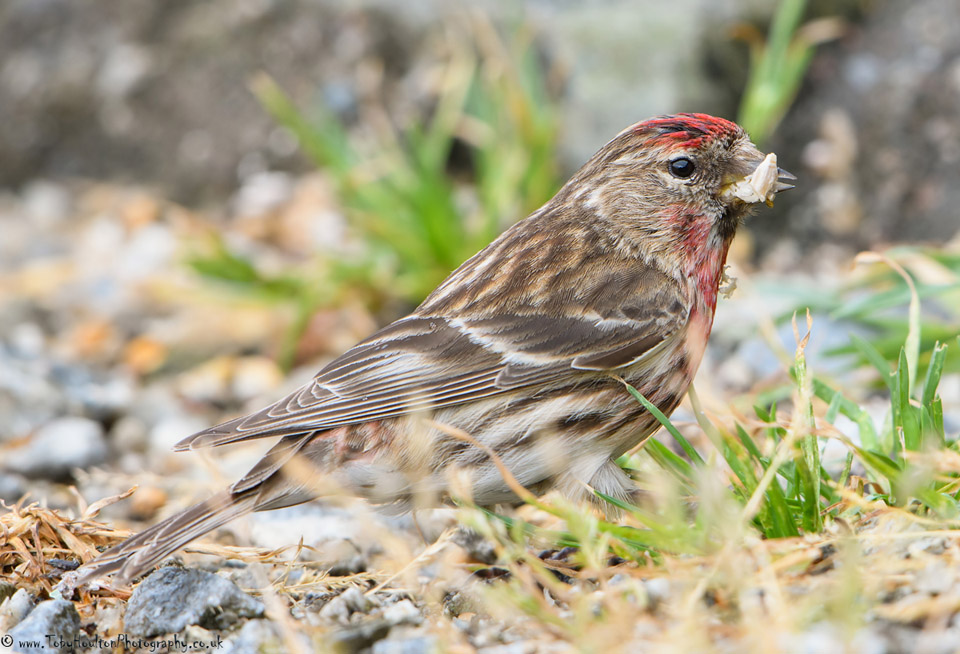 Later in the day I again walked down to the shore line to see if I could get any otter images. No luck but a bird call from a small tree close by had me pointing the lens and waiting to see who the culprit was. Eventually I spotted a Yellowhammer making a constant single call and moving about every so often. I stood and watched and eventually it flew into the open and perched perfectly on a flowering floxglove flower. I couldn’t have asked for a better perch…. 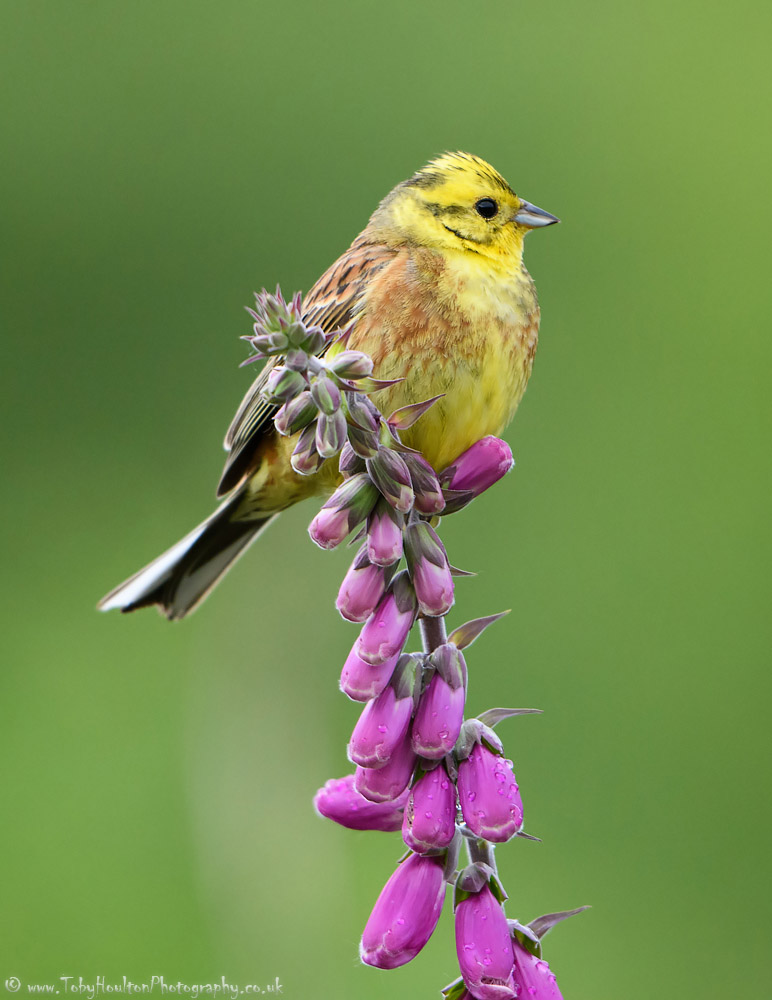 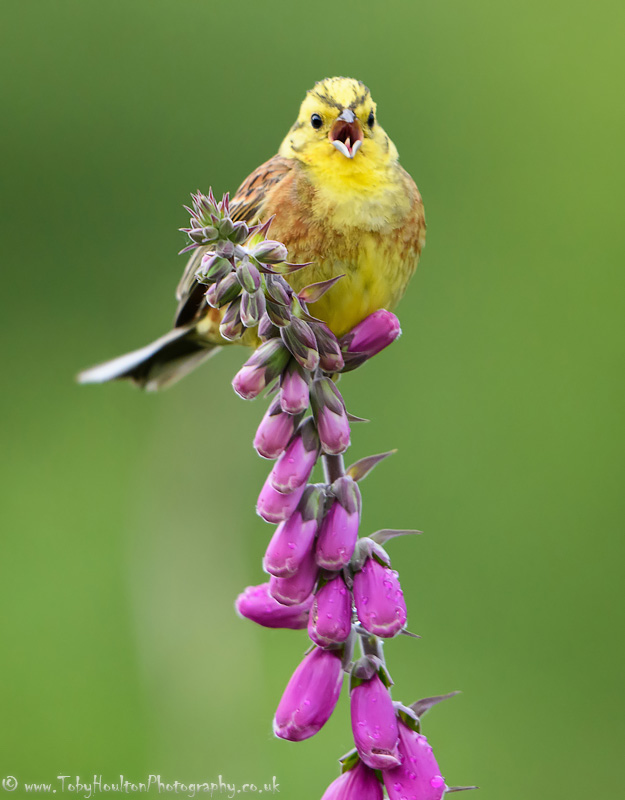 I really struggled to get any good images as the light was pretty poor and for once I hadn’t taken my tripod with me so was handholding the 500mm lens. Even with VR on I only just got these couple of useable images from 10 or so that I managed in the short time he perched perfectly on the foxglove.

Having confirmed via the trail camera that the Pine Marten was about, the next couple of nights I baited an area and set up my camera with a couple of remote flashes and waited to see if it would once again show. I don’t have any experience with these animals but I do know they are mainly nocturnal so made sure all was in place at dusk. I fire my remote setup manually using Pocket Wizard Plus X units. One in the camera hotshoe, and one each attached to the flash units, normally placed away from the camera and facing 45 degrees to where I hope the subject will stop. This should stop any red eye issues. Our second night and once again the Pine Marten showed up at around 10.40pm. I took maybe 30 or so images using the remote in my hand and once the visit was over, retrieved my kit and checked the images. Not so good – subject was too small in the image and the images were fairly dark…I’d set up too far away and had the flash unit power set a little low.

The next evening I moved the setup closer and boosted the flash power. This time the images were better but could still use some work. Distance wise the kit was about right but the images were still a little dark. A few tweaks still needed but I did manage one or two images I was reasonable happy with…. 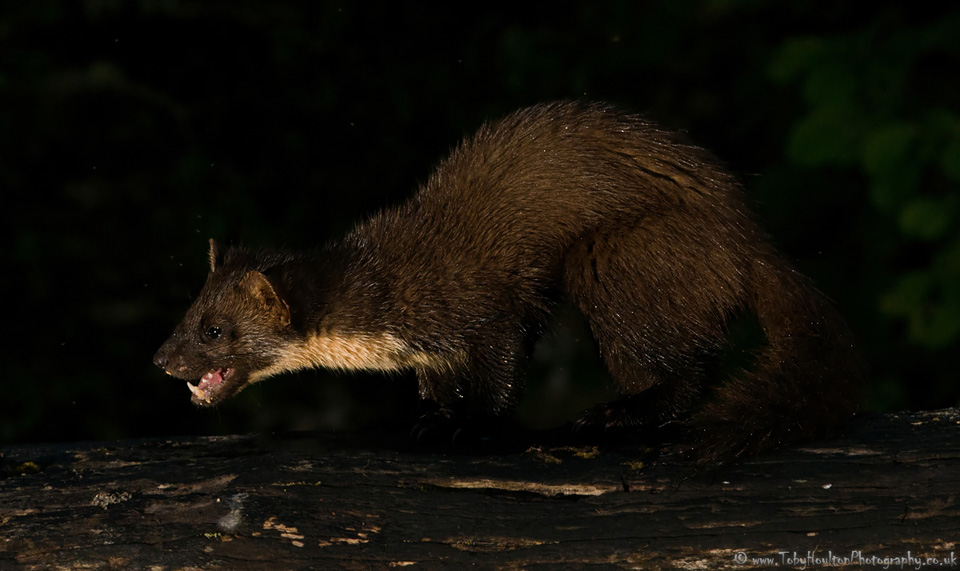 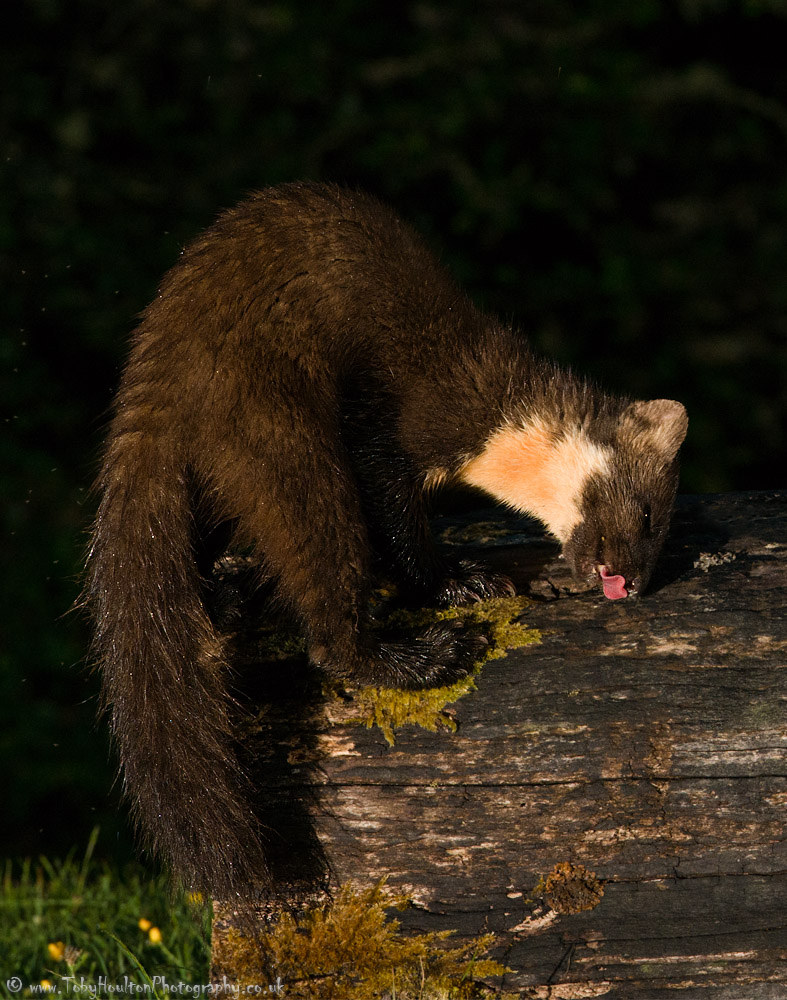