Taking the time (in Pembrokeshire) – Part 3

One of the main reasons I wanted to visit Pembrokeshire was to finally visit Skomer Island. This Island, managed by the Wildlife Trust of South and West Wales, must be one of the best known places to see Puffins in the UK. Consequently, during the periods that seabirds, and especially puffins, are nesting on the island, it is very popular. I wanted to share my experiences of the two trips we took whilst in Wales. 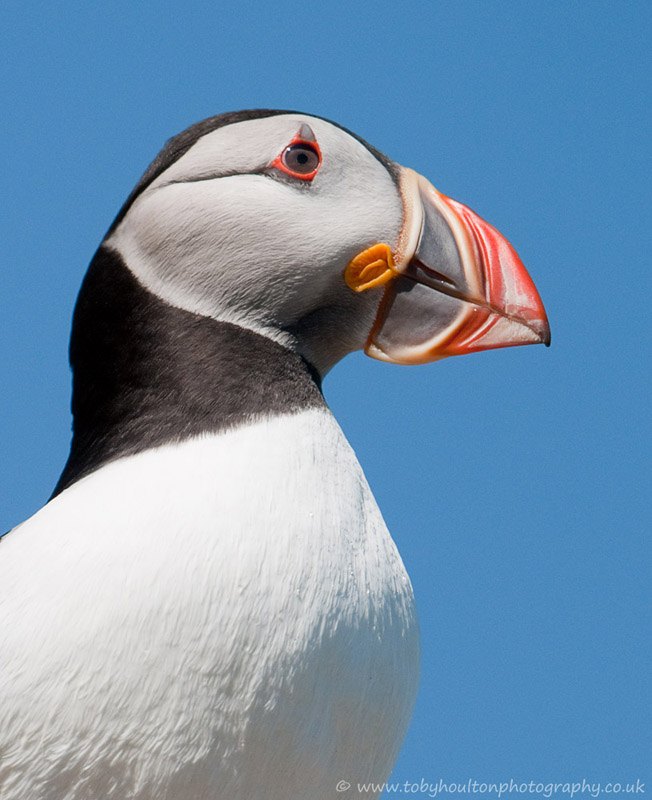 Firstly, and I can’t stress this enough – you need to be there EARLY. There is no pre-booking and is strictly first come first served. The carpark will cost you £5 for the day (fair enough really) and the ticket office opens at 8am (ish) even though the first boats don’t leave until 10am. I highly recommend getting there for 7-7.30. Even arriving at 7am there was a queue building and if you want to ensure a spot on the first boat (carrying 50 people) then make the effort. It’s worth it! You buy a ticket from the lodge (like an island permit really) which then reserves you a spot on the boat. You then pay your boat fare actually on the boat. The boats are quite snug when fully loaded so be aware that If you carry a lot of kit you are better off sitting in the middle and keeping your rucksack on. All info about the island can be found HERE . Be aware that the Island is closed on Mondays.

After you have your boat ticket secured you have a couple of hours to spare. Luckily you are in a beautiful location and if you head onto the headland (Deer Park – no deer here tho!) you have a chance to see Chough and the coastal views are stunning. 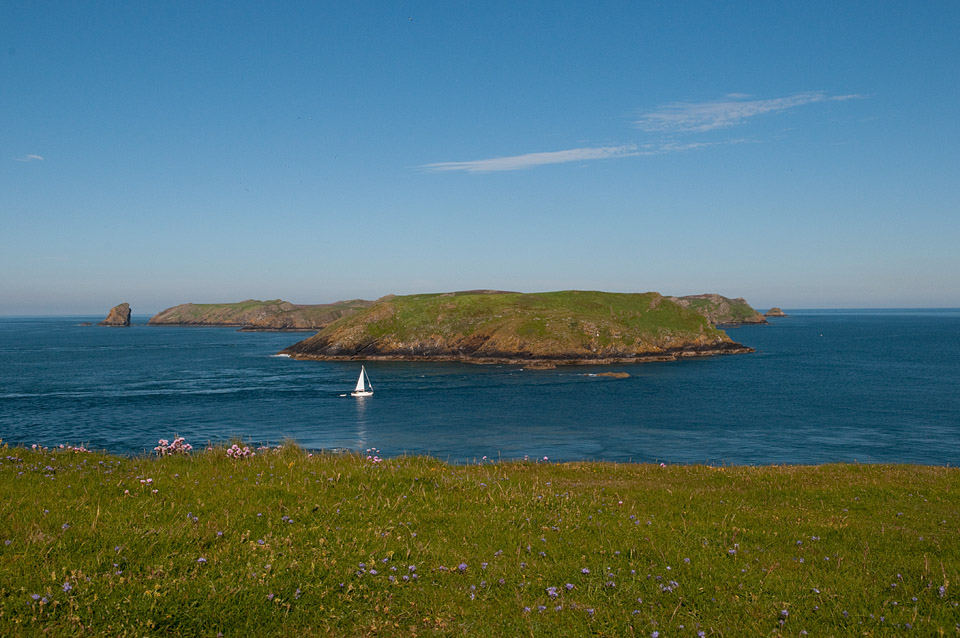 View of Skomer from Deer Park

During our week we visited twice. Having never been before I wasn’t aware of quite how large the island is and wanted to make sure we had a good look round. The boat trip out is quite pleasant and as you get nearer you start to see clouds of wheeling birds in the air along with puffins, razorbills and guillemots zipping across the surface of the water. As you head over to the landing stages there may well be a large raft of birds on the water surface. One thing’s for sure, no-one is disappointed. You get fantastic views before you’ve even stepped off the boat. If like me you are chomping at the bit to get snapping here’s a tip. Don’t worry about rushing off the boat and charging up the hill. Everyone is gathered up and the ranger does a short and important chat about the island and making sure you don’t stray from the paths. So It doesn’t matter if you are first or last off the boat, it makes no difference.

When you get let off the leash you have a few options where to head and most people head to “The Wick” right away. This is the best place to see and photograph puffins so is the obvious draw. I didn’t do this as I was also hoping to see (maybe photograph?) the Little and Short Eared Owls, both subjects I have never really managed to get images of. We headed towards the farmhouse (and the accommodation if you stay on the island) as I had read that the Little Owls like the stone walls around that area. We struck lucky and managed to get quite decent views and, after doing about 200 yards on my knees, managed a half reasonable image – 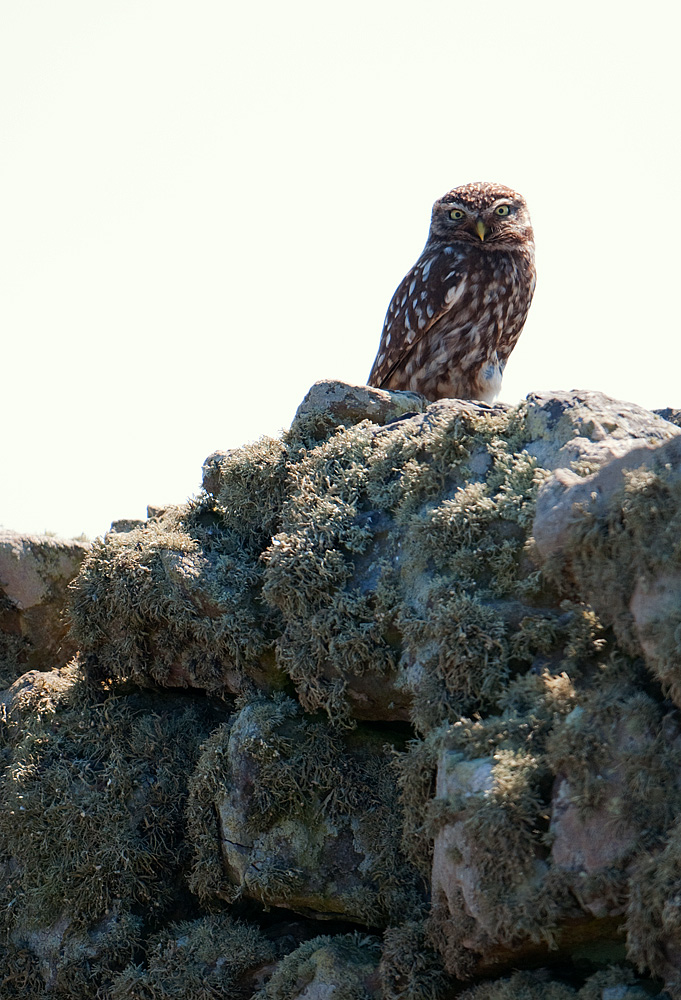 On thing I should point out, we were very lucky with the weather. It was hot and very bright. Normally this is great for a day out but for photography, especially black and white birds, it makes for some hard work trying to adjust. The Little owl image is taken into the light and meant I had little choice but to blow out the highlights in the sky. Still, was great to see them. We also managed to see the Short Eared Owl on the 2nd visit, distant but still lovely as it hunted across the swathes of flowers.

We managed to visit at just the right time for the wild flowers to be in bloom (2nd week of June). Everywhere we looked was an explosion of blue and pink as the Bluebells and Red Campion flowers carpetted the hillsides. It made for a stunning spectacle and I really wished I’d had more time to take some landscape shots. 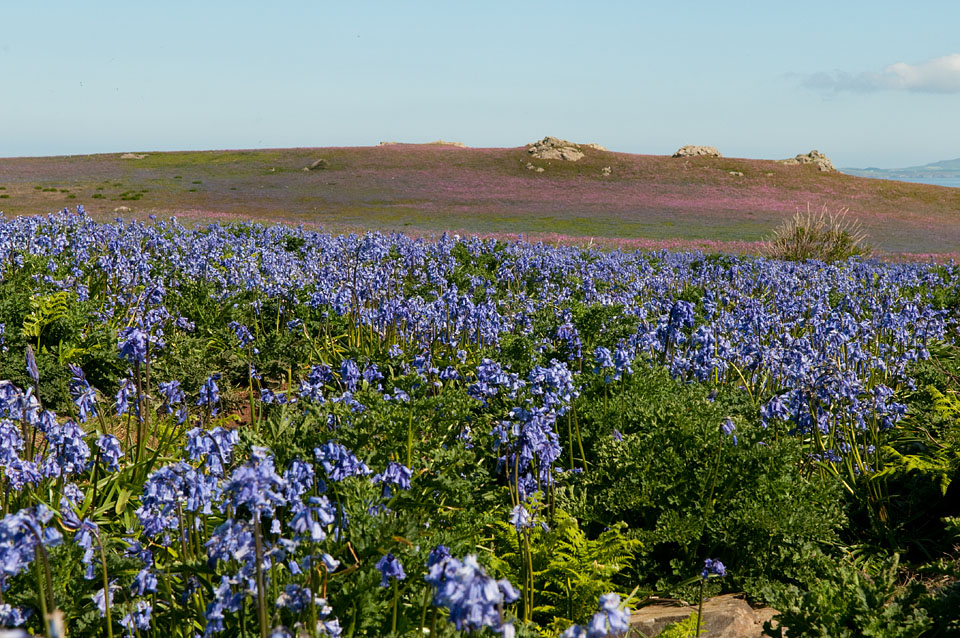 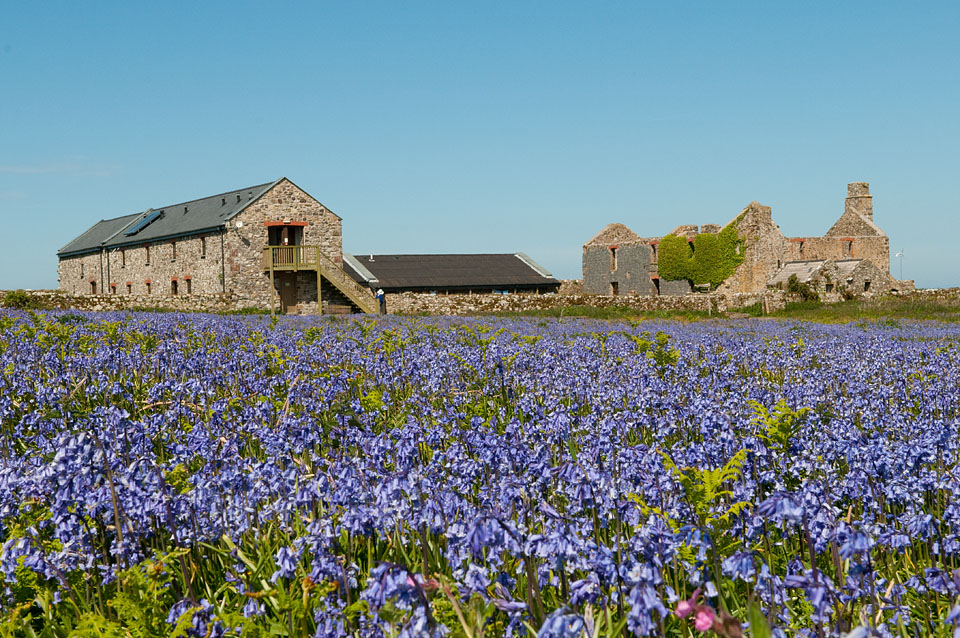 Over the two days we did a lot of walking, great scenery and loads of birds to see but ultimately it was the puffins I wanted to spend time with. We headed to the Wick which is a large steep cliff face where the puffins come right up to your feet and scurry into their burrows. There were birds wheeling and darting everywhere, a photographers dream! If you haven’t seen puffins close up before you may be surprised at just how unperturbed they are by human presence. Common sense, giving them room and respect and they will happily go about their business just a few feet from you. Massive lenses aren’t needed (although I took mine) to get some great images. Even a compact with a small zoom will do the job. I actually wanted to try and photograph the birds as they came in to land. I was also hoping for beaks full of fish but it seems we were a little early for that.

Despite how they look, Puffins are really fast in the air, their stiff wings a blur as they zoom in off the sea and put on the brakes as they near their burrows and were quite a challenge… 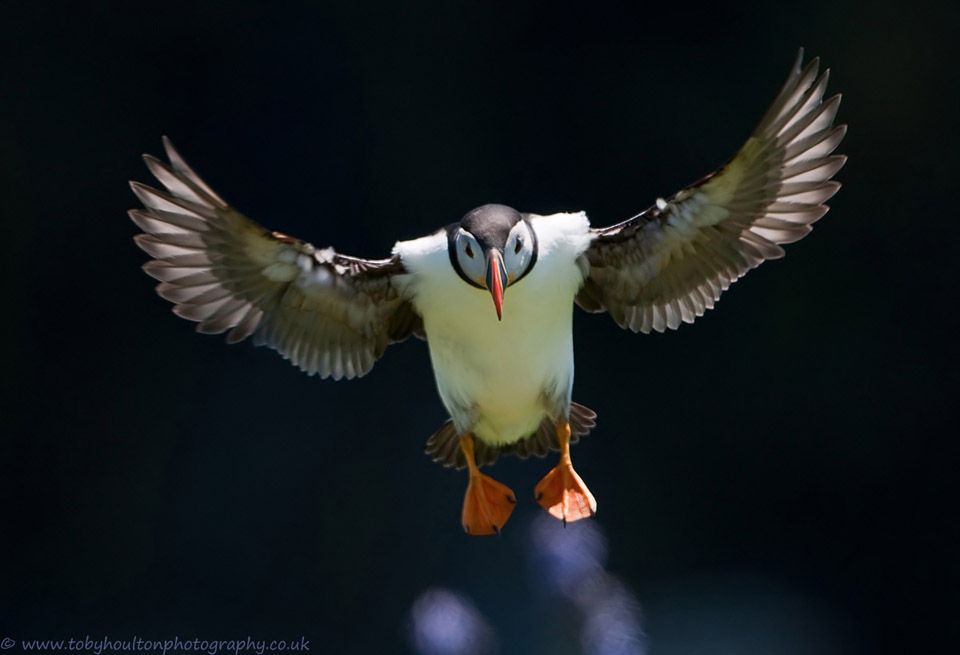 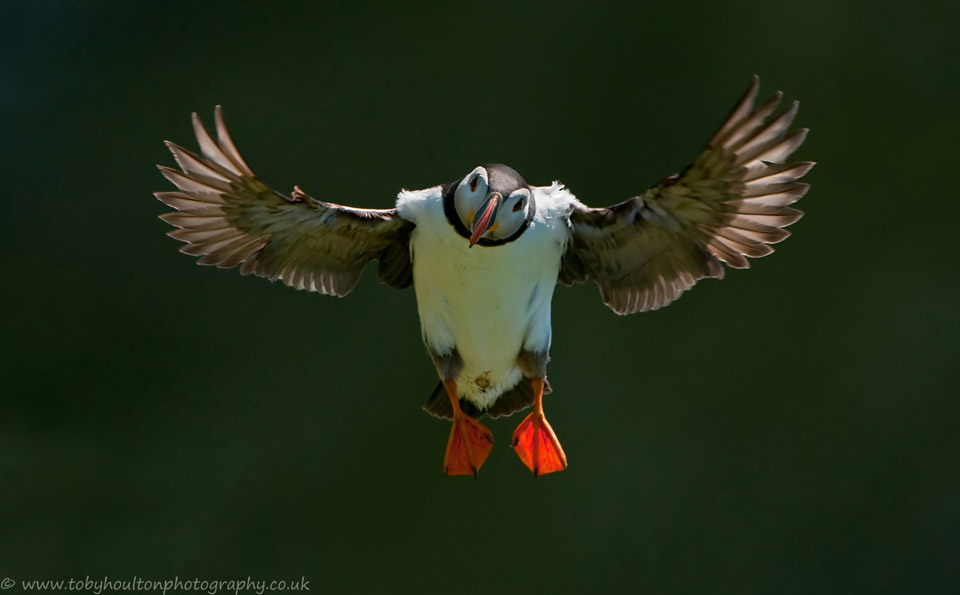 As you cannot really get in place until around 11am, the sun is high in the sky and makes for really difficult conditions to photograph. The bright light on the white of the bird has to be controlled otherwise you will blow the highlights. Most of the time I had -1.0 Ev dialled in. Also the fact that harsh shadows are created mean that if you didn’t catch it just right the contrasting dark / lights were just too much. I would have liked to have caught them coming in off the sea and managed to get some clear backgrounds. On the images above the background is the face of the Wick, the steep cliff face, in shadow.

Anyone that knows me will attest that I am really picky with my images and all the little things add up, like not being able to get decent catchlights in the birds’ eyes to give them that spark of life. If I had the chance I would love to be able to stay on the island so that I could choose the conditions, maybe next time!

Here’s another little tip. I believe our boat was due back around 3.30pm. At 2ish I headed back down to the landing area and lay on the rocks. I wanted to try for some shots of the birds on the water and also a chance to photograph the guillemots and razorbills whcih I hadn’t found a good spot for around the island. As most people were still wandering the island it also meant less disruption and with me lying still, the birds came quite close. 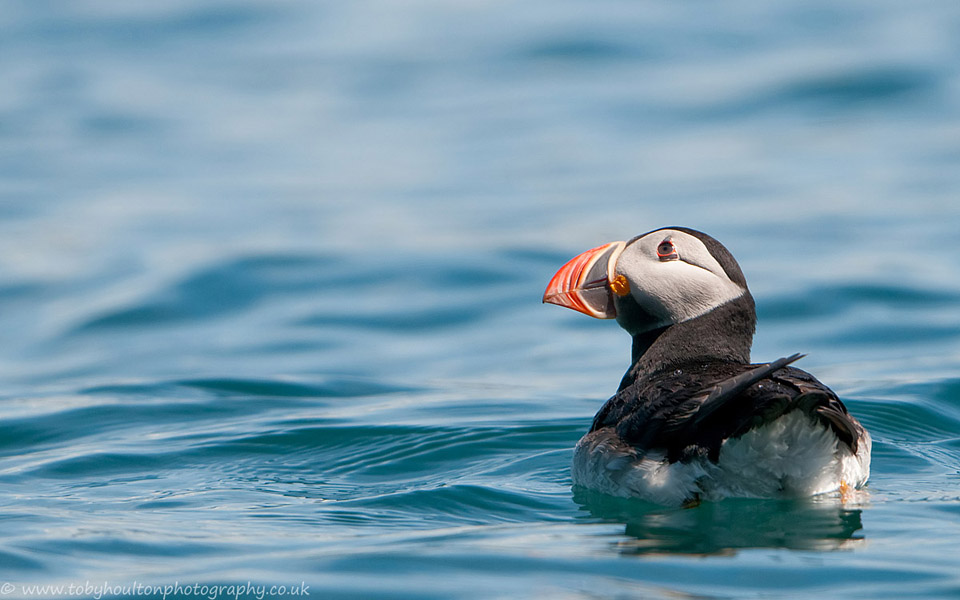 As an example of how important a catchlight in the eye is, compare the following two images – 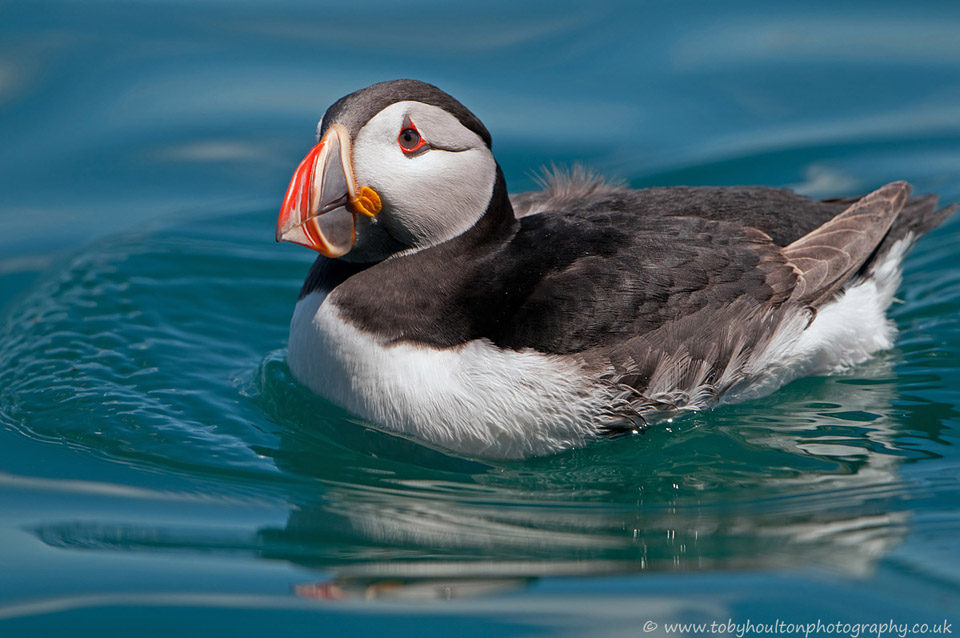 Close up of Puffin on water, Skomer Island, Wales 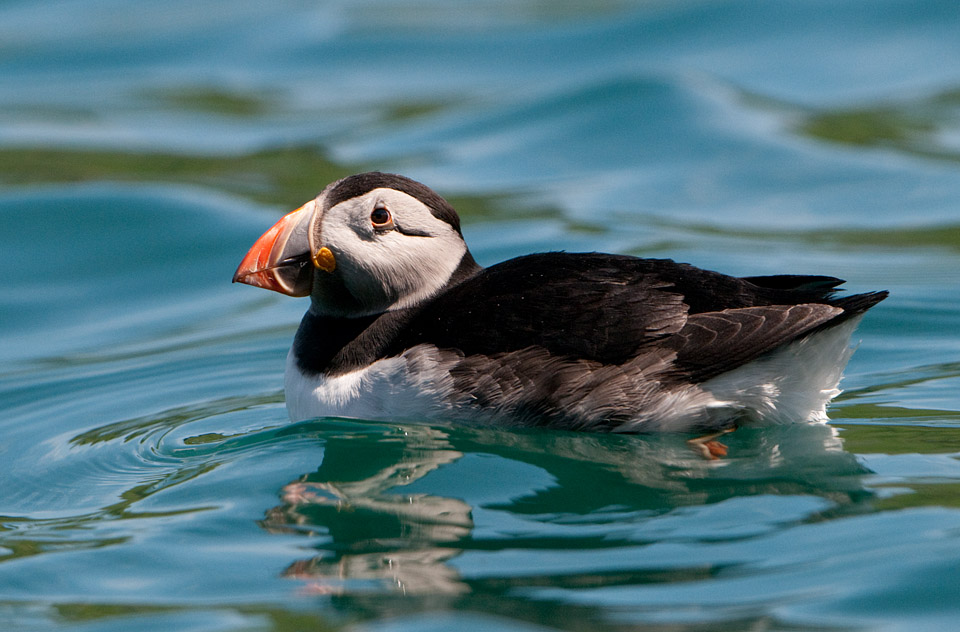 Puffin with no catchlight in eye

The first image seems full of life and much brighter whereas the second image, although the eye isn’t completely black, the lack of a catchlight detracts from the image. A small point but a big difference in my opinion. 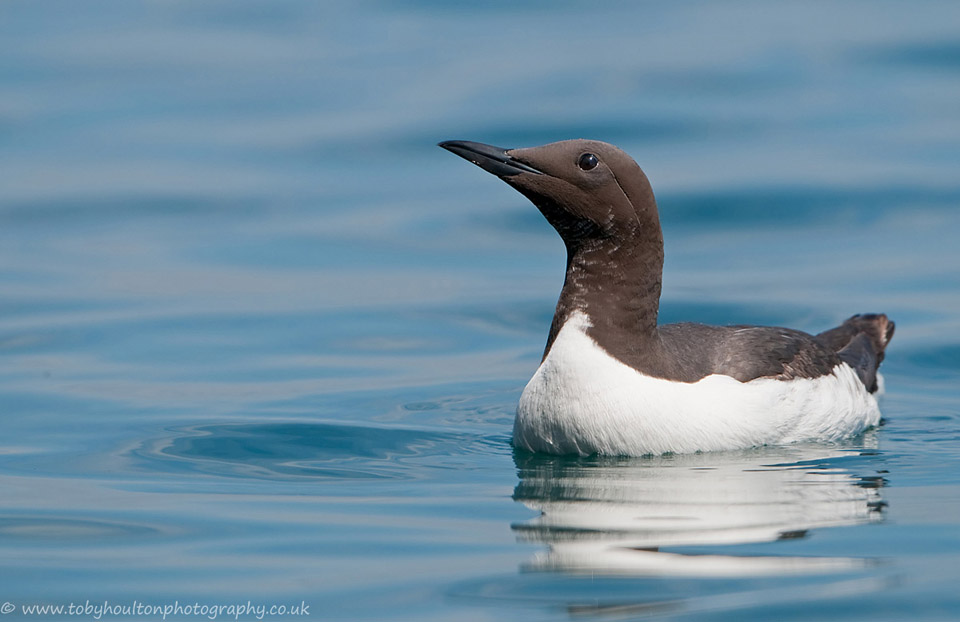 Swimming guillemot looking up towards the rocks, Skomer island 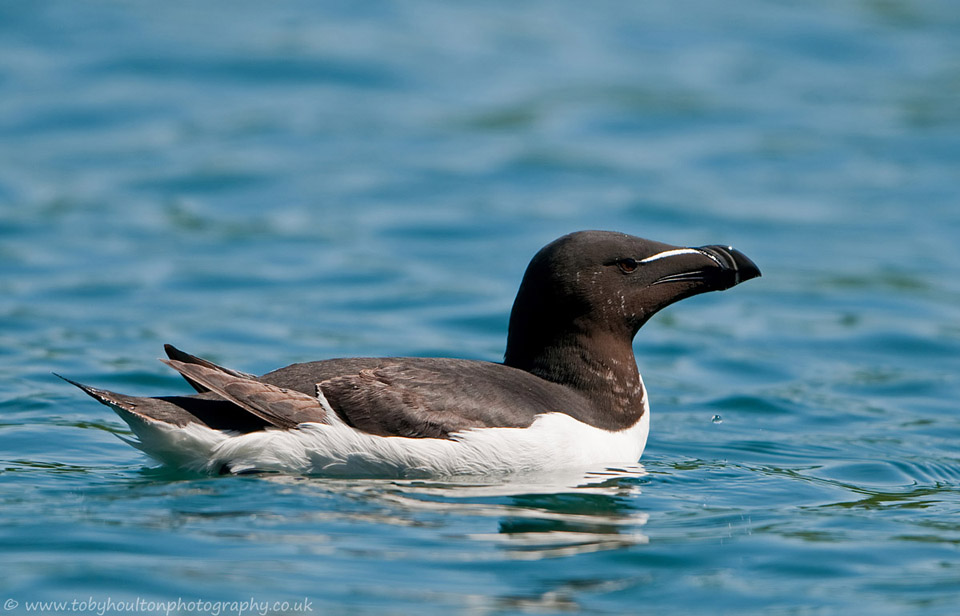 So if you are in this part of the country at the right time of the year I would strongly recommend a trip. If you haven’t seen puffins close up before it’s such a treat that it shouldn’t be missed, they are so full of character you can watch them for hours!