When we moved up here the very first place we visited was the Loch Fleet reserve. Located on the east coast of Sutherland in the Northern Highlands, it’s a stunning area of coastline where the tidal Loch Fleet meets the sea. The main tidal channel was clearly going to be somewhere I knew I would be spending some time as, within minutes of walking on the beach I was seeing Red Breasted Mergansers, Goldeneye and lots of Eider Ducks. There were inquisitive seals popping up in the water and checking us out and I even managed to spot an otter fishing in the channel. A short walk produced flocks of waders whirling across the water.

What a stunning place.

As a photographer, one thing I missed in the locations I visited in the South East of England was the ability to sit or lay quietly at the water’s edge to try and get good shots of coastal birds. Not a problem here, especially early morning in the winter. I am still refining my technique to see just how approachable (or not) various species are. Mostly the birds behave as expected – they see a human shape from several hundred yards and are already starting to head away from you. So I can’t explain why, when friends came to visit with a dog, when the dog was splashing around in the water after weed we were throwing, a pair of Eider seemed drawn to it and came really close…..bizarre!

Eiders are our heavist duck and can be found all year round. The male being a lovely black and white with an attractive green/yellow collar and beak. The female is brown and black but look closely and there is an intricate pattern to be found, both are lovely looking birds. To endear them even more they have a rather comical “ooooh” call which always gets a smile. They are also fairly social so it’s not unusual to see large groups or rafts of them as they feed together. They are diving ducks and will dive down to the sea bed to collect molluscs and crustaceans. Getting close to them while they are in the water is proving quite difficult, but by contrast, when they are flying they will happily fly really close to you as long as you are standing still. 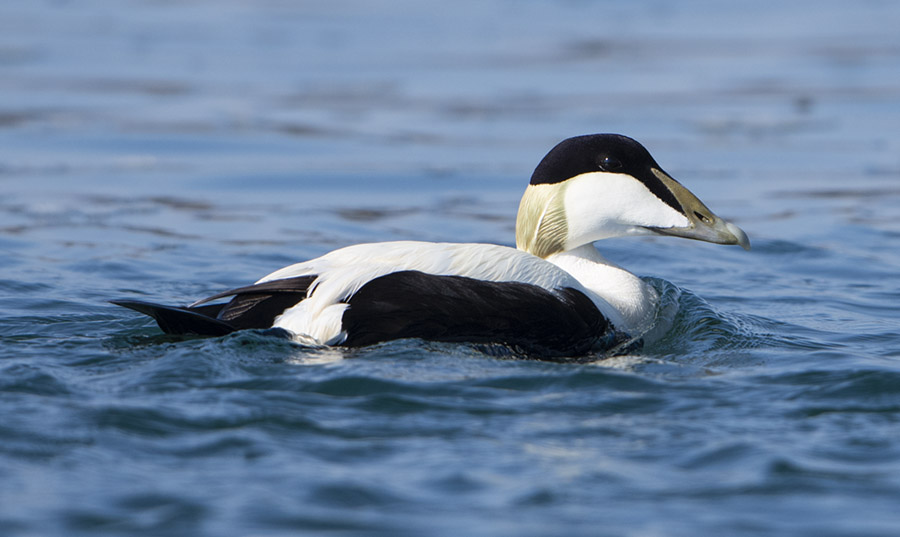 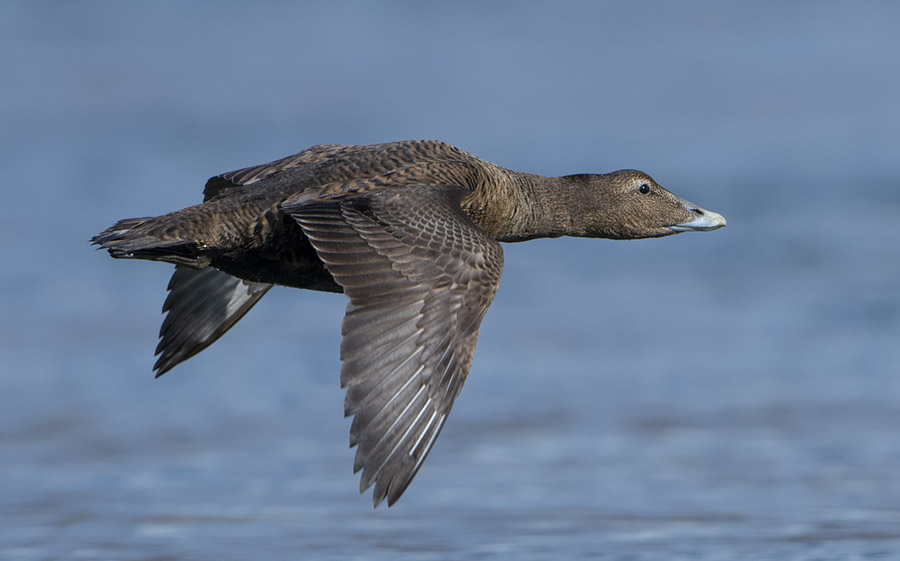 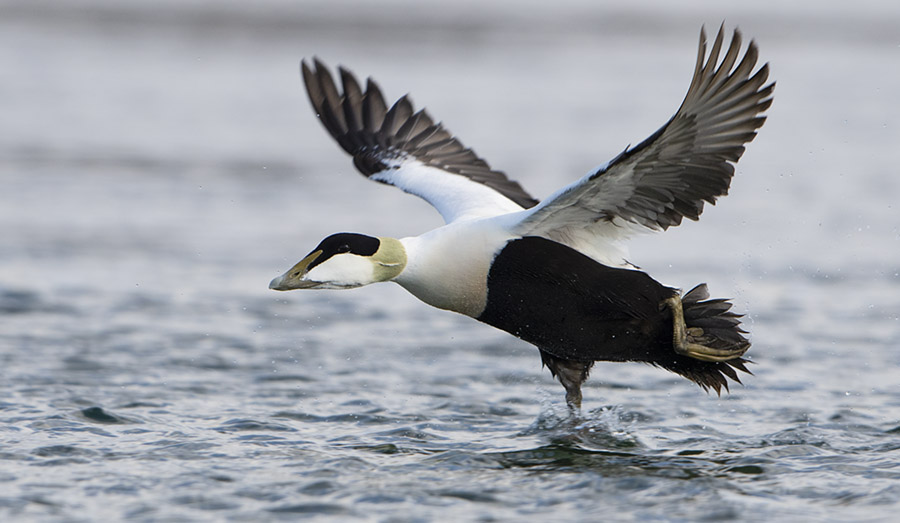 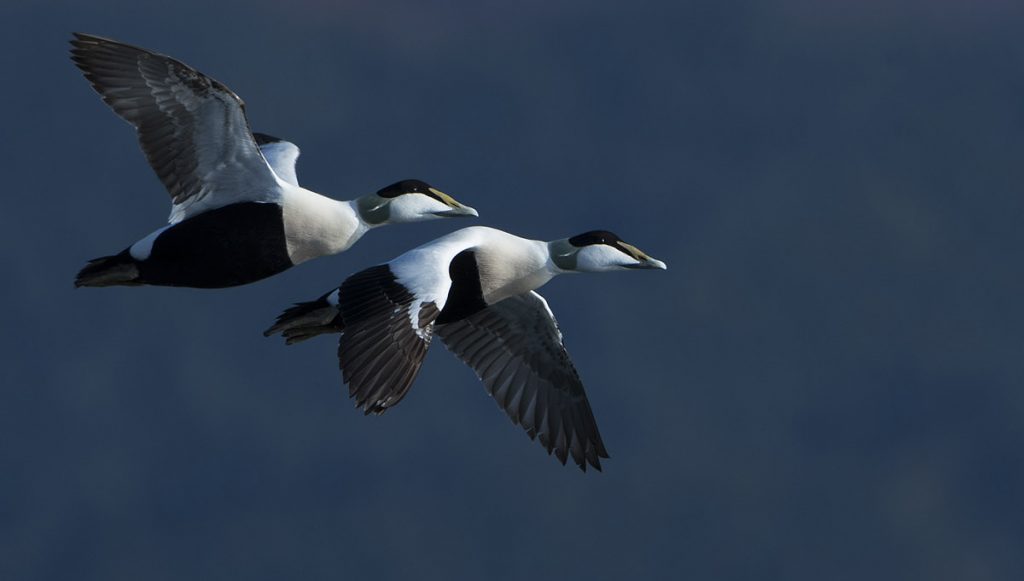 I spent some time yesterday with the juveniles that were fishing close in, diving down looking for crabs. I had to lay prone on the stony beach, far from comfortable but they at least just treat me like a rock and ignore me. They stayed mostly distant but at a couple of points came almost too close to focus on. It’s a shame they didnt catch any crab at that point! Also a shame it wasn’t a lovely male, maybe next time. 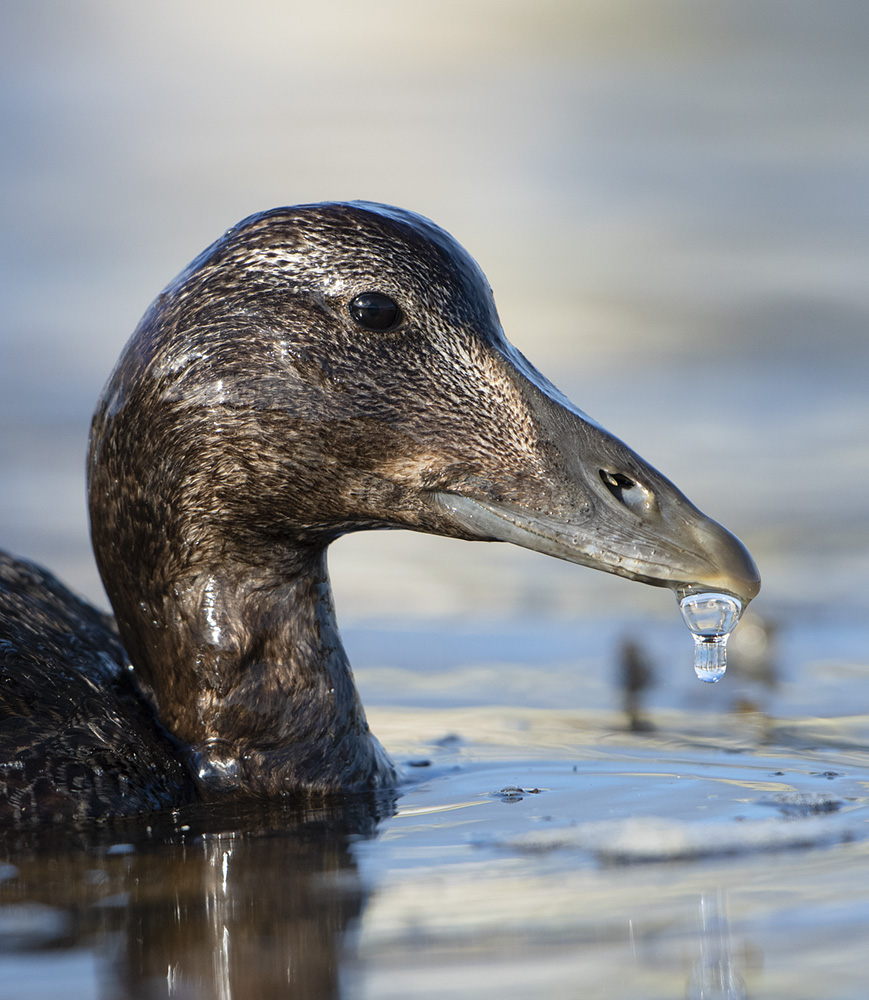 Once they do catch a crab they seem to grasp it by a leg and shake it until the leg comes off, rinse and repeat. When the leg comes off they have to be careful not to lose it to a rival as they will happily try for an easy meal. 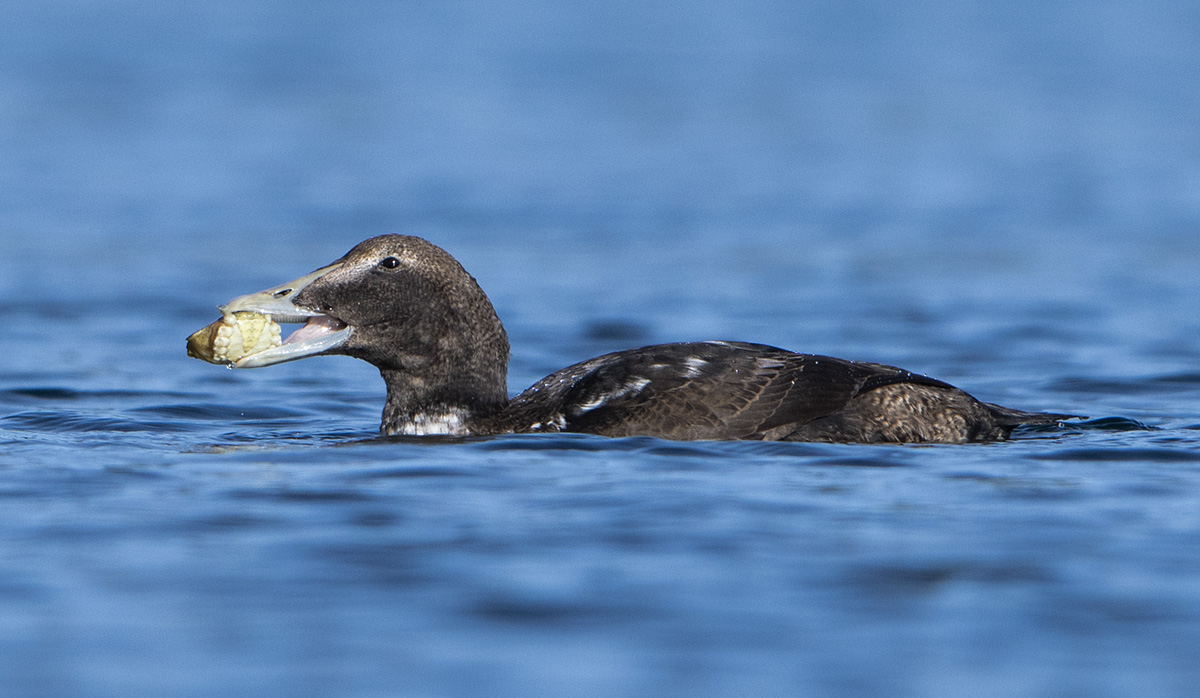 Another fantastic bird that is abundant here is the Red Breasted Merganser. I’m finding them hard to get close to but they do fly past often. In this image the female leads with the male behind – 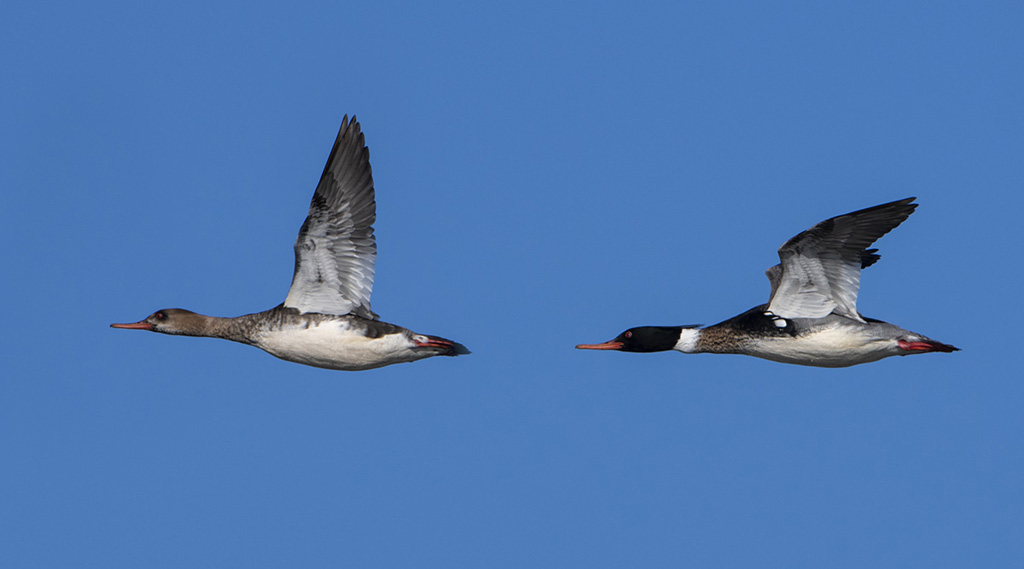 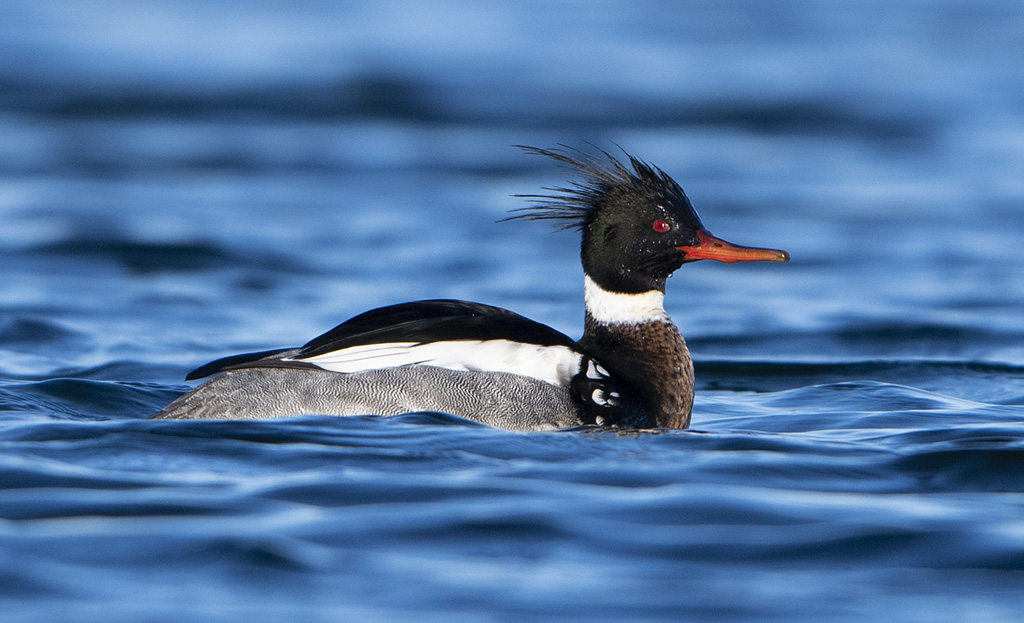 I’ll be spending some time trying to get images of them fishing, I know where to go, just need the right tides coinciding with reasonable weather and some time off work.

Winter is fast approaching and also brings a few migrants to the area. I’ve only spent one here so far and had a chance to photograph a couple of species I’ve not managed to get in front of the camera before. The first is the Goldeneye. Are you seeing the “diving duck theme” yet? I said the first two I mentioned were hard to get close to, the Goldeneye for me so far is by far the hardest. They appear to have a scare area of five hundred yards so once again the only way to be close is to hide somewhere and let them come to you. I’ve only once been lucky enough for a good look at these stunning subjects. I’ve not seen any yet this year but will most definitely be trying to get some shots of them diving and feeding. 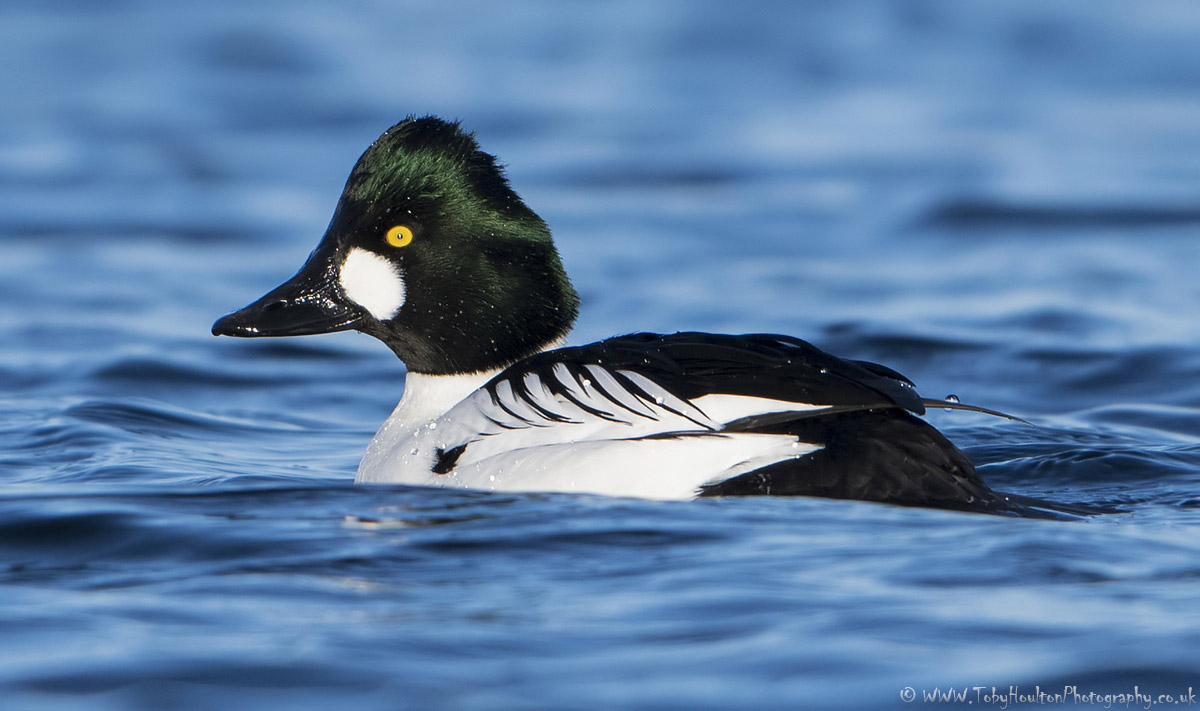 The other winter visitor (last year), and moving away from ducks, was the pair of Shore Larks (also known as Horned Larks). Small and attractive looking birds that were feeding along the pebbles and low tide areas. They were really difficult to find initially (and thanks to the birders that pointed us in the right direction) and although known to be quite accommodating, were actually a little flighty. I went for the “i’m a seal” option and crawled on my belly to get close to their general area, then waited for them to come my way. This worked once but, just as they were reaching a good distance to get images (they are small so they do need to be quite close), another person decided the best way to approach them was to just try and walk right up. I know I can be a bit strange sometimes but after watching me crawl 50 yards on my stomach did they really think I was doing that for fun? Seriously wonder sometimes. Still – lovely birds (see below) and I hope they may return again this year. 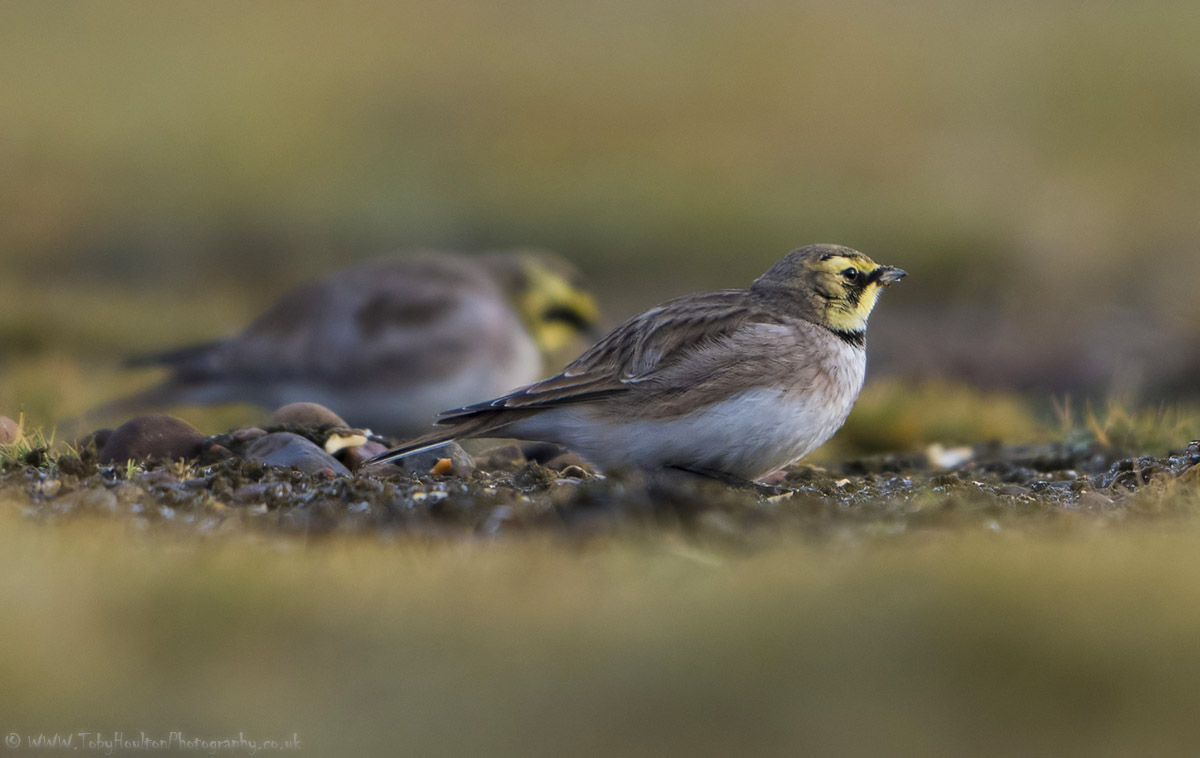 The winter will also bring back flocks of waders, amazing to watch as the tide pushes them off their roost and they wheel in the sunlight –

As you walk along the shore here you’ll see the heads of inquistive seals popping up and checking you out. There is a haul out further inland on the sandbanks nearby and the laybys on the road afford decent views at low water. I have, so far, had one magical moment with a common seal. Whilst out at the mouth of the loch, I noticed a seal had hauled out on the beach behind me, the first time i’ve witnessed this here. I was hoping to get an image or two but with an approaching dog walker coming right towards it, and past me, I expected the seal to hurry back into the water. The dog owner was a regular here and said she hadn’t seen them do that in a long time. Sure enough the seal did head back into the water well before the dog came close. No drama there but I did expect that to be the end of the encounter, but no. A few minutes later there it was again. My wife and I backed up the beach and inched along the dunes at a respectable distance. I then did my much used “seal impression” and was on my knees then belly to slowly move a little closer.

The seal was very comfortable and decided to just have a lazy nap, with one eye half open, just 40 feet or so away. I was using my larger lens so was treated to a wonderful hour with this animal that must be amongst the masters of relaxing. 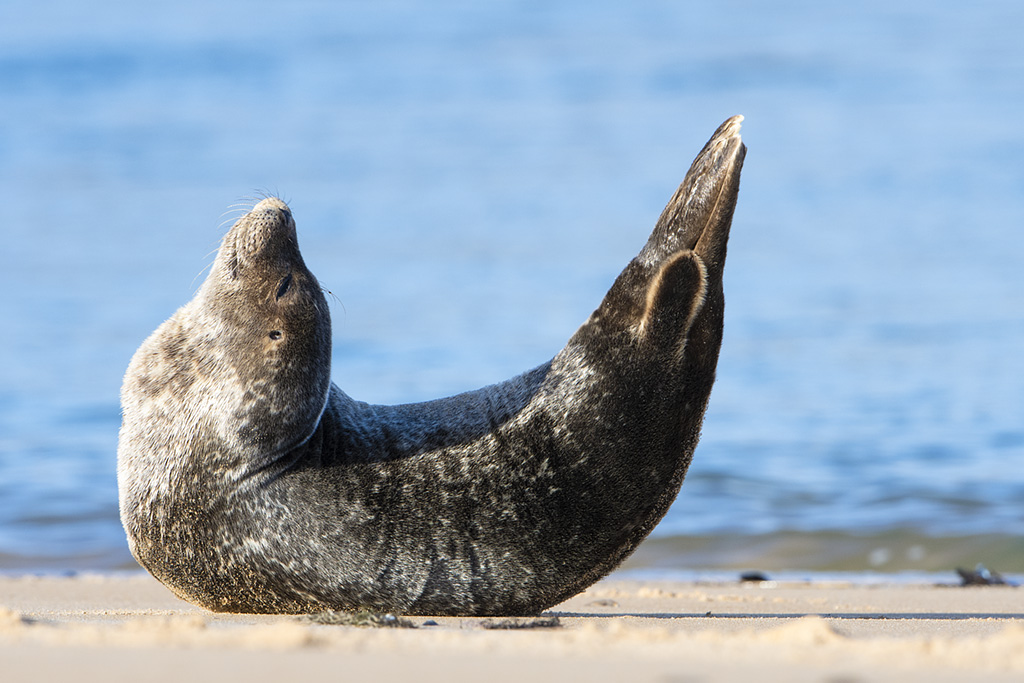 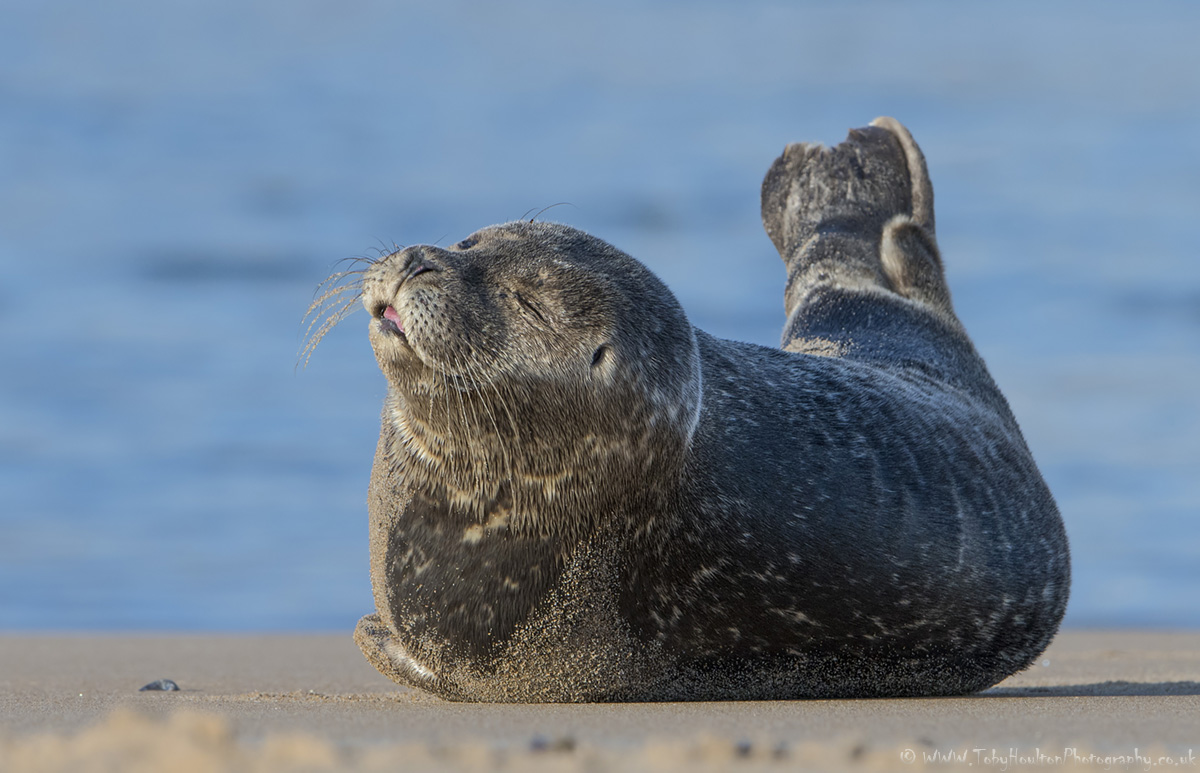 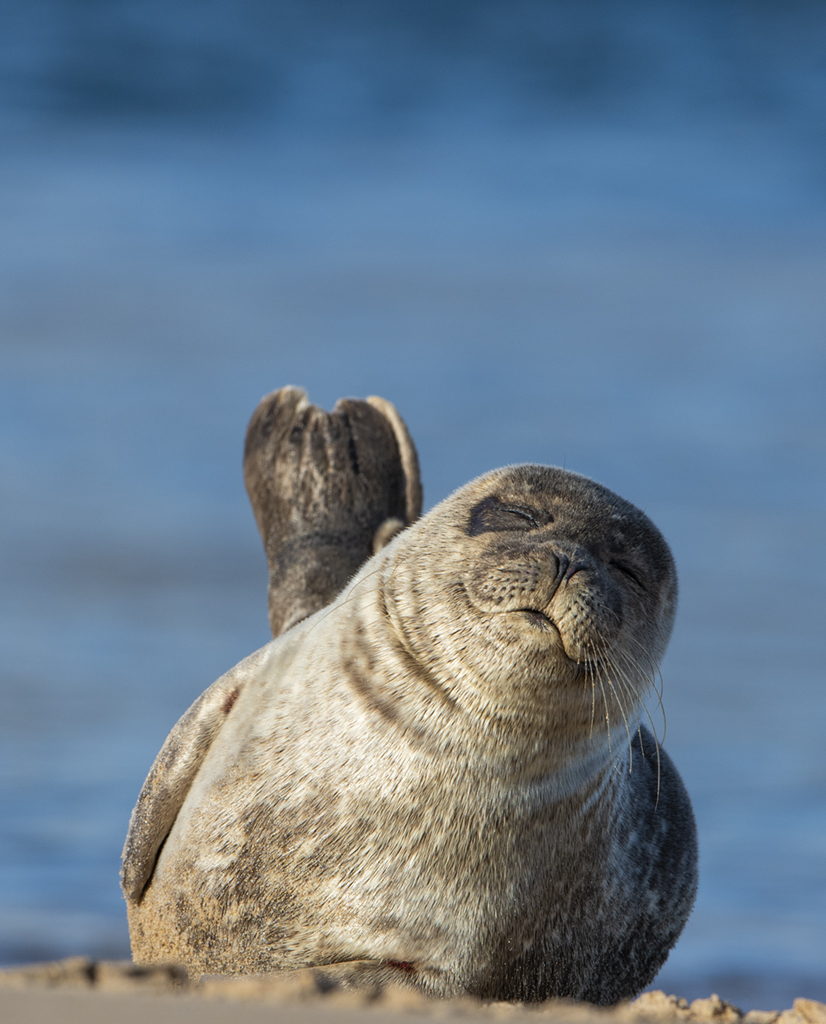 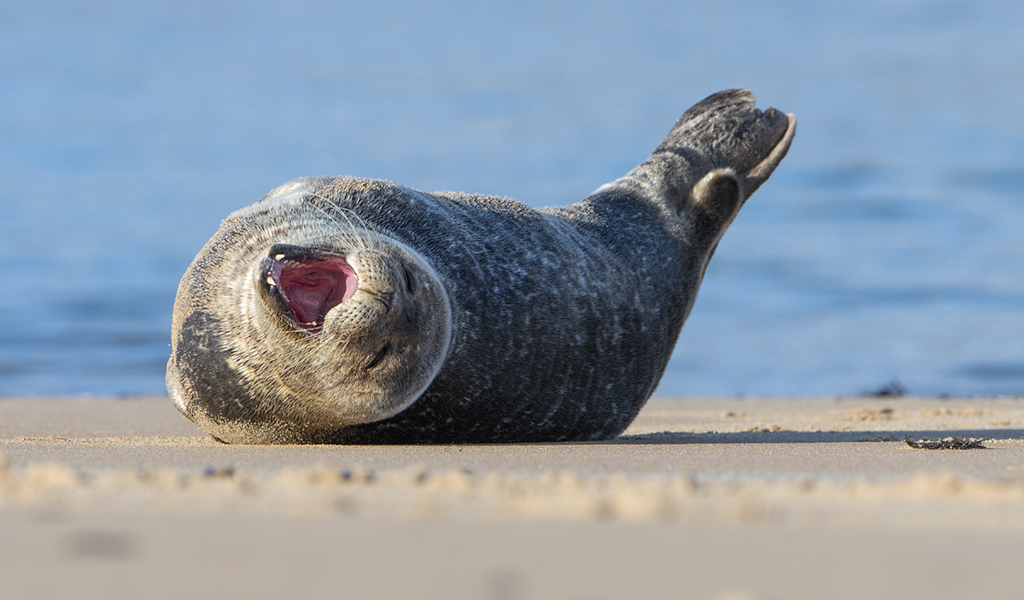 This was one of those moments that will stay with me for a long time, such a priviledge. My seal impression must work then! I crawled in reverse back up the beach then slowly stood and left it to enjoy it’s nap.

I hope my images go a fraction of the way to showing you what a stunning place this is. Packed with wildlife, it’s a mix of pristine environments that deserves to be left for the wildlife. This is why I’m astounded that planning permission for a golf course (at Coul Links a short stroll down the beach and pretty much on top of this location) – has even gotten off the ground. Of all the places to choose, and believe me the whole area is quite beautiful, why would someone decide to try and build it on a triple protected (Ramsar Site, SSSI (Site of Special Scientific Interest) and International Special Protected Area) and have the audacity to say they would “improve it”.

I understand the need for local jobs,commerce and to bring money in but why choose here?

My understanding is that the Highland Council went ahead with approval despite being advised to reject it by their planners. The decision has now been “called in” for review by the Scottish Government. I seriously hope they send the right message here. To even be allowed to consider this site given the level of protection really makes me think that the deeper the pockets of the planner (a billionaire american no less. Remember Trump’s similar promises?), the shallower the law.

There are many organisations fighting this proposal including The RSPB, Scottish Natural Heritage, Scottish Wildlife Trust and Buglife

These bodies have a wealth of information about why they are opposed to the development which, if you wish to learn more, I urge you to have a look at, they can explain it much better than I in a few short words here. Apologies for ending on a sour note but there is still hope for this site. If we can’t fight when a triple protected site of environmental importance is under threat then when can we?