A day of reflection at Elmley Marshes

With a forecast of almost no wind and a bright sunny day I just knew I had to get out with the camera. Elmley was my choice of venue. It’s around a 80 minute drive from where I am and as, in my opinion, the entrance track as the sun is rising is one of the highlights of the reserve in my opinion, it meant a really early start.

As I turned from the road and started down the access track I could already see a large flock of birds wheeling around. A good number of starlings were gathering on the fields to feed along with a decent sized flock of curlew.Being such a still day inevitably meant fog. Although a little jumpy, I took a few shots of the curlew feeding in the field.

With a lot of water in the fields from the recent deluges we have had, my eye was naturally drawn to the reflections. It’s rare to have such a calm surface to the water and as even the lightest ripple can make a decent reflection difficult, I tried to make the most of the situation.Moving the car very slowly forward I changed the angle slightly so that I could include more birds. I was hoping they would go closer to the waters edge but before I could manage many more shots a passing Marsh Harrier put them to flight and I had to watch them wheeling away through the fog and landing further out.

A lovely way to start the day, the ethereal fog and their haunting calls. 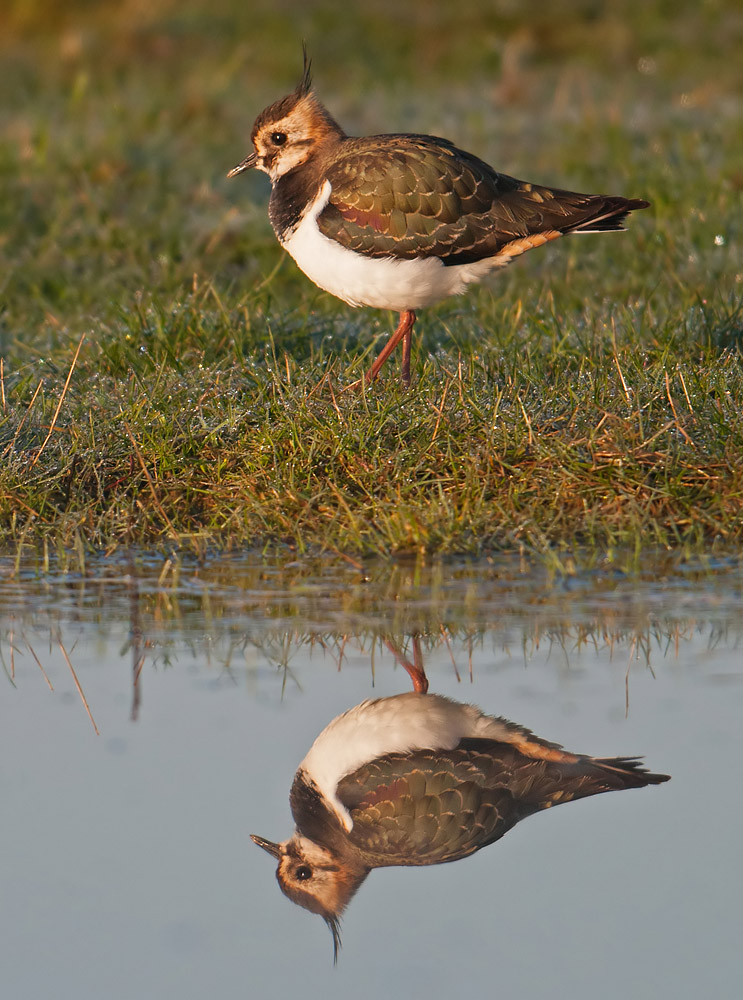 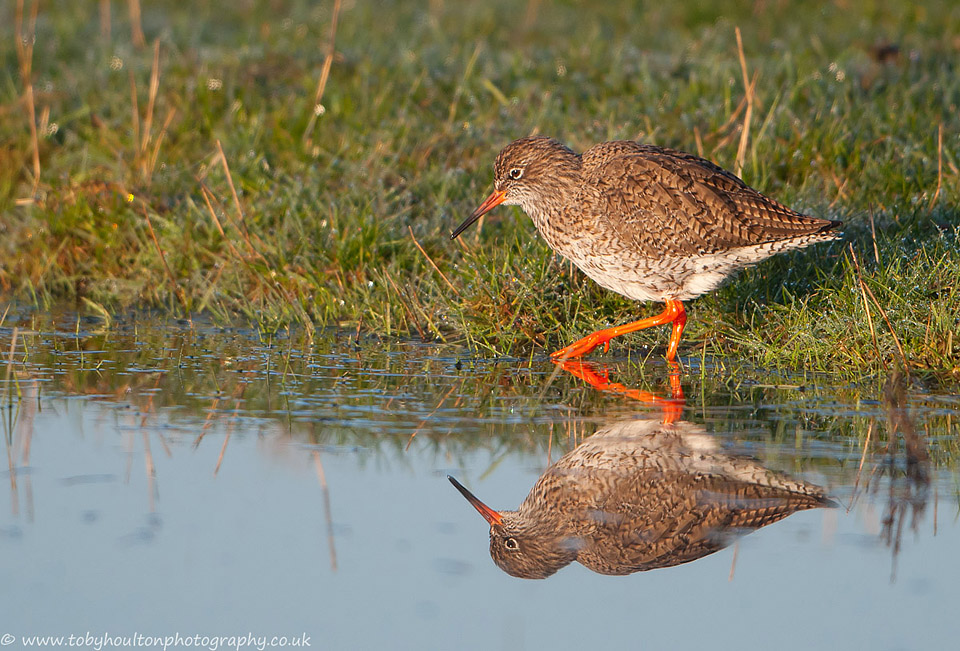 And my personal favourite.. 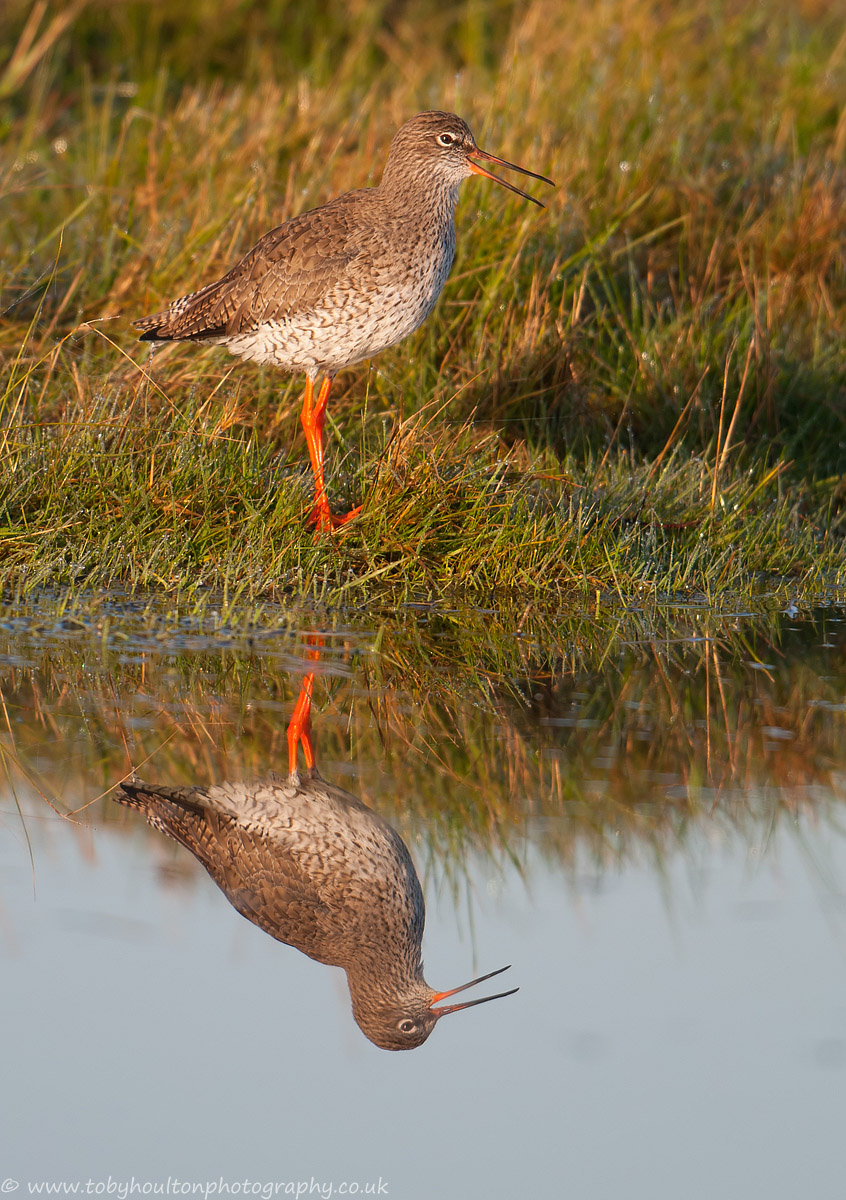 Whilst driving slowly along the access track, as long as you take it really slowly, it’s possible to get incredibly close shots of some of the birds, especially the waders. They don’t see the car as a threat and your shape is well hidden so if there are no sudden movements they will allow views like this – 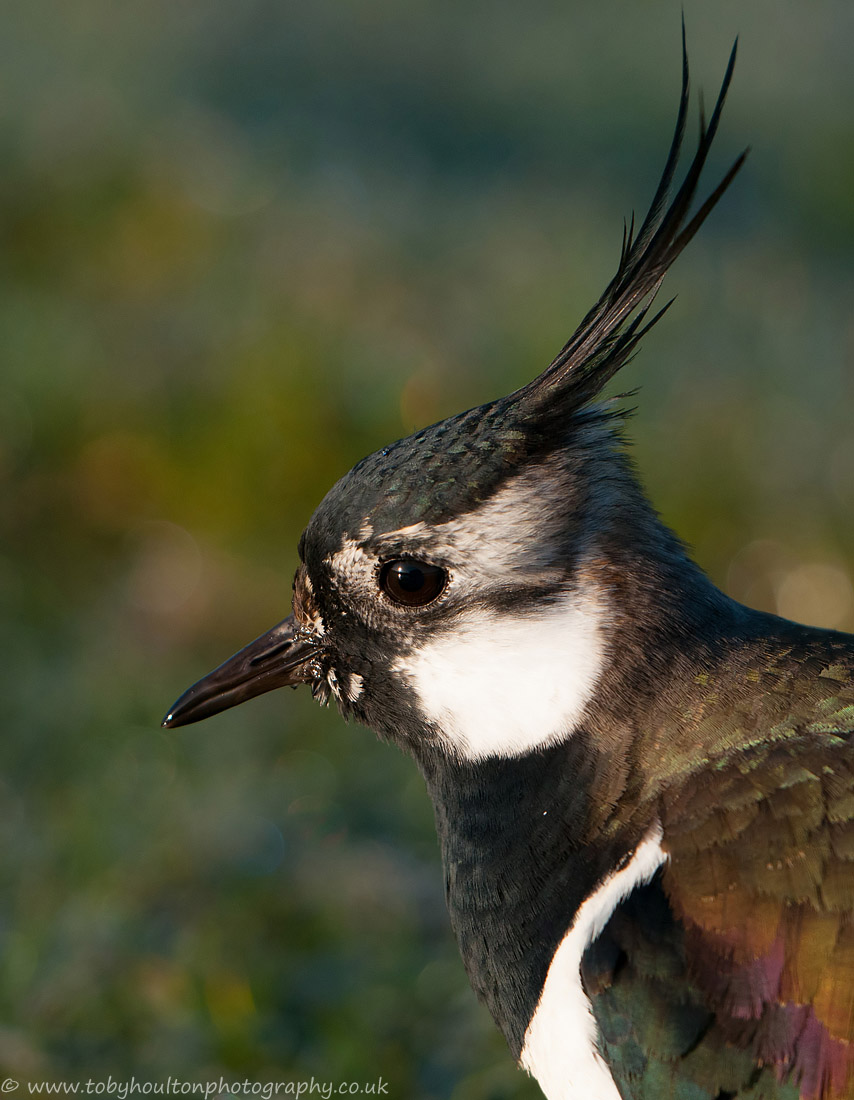 After parking up at the farm I started the walk to the main part of the reserve. The numbers of birds here really is quite a spectacle and you realise just how many wildfowl are in the fields and pools when a raptor flies through and scares them. The bulk of the birds in this image are Widgeon and was just a small part of an enormous flock that my 500mm didn’t really do justice to. 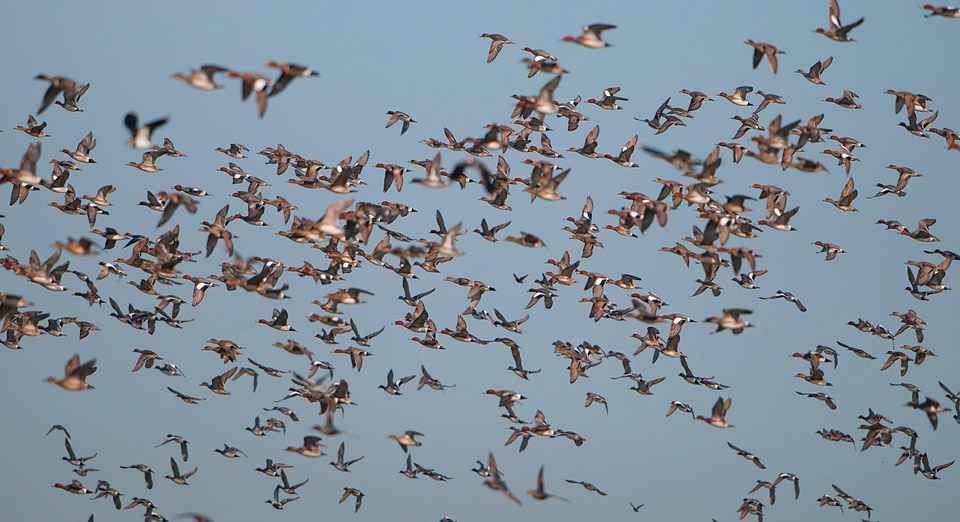 One of the birds I really hoped to get some shots of was the Avocet. They breed here and although a little early for any serious courtship action I hoped to get some good views as they fed in front of the hides. The views I certainly had but not close. The water level was very high which meant that the majority of the birds that did choose to rest near the hides were actually a little way off. A couple of shots I did manage and will have to return again in a few months to improve on. 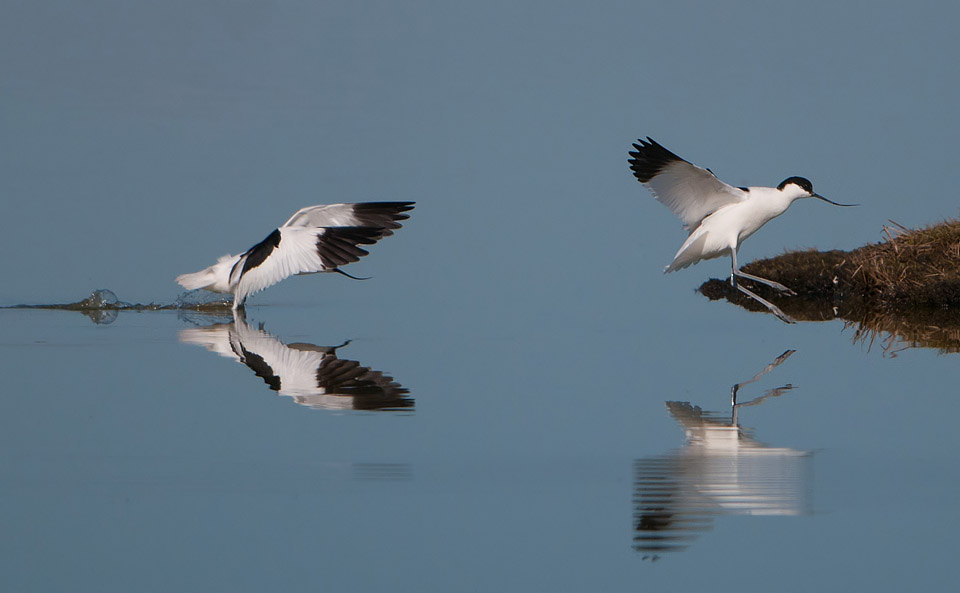 Coming in to land

Another plan I had was to stay into the afternoon and, as high tide pushed the birds that were feeding in the Swale into the reserve, I could catch them flying in as flocks. I hadn’t really thought this through as the amount of laying water across the fields meant that the birds had a massive choice where to land and the majority didn’t come close enough for a photo (lesson learnt!). These Ringed Plover did oblige though.

Inevitably action slows down a little during the middle of the day but my eye was drawn towards a distant flock of starlings (a murmuration) that were whirling in the sky. Their fast and urgent movements suggested their was more going on that met the eye. I’m glad I did. This was a distant photo (500mm + a 1.4 converter) and is a Peregrine Falcon in hunting mode as it hurtled into the flock…. 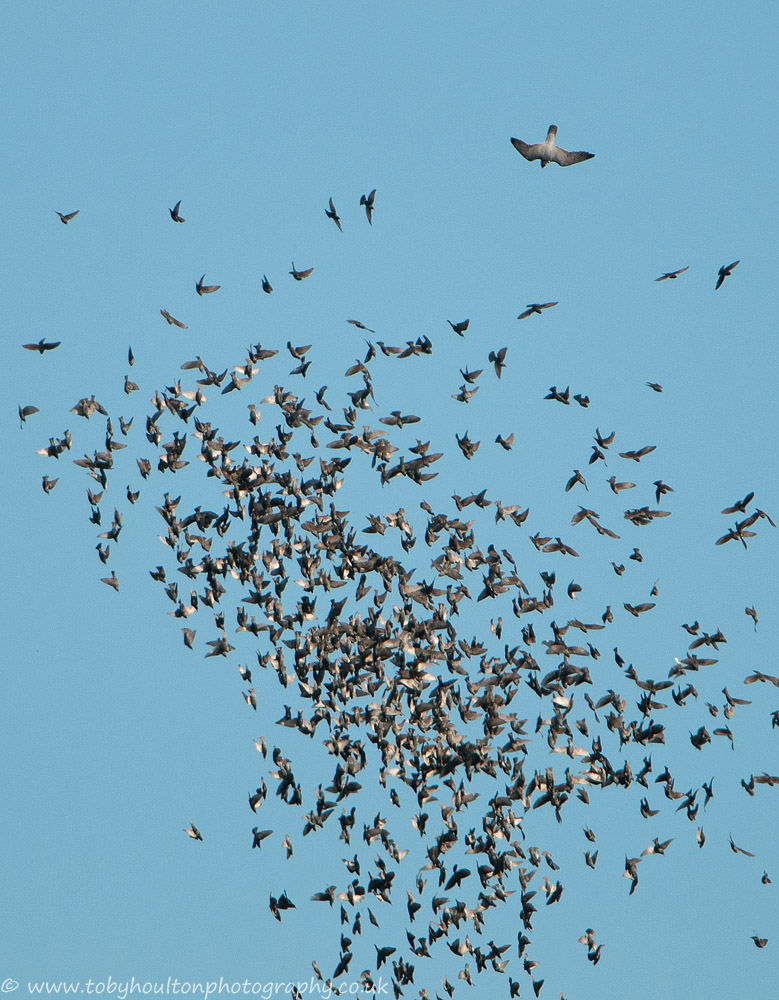 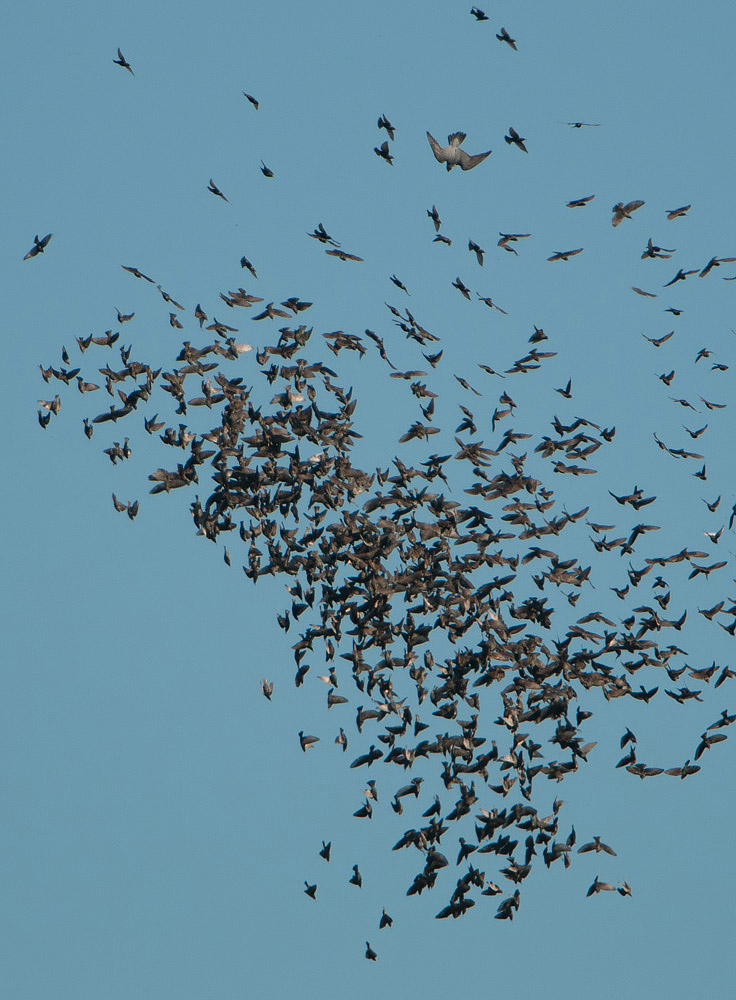 Peregrine among the starlings 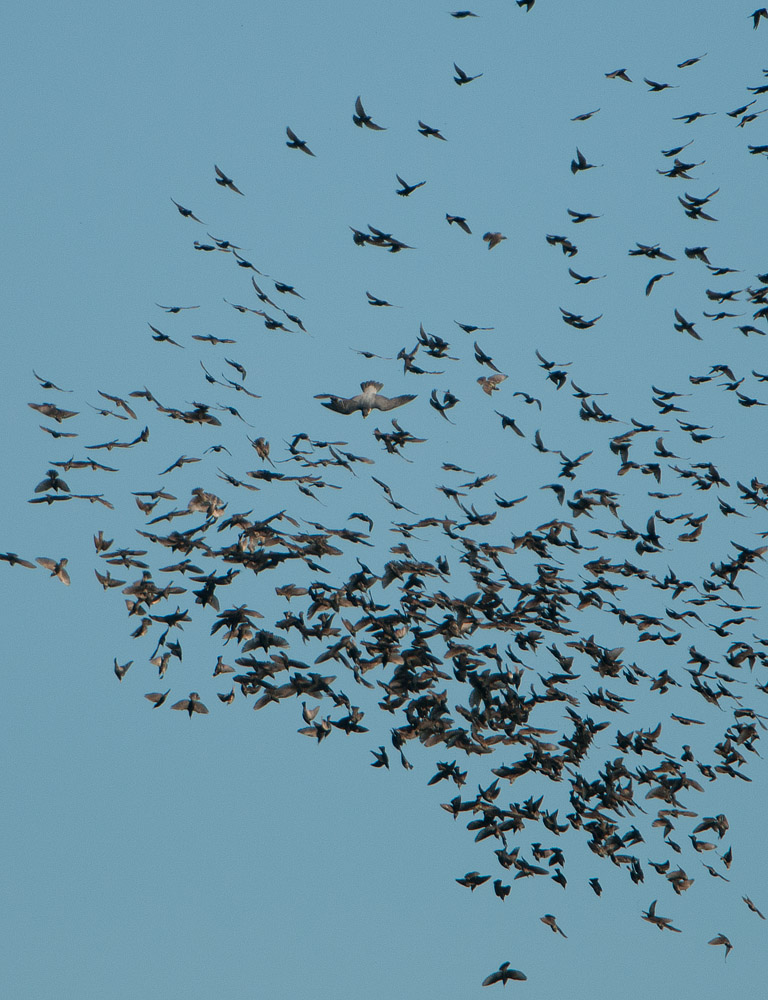 Not a successful hunt this time.

Another bird I had really hoped to see and photograph was the Short Eared Owl, regularly seen at Elmley. Although this owl can be seen at any time during the day, late afternoon is often the best time, especially in the golden light of a dropping sun. I have to send a thanks to Gary Stamp whom I met on the day and chatted to for a while. After a no show from the owl and parting company he appeared again a little later to let me know that the owl was out and about and to keep my eyes peeled. Sure enough the location I waited in was good. I’d love to say that I took some stunning images of the bird hunting across the reeds in the stunning evening light but unfortunately this time it wasn’t to be. Some reasonable views but no good photos still made the wait worthwhile and a quick showing from the local Barn Owl as the light dropped made it doubly so.